It's one of the few games to give me actual anxiety over what was going to happen to characters. 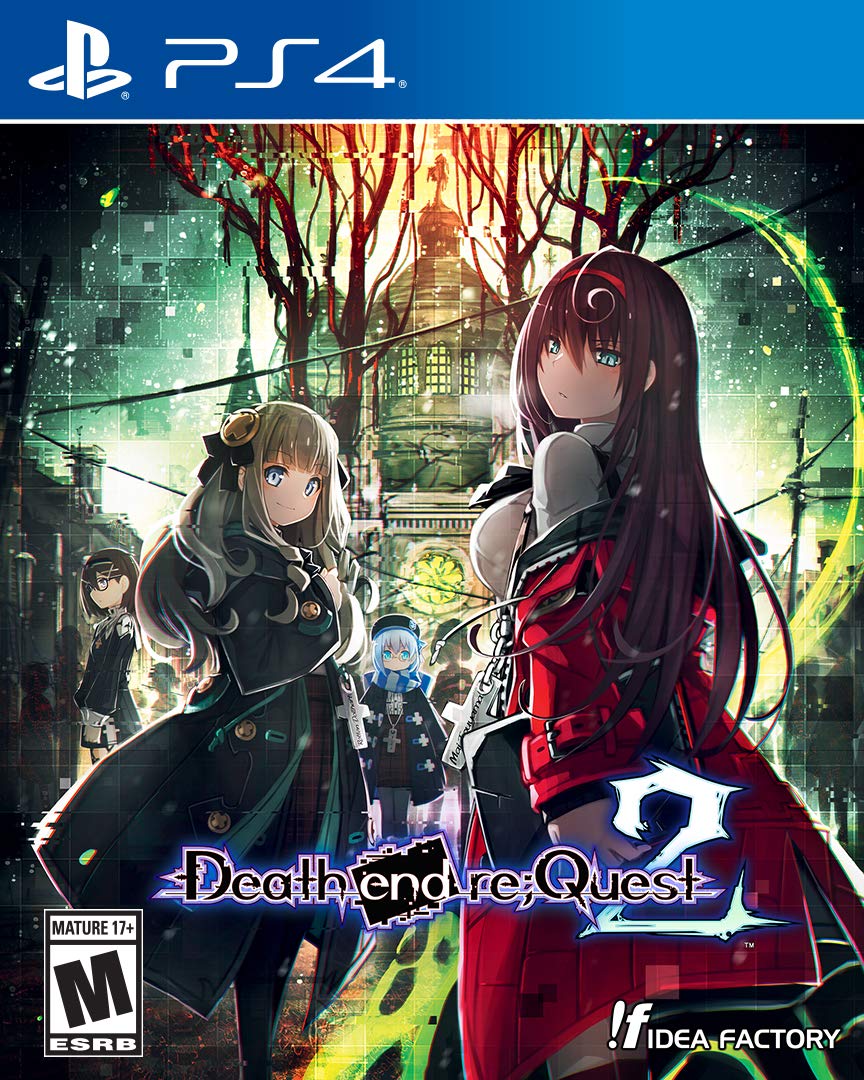 Death end re;Quest 2 comes from Idea Factory and Compile Heart, a developer and publisher combination best known for the Neptunia series. While the duo has shown a tinge of darkness in some of their darker Neptunia endings, they’ve leaned harder into the horror genre as of late. With Corpse Party writer Makoto Kedouin and lead artist Kei Nanameda at the wheel, they’ve taken the plunge into the world of darkness and emerged with some absolutely ghoulish creations. Blended with some fantastic storytelling, the game was difficult to put down.

The original Death end re;Quest was a pseudo-dungeon crawler mixed with visual novel and adventure elements. It flipped between characters trapped inside an MMO and characters trying to rescue them on the outside. The sequel, however, doesn’t span fantastical continents or bounce between realities. All of Death end re;Quest 2 takes place within a single town, where something is obviously and horribly wrong. After brutally murdering her abusive father, the game’s main character Mai Toyama is delivered to Wordsworth, an all-girls academy nestled in the eerie old mining town of Le Choara. As she struggles to fit in with the numerous other students, she immediately begins to notice something is deeply wrong with this town.

Like its predecessor, Death end re;Quest 2 is a mixture of visual novel and JRPG. While the original had more dungeon crawling elements present, the sequel has toned down the confusing map design. The result is something more natural and cohesive, though a bit lacking in complexity. Throughout the day, players will take the lead as Mai, and interact with her fellow students. Daytime activities are performed through a simple, yet colorful map interface. Though many of these are conversations with other girls played out in typical visual novel presentation, a large amount of dialogue is voiced and each character’s portrait is quite expressive.

By nightfall, however, it becomes incredibly clear that Le Choara is a dark and dismal place, full of unsightly horrors which stalk the streets. Once the clock chimes midnight, the town seems to change into a dilapidated nightmare, and by the light of the moon, players can explore bits of Le Choara at a time. Investigating the town feels encouraged and rewarding, with numerous treasure boxes tucked away in little corners — yet caution should still be exercised at all times. Down little alleyways and off in the distance, an unkillable monster might slowly make its way to you. Should it manage to get a hold of you, a terrible fate awaits. Fortunately, when running through the ruined streets, the character movement is smooth and fluid to allow for easy escapes.

With enemies visible upon the map, encounters can almost always be started with the advantage in your favor. Combat is a streamlined version of the first game’s battle system, with a stronger focus on knocking enemies around. Using the Triact system, players can select up to three attacks to perform at once. Players are encouraged to experiment with different skill combinations, regardless of enemy weaknesses, as particular combos can Flash or spark a new attack, though the enemy’s stats and elements should be considered before unleashing a long series of blows.

Without the hacking mechanic of the first game, the battle system can no longer be changed into vague approximations of FPS, platformers, or fighting games. While this may be considered a loss to some, the developers focused more on the core mechanics and came out with a far more solid battle system that feels both streamlined and evolved. The “bugs” — irregularities in reality — littering the field are practically all beneficial to players, granting buffs. The increased focus on buff management and elemental weaknesses pair nicely with the enhanced “knockback” system, which lets one play billiards with enemy bodies. Sending a foe careening into another party member, who then kicks them back and into the walls for extra damage is incredibly satisfying. Blasting multiple monsters about can leave the battlefield looking like a pool table after a break.

On the narrative front, Death end re;Quest 2′s story is where it absolutely shines. From minute one, the story sank its hooks in and made me immediately sympathetic to Mai’s plight. Following the murder of her father, she seeks to find her estranged sister at Wordsworth, where she engages in a vaguely normal daily student life. Though she wears a face of stone when socializing with her upbeat and cheerful classmates — who want to know all about this gloomy girl — Mai’s internal monologue often ticks along, making her an incredibly expressive character. The writers do a wonderful job with the characters and ensure the wide range of NPCs are likable and relatable. There is an impressive level of care put into nearly every non-playable character, leading to many of them having arcs and growth nearly equal to the protagonists.

The non-playable cast has such a delicate touch to them, though some can initially come off as buried in anime tropes. Once players get to talk to them and realize these characters are more than their archetypes, it’s hard not to care when they experience troubles in their romantic or social lives. With how much attention is put upon these NPCs, it becomes a painful gut-punch when the writers decide some of them are going to be killed. Not only will they kill your newfound friends, but they’ll do so in incredibly extreme and unsettling ways, which often left my jaw dropped. While gruesome ends were relegated to Bad Ends as a “What If?” in the first game, they’re commonplace here. Granted, it doesn’t happen to everyone. The writers keep you guessing with red herrings, false red flags, and even some heartwarming events that aim to make you happy — unfortunately, those come hours before breaking your heart.

The writing is top-notch and kept me entranced throughout its entirety. Death end re;Quest 2 is one of the few games to give me actual anxiety over what was going to happen to characters. Somewhere between the warm and glittery anime smiles and the dark and oppressive nightmare scenario, the budding romance weaved between two of the protagonists is endearing and heartfelt. There certainly is a lot of emotional whiplash between helping two friends overcome misunderstandings, Mai’s forcibly closed-off nature and refusal to admit her feelings for her friend, and the hellish descriptions of how many students meet their end. The voice actors deserve a gold star for their enactments in their characters’ final moments. Their willingness to go as far as possible with the death scenes showed they truly cared about the project and put their hearts into it.

In general, the team did a wonderful job of bringing the characters to life. Each voice fits the image portrayed and they succeed in giving memorable personalities to the girls of Wordsworth. The English and Japanese voice acting feel on par in terms of emotion and talent. Oftentimes, games will have a Japanese script full of screaming and shouting, while the English side may get little more than grunts or the occasional shout. The English cast of Death end re;Quest 2 managed to evoke so much emotion in their voices. They weren’t afraid to scream or let their voice crack, as a character had a breakdown or lost their mind. They managed to invoke a sense of fear, despair, rage, madness, sorrow, and even tearful joy. The work of the voice actors elevated the experience and their passion shows.

Visually, with its bright anime aesthetic against a vibrant school backdrop, Death end re;Quest 2 looks wonderful in terms of character design and backgrounds. Though the 3D elements are a little lacking, all of the 2D elements are of high-quality and aesthetically pleasant. Characters’ combat animations look solid, though their non-battle interactions can appear stiff at times. Environments, on the other hand, are quite impressive for what they are. The numerous rune-littered spider legs jutting out of broken streets, glowing bugs scattered along walls, and ruined nature of the town at night are in-line with the tone of the game. Within the numerous environments that make up Le Choara, the attention to detail is impressive and shows a level of care that felt absent within the first game.

Another point where the game shines is monster design. As in the original, many monsters are a blend of two things, often a bug and some kind of creature or body part. Tentacled skulls wander the streets, as canines with what seems to be cordyceps haunt the alleyways. The designers tapped into more traditional horror monsters as well, leading to some terribly maimed humanoid creatures and creepy, faceless little girls wandering the cobblestone paths. The boss design is a series of atrocities, though that’s said in praise. Numerous times, I encountered a boss and simply studied it, either wondering what I was looking at or questioning what inspired the designers to make something so disturbing.

Sound design is solid overall, with plenty of weighty whacks and thuds from the weapons swung. The sound effects used within cutscenes — especially the gory ones — are quite disturbing. The sound team ensured that every death was as uncomfortable as they could make it. The soundtrack is another highlight, with every battle theme giving off a haunted, yet energetic vibe. Heavy usage of piano and strings mixed with some electronic elements grants the game a unique aural identity that had me tapping my toes and nodding my head in almost every battle. There is a fun and spooky element to every track that stuck with me even when not playing. In fact, there’s a lot about Death end re;Quest 2 that remained in my thoughts when I was at work or otherwise occupied.

This entry honed in on the things its predecessor did well, while stripping out some of the less-than-great fluff. That said, there are still some awkward parts to the game which may put some people off. The visual novel presentation can lead to some light pacing issues, while the anime archetypes may be a bit too much for others. The “Glitch Mode” costumes, while considerably tame compared to the first game, are definitely fanservice. Despite a few faults here and there, its numerous strengths make the game worth a look. Stellar writing, endearing characters, phenomenal voicework, eye-catching artwork, a catchy yet haunting soundtrack, and a delightfully dark atmosphere all stand as Death end re;Quest 2‘s strongest points.

3D cutscenes are generally stiff, fanservicey elements may be off-putting to some, occasionally awkward pacing.

A wonderful mixture of horror and JRPG with exceptional writing and heartfelt characters, the game pulls no punches and it won't hold back from showing you a disturbing end to characters you're likely to care about.