Though Death end’s engaging narrative pushes me to reconsider my skepticism of games whose titles include semicolons, this Switch port's monotonous combat system, cookie-cutter progression mechanics, and serious technical failings keep me from dumping this aversion altogether. 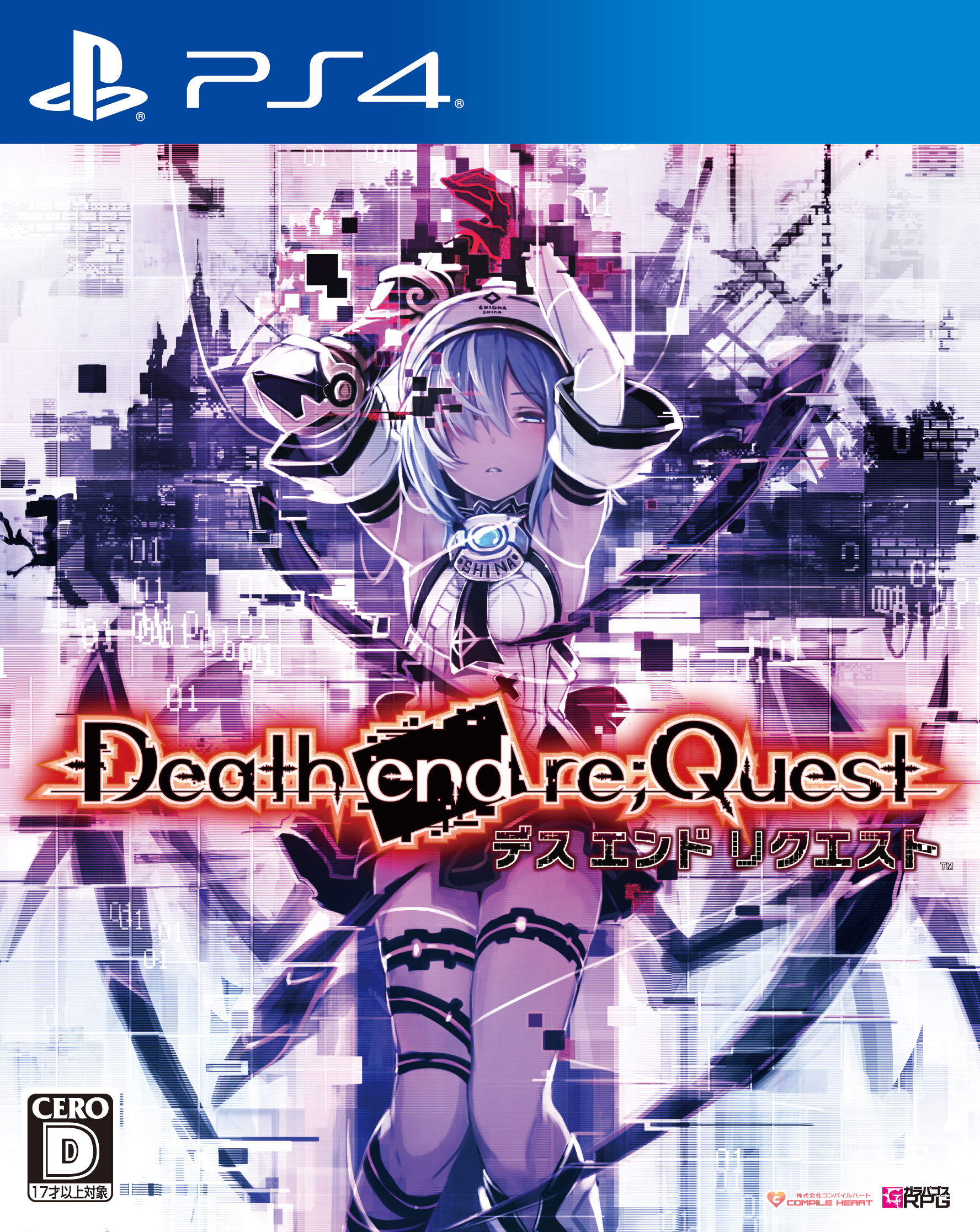 Many JRPGs can be fairly critiqued for centering on overly linear gameplay and progression systems that render them stale as you hit their midpoints. Compile Heart took a stab at responding to this decades-old knocking with Death end re;Quest, a 2018 PS4 game ported to Switch along with all its character and item DLC. Death end ambitiously sells itself as offering genre-revolutionizing gameplay that lets you jump at will between RPG and visual novel segments and tackle combat in the genre of your choosing — as a first-person shooter, strategy RPG, fighting, puzzle, slots, or billiard game.

Clearly, Compile Heart is by no means modest. But do its lofty promises ring true, or does Death end re;Quest fall as flat as the cookie-cutter JRPGs the company hoped it would put to shame? The answer lies somewhere in the middle but close to the latter. Though the developers should be lauded for their inventiveness, Death end on Switch is a deeply flawed game that only shines when you’re flipping the pages of its enticing visual novel.

Death end re;Quest thrusts you into the shoes of game programmer Arata and his co-programmer, Shina. Together, the pair were developing an ambitious virtual reality MMO, World’s Odyssey. When glitches begin to corrupt World’s Odyssey, Shina mysteriously disappears, and the pair’s corporate backer cuts their funding, leaving World’s Odyssey canceled and Arata distressed by Shina’s fate. A year later, Arata discovers Shina is trapped in World’s Odyssey, but she can’t “log off” or remember where her real-life body is or, well, anything else. The duo discerns that for Shina to escape World’s Odyssey, she must venture to its mythical end-game, which is no easy feat thanks to the deadly bugs — literal and technical — plaguing the land. Meanwhile, in the real world, Arata finds himself hunted by rabbit-masked serial killers and an evil mega-corporation as he tries to solve the mystery of Shina’s disappearance that, of course, threatens the whole (real) world.

Though a bit fantastical, this narrative succeeds and is the game’s crowning achievement. Though I’m typically turned off by melodramatic anime, I was hooked on the visual novel that walks you through much of this roughly 25-hour game. Death end re;Quest masterfully blends flavors of horror, romance, and light-hearted comedy that culminate in an engaging tale rivaling what’s sitting on The New York Times Best Sellers list in any given week. One early chapter involving murderous rabbits, a cryptic phone call, and a character’s alarming disappearance had my hair standing on end — literally. Compile Heart’s writers should also be commended for mostly eschewing lazy reliance on tropes in favor of penning characters chock full of personality, humanity, and clear goals and motivations. I found myself caring about many of these characters and their fates, no small feat for a game that presents most of those characters in the form of a handful of still anime drawings.

Nevertheless, if Compile Heart takes a stab at a third entry in this series (Death end re;Quest 2 is already out), it’d be wise to avoid the minor narrative gaffes here. For starters, nearly all of Death end’s chief antagonists remain nameless and faceless until the game’s final chapters, draining my cup of care for their fates and roles in the overarching narrative. The visual novel segments also have an ugly habit of abruptly pivoting from dark tones to jovial ones without any buffer or foreshadowing. Those shifts broke immersion for me more than a few times and could’ve easily been avoided with more graceful transitions between moods.

Finally, the game’s titular “death ends” — abrupt but engaging scenes that toss you to the game-over screen when you select an incorrect narrative choice during the visual novel pieces — quickly became a nuisance thanks to the absence of an auto-save feature. Before I realized the importance of constant manual saves, I hit a death end that forced me to redo several hours of dungeon crawling. As one viral YouTube star says, ain’t nobody got time for that.

Death end re;Quest‘s bright narrative left me keenly aware of the considerable talent at Compile Heart. Perhaps this is why I felt so heartbroken to discover that the game’s purportedly inventive combat system is a chore. Each character has a sequential turn during which they can act using three moves — standard-issue offensive, restorative, and buff/debuff abilities. The game incentivizes a strong offense; by attacking three times in your turn, you knock your opponents back, often into environmental hazards, their compatriots, or one of your party members, in which case your ally gets a bonus knockback attack against your opponents, too. Much like in the Persona series, enemies are vulnerable to elements that underlie your offensive abilities. But unlike any other RPG I’ve played, Death end lets you opt out of RPG-style combat and proceed through battles using the mechanics of a different genre. You can make the switch provided you’ve cleared at least half the environmental hazards on the battlefield — field bugs that drain HP if you wander too close. You can, for example, gun your enemies down FPS-style or gamble on slots that may better buff your team or assault your enemies as compared to your standard abilities.

Though these mechanics sound clever, playing through them feels like a slog. Despite an abundance of options at your disposal in combat, you’ll quickly learn that the optimal recipe for success is almost always to mindlessly spam AOE attacks matching the element to which your enemies are vulnerable. But perplexingly, to identify your enemies’ weaknesses, you need to hop over to the battle overlay screen and set an obnoxiously slow-moving cursor over each enemy. You’re often fighting half a dozen similar-looking monsters at a time, so having to jump through these hoops to identify their weaknesses — and jot them down so you don’t need to suffer through this process again when you forget who’s weak to what — quickly turns into a drag. To boot, battle animations are exceedingly long — think Final Fantasy IX but without the charm — and a palpable lag often greets you as the game transitions between turns. All of this painfully drags battles out for several minutes at a time. And while turning battles into Halo may sound appealing, it isn’t practical; the mechanics for the alternative genres are overly simplistic and feel unfinished. Clearing field bugs off the battlefield so you can “install genre” typically takes up more of your time than would AOE-spamming your enemies to death.

Compile Heart’s touting progression in Death end re;Quest as genre-revolutionizing is also false advertising. Though you can freely hop between World’s Odyssey (where you’ll find RPG action accounting for most of your time in the game) and Arata in the real world (where the visual novel centers), you only progress the narrative by doing so about once during each of the 11 chapters. The game also pings you when you need to make the jump. Shifting from World’s Odyssey to the real world at other times is pointless; you’re stuck chatting with side characters and can’t propel the narrative forward or assist your team in World’s Odyssey. And when you jump to the real world at the game’s direction, you’re limited to witnessing the linear narrative the visual novel has in store for you — and maybe navigating a story choice that can throw you into a death end — before the game urges you back to World’s Odyssey. With that said, there’s nothing wrong with how Death end handles progression, but it’s about as linear as they come and is likely to disappoint fans enticed by Compile Heart’s promises.

To make matters worse, Death end re;Quest performs abysmally on Switch. Once I ventured past the beautifully drawn visual novel stills, painfully choppy visuals greeted me during most of my time dungeon crawling, battling, and even watching cutscenes, no matter how I played. Opening doors produces a several-second lag, and transitioning between zones often involves not just loading screens, but seconds-long pauses, too. While in World’s Odyssey, the game creates an attractive juxtaposition with realistic, 3D backgrounds populated by intricately crafted anime character designs, but these inescapable technical issues prevented me from arppreciating any artistry. Performance issues aside, most enemy and environmental textures are about as detailed as a late-gen PS2 RPG. Given that this is an enhanced port of a three-year-old PS4 game, this is inexcusable.

The game’s audio is less disastrous, but it’s nothing to write home about. Death end’s soundtrack is limited to a handful of instrumental tracks that match the tone of the scenes they support; rock ’n’ roll, guitar-heavy beats fuel battles, while dour violin- and piano-based tunes augment the game’s ample somber moments. But after a few chapters, you’ll realize the game leans too heavily on the same few tracks to shepherd your journey, so they quickly lose their luster. Like many other JRPGs, the voice acting is hit or miss but mostly mediocre. Chris Niosi, the English dub voice actor for Arata, succeeds in bringing Arata’s fearful excitement to life. Unfortunately, the actors behind the English dubs of Lucil and a few other characters often give painfully melodramatic or high-pitched performances evocative of Trials of Mana remake’s Charlotte.

Though Death end’s engaging narrative pushes me to reconsider my skepticism of games whose titles include semicolons, this Switch port’s monotonous combat system, cookie-cutter progression mechanics, and serious technical failings keep me from dumping this aversion altogether. For fans of top-notch visual novels willing to tuck in for the hours of tedium much the rest of the game amounts to, I can wholeheartedly recommend Death end re;Quest — just not on Switch. To all others: steer clear of this one or, if you can’t resist experiencing this odd series for yourself, nab this on PS4 or PC and dodge this technical travesty.

Visual novel fans may want to consider picking this up, but should avoid the Switch version like the plague.