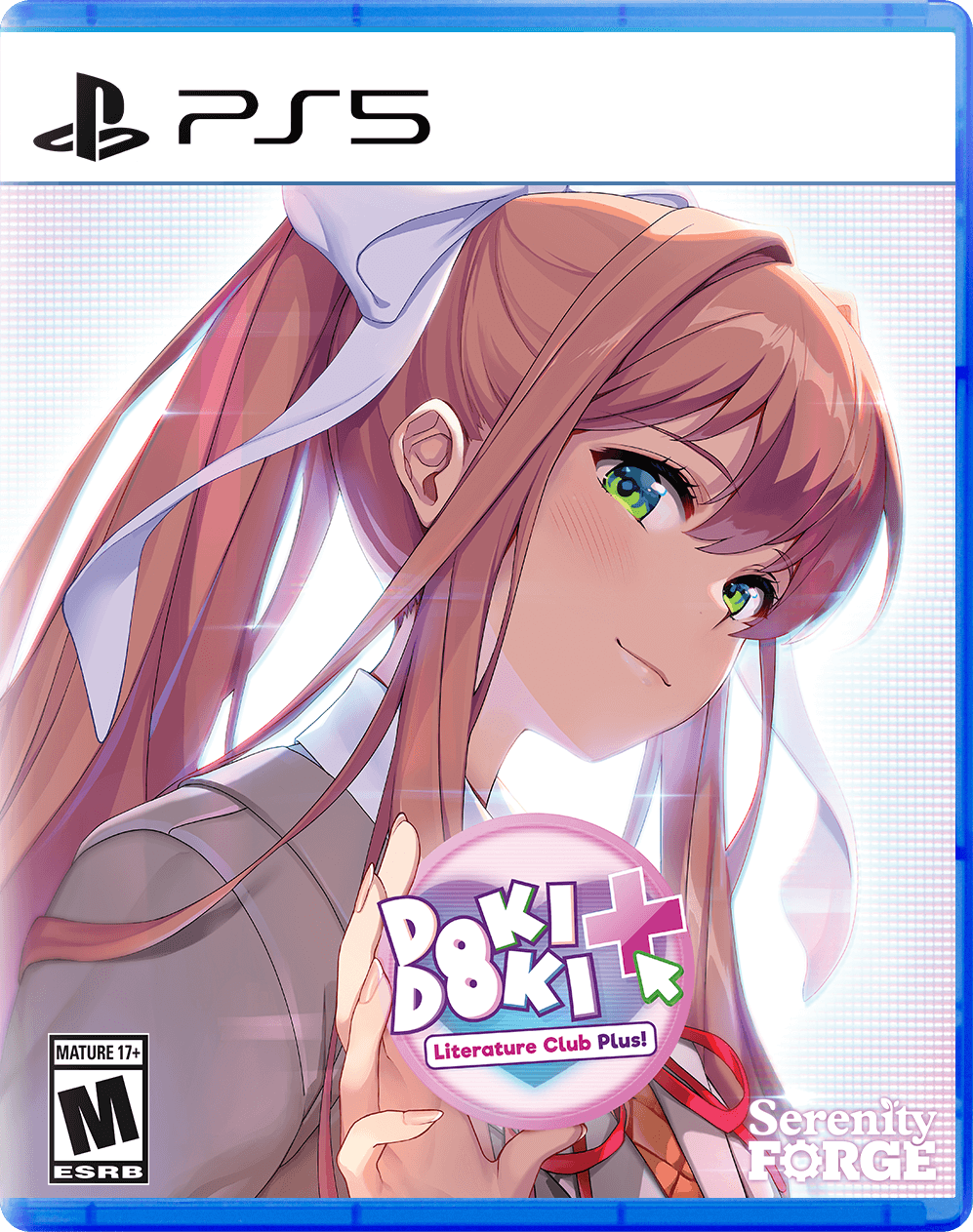 “And thus, today marks the day I sold my soul for a cupcake.”

The moment I read this line early on in Doki Doki Literature Club Plus!, I was hooked. Not only did I find the line itself amusing in its absurdity, but it reminded me of a poignant scene in one of my favorite TV shows. Specifically, it was the scene in an episode of The Magicians where Penny reluctantly joins a book club and eats a cupcake. Although Doki Doki Literature Club Plus! ensnared me from that early line to the culmination of multiple playthroughs, I almost don’t want to review it.

This M-rated game opens with a brief “player discretion is advised” warning and an option to read a more detailed content warning. In addition, there is an option in the settings menu to turn on trigger warnings that show up throughout the game prior to sensitive content. These warnings can be switched on and off at any time. While an unadulterated playthrough offers the most impactful experience, Team Salvato’s inclusion of optional trigger warnings prior to certain scenes is commendable.

My gripe is that the “Enable Content Warnings” text feels shoehorned into an unintuitive place in the settings menu. Said text changes color depending on whether it’s activated or deactivated, but both colors fade into the busy background. Plus, the big “X” that pops up when it’s activated would make some people think it’s deactivated. A check mark would have been a better choice here. I get that several menu and interface idiosyncrasies are vital to the overall experience, but some quality-of-life features could have been utilized, such as larger fonts for the dialogue and storytelling text, larger fonts with higher contrast colors for the in-game menu options at the bottom of text boxes, and more vivid highlighting when selecting a saved game to load. Although the game is available on consoles, I think playing on PC yields the best possible experience because the interface is best optimized for that platform.

The “Plus” in the game’s title refers to numerous enhancements made to the 2017 original, including a handful of new side stories, new music, a smorgasbord of unlockable images, improved graphics, and more. Speaking of graphics, the game looks like a garden-variety visual novel, albeit a rather sleek visual novel. The backgrounds and character portraits are pleasing to look at but don’t have the most original designs. Normally, that would be a strike against any other visual novel, but it totally works in this case. I cannot imagine this game looking any other way.

Since I’m discussing aesthetics, I need to mention the game’s terrific music. I like when soundtracks use variations on themes as the plot develops during a game, and the music in Doki Doki Literature Club does this very well. The wonderful main story music is complemented by the new tracks exclusively composed for the side stories. These new pieces really push the soundtrack over the top and easily became favorites. Nikki Kaelar composed the side story music, and her unique style marries with Dan Salvato’s main story pieces like chocolate and peanut butter. There are also guest tracks by Jason Hayes and Azuria Sky that add a lovely something extra.

Doki Doki Literature Club Plus! puts you in the shoes of a socially awkward, male high school senior who is more interested in anime and video games than joining after-school clubs and making friends. This concerns your neighbor and childhood friend Sayori — a ditzy but well-meaning girl hell-bent on getting you to join a club and be social for a change. Although you want to check out the anime club, Sayori drags you to her literature club, which is in need of new members. There, you meet the moody Natsuki, popular Monika, and demure Yuri. So now that you’re the newly recruited — and only — boy in a club consisting entirely of cute girls, let the harem anime hijinks ensue!

Well… no, not quite. I’ll just leave it at that.

The conventional visual novel gameplay is pretty straightforward until it stops being so in brilliantly subversive ways. I cannot tell you more than that. I can, however, tell you about the mini-game where you craft poetry by selecting words that elicit positive reactions from the girl whose path you want to follow. Yes, writing and sharing poetry is one of the activities the literature club does. While the writing mini-game felt like I was randomly throwing evocative words together, reading the other characters’ poems during club meetings was the true reward because it fleshed them out in unique ways. This is a game that encourages you to read between the lines.

Crafting poetry also opens up the intriguing bonus side stories that chronicle the formation of the literature club and how the girls became friends prior to the game proper. Seeing how characters relate to each other outside the lens of the protagonist is not something encountered often in visual novels, so I welcomed it here. I recommend waiting until after you have completed at least one full playthrough of the main game to view the side stories. I know it’s tempting to go through them as they’re unlocked, but doing so could diminish the impact of some poignant main story scenes.

Doki Doki Literature Club Plus! is capable of eliciting strong feelings. It is not always an enjoyable experience, but it is just that: an experience. When I encounter any work that transcends its medium like this, I take special note of it. I am grateful (for lack of a better word) that Doki Doki Literature Club Plus! came my way, and I strongly encourage fellow visual novel aficionados to join the literature club too.

Yes, the game really is as good as everyone says it is.