I felt for the children's plight throughout the story, but I'd be hard-pressed to remember anything about them. 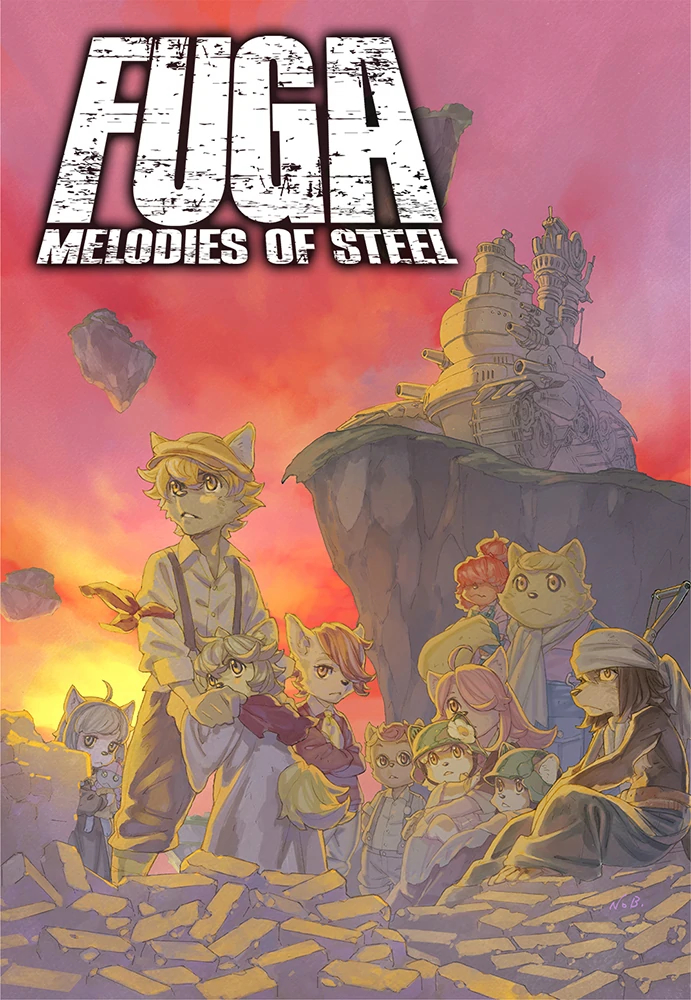 Fuga: Melodies of Steel is the fourth game in the Little Tail Bronx series that includes Tail Concerto and Solatorobo: Red the Hunter. I adore both of these games and would love to see them get rereleased because they’re exceedingly difficult to find and play these days. Tail Concerto was madcap fun, Solatorobo was a bit more serious-minded, and I never played the Japan-only mobile game Little Tail Story. Compared to these, Fuga has the most gravitas of the lot.

You don’t need prior knowledge of the Little Tail Bronx series to get into Fuga: Melodies of Steel. All the games take place in different regions of the same world, and in Fuga‘s case, a completely different era too. The world of Little Tail Bronx may appear cute and cuddly on the surface, but it is anything but that. Evil empires and sinister organizations are always trying to take over, usually by stoking divisive tensions between Caninu (humanoid dogs) and Felineko (humanoid cats) to create unrest.

The tale starts in a tranquil village where a 12-year-old Caninu boy and his friends live. One day, a powerful army violently razes a village and captures the people living there without warning. A mysterious voice via a radio (the kind you listen to music on) urges the boy and his friends to escape to a forbidden cave outside the village. There, they find the ancient tank Taranis, which the mysterious voice encourages them to use to save their families. With everything happening so fast, they have little choice but to go down the proverbial rabbit hole. During their quest to liberate their families, the young Taranis crew picks up other estranged children and find themselves embroiled in far more complex entanglements that offer only more questions and scant answers.

I felt for the children’s plight throughout the story, but I’d be hard-pressed to remember anything about them. There are a dozen protagonists, and as a result of having that many, character development suffers. I knew nothing about these children beyond their surface-level archetypes, and their dialogue was tepid. The text often read very awkwardly with roundabout phrasing and questionable word choice. Conversations never flowed smoothly, and the protagonists (all children 12 and under) read as either too old or too young. The clunky readability and sheer lack of personality found in CyberConnect2’s in-house localization is utterly disappointing, especially considering the wonderful localizations Atlus and XSEED gave us for Tail Concerto and Solatorobo, respectively.

The most charismatic characters are easily the ensemble cast of minor villains faced throughout Fuga: Melodies of Steel. The main villain was pretty generic, but the sub-villains were wildly entertaining, and the cutscenes showing the myriad malefactors’ machinations were the most engaging parts of the story. My favorite nemeses were the stony yet principled General Pretzel (the first boss) and his firecracker daughter Lt. Colonel Flam Kish (whom I first met as a mid-game boss). They were complex, dynamic, and I wanted to learn more about their tangled father-daughter relationship. Sadly, these two, and the other villains, don’t get enough screen time.

Fuga: Melodies of Steel‘s war-ravaged setting is inspired by World War II-era France, albeit with some steampunk elements. The cute yet unremarkable anthropomorphic animal protagonists’ designs use dour colors and muted tones extensively to emphasize the hopelessness of having their families ripped away from them. Animations are smooth, and the game looks more impressive in motion than in still shots. Speaking of stills, it wouldn’t be a Little Tail Bronx game without killer cutscene stills, and the ones found throughout Fuga are nicely drawn. My biggest issue with the graphics is that there are only a few different enemy types, and palette swapping runs rampant. It gets old fighting the same enemies ad nauseam, so a greater variety of enemies would have been nice to make Fuga: Melodies of Steel feel less repetitive throughout its duration.

Unlike the more action-oriented Tail Concerto and Solatorobo, Fuga is an on-the-rails, 2D side-scrolling, turn-based RPG. You trundle from one point to another for most of the game and engage in loads of battles. Travel paths lead from point A to point B with occasional junctures that allow you to pick between a safer or a more dangerous route. The safer routes generally offer more healing points, whereas the dangerous routes may give better items. Regardless, items and healing points are limited throughout the game, so planning your moves and judiciously allocating your resources is vital.

There is no easy mode, and even early battles can be rough if you’re careless. Knowing when to swap out characters, picking the best character pairings, selecting the right attacks and skills, and using turn order to your advantage (knockback moves, like those used in the Grandia games, are especially useful) all need to be taken into consideration. You also need to keep tabs on everyone’s morale because if a combatant takes too many hits, they will be too psychologically browbeaten to do anything.

Luck is also a big determinant for victory, for better or worse. Several bosses, and even some normal enemies, hit hard and often inflict debilitating status effects that are difficult to guard against or recover from. Many foes also have the annoying habit of calling reinforcements several times. It’s very easy to yell “that is so cheap!” or “that is totally unfair!” at the screen, though I admit to having done that multiple times with Fuga. I had to keep reminding myself that I have a cheap shot of my own: the Soul Cannon. The Soul Cannon is a nuclear option that can one-shot any boss at the cost of a party member’s life. Once a child has sacrificed their life to the Soul Cannon, they permanently die. Actions like this have consequences, and Fuga has multiple endings based on every hard and soft decision made throughout the game. I finished a single playthrough in about 17 hours, but there is a New Game Plus mode if you want to try and get a different ending.

There are moments of respite in-between battles, called “Intermissions,” where you can explore inside the tank. Here, you’re able to upgrade the tank, do a ruin exploration mini-game, farm, cook, talk to companions to form bonds (which can open up new partner skills in combat), and engage in a few other sundry activities. Unfortunately, these sections are infrequent, and each one only gives you a limited number of action points to do all of these things.

I found the menus easy to use and access, though swapping out party members mid-battle felt slippery. I played with a gamepad and found those controls adequate, though there is currently no way to remap button commands. Keyboard controls are far worse, though. The keys are not at all mapped where I would like them to be, and again there is no option to remap them. Mouse support is absent, and I would have loved this to help with swapping out party members. The game also does autosave periodically, but I would have liked a manual save option so I could save in multiple slots.

Sadly, I have almost nothing to say about the sound because it’s so forgettable. The soundtrack is made up of basic, by-the-numbers JRPG music that barely even registered on my radar. If the game had no music at all, I wouldn’t be able to tell the difference. The same could be said for the voice acting. Fuga: Melodies of Steel has limited voice acting, and the only voice clips are for phrases here and there. There are options for either Japanese or French voices, but regardless, all the performances sound phoned in.

I have very mixed feelings about Fuga: Melodies of Steel. On the one hand, I’m glad to see that the Little Tail Bronx series still has life in it. On the other hand, this latest entry is largely unimpressive and doesn’t hold a candle to the rollicking good times that Tail Concerto and Solatorobo were. If you are already a Little Tail Bronx die-hard, then you’ve already decided to buy Fuga: Melodies of Steel. If you’re a newcomer, I think you’d have a more enjoyable time with Tail Concerto or Solatorobo.

Fuga: Melodies of Steel has potential, but is nowhere near the level of its predecessors.