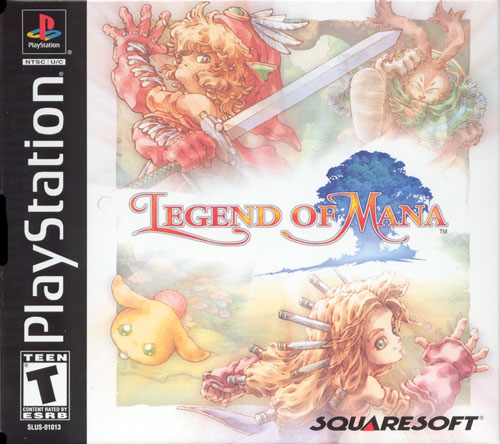 If there is any bad part to reviewing video games for a job, it would have to be giving a less-than-perfect review to a game from Square. I don’t know why, but I just didn’t like this game.

Legend of Mana is the latest sequel in the Seiken Densetsu series, which has entertained fans on Game Boy, Super Famicon, and now on the PlayStation. You take the role of a generic hero (you can choose male or female, but it makes very little difference) on a quest to explore the land of Fa’Diel in search of… well, that’s not very clear. As he wanders aimlessly from town to town, (or desert, mine, forest, lake, harbor, etc.) he bumps into various characters, human or otherwise, that are in desperate need of one thing or another. By assisting them, he receives artifacts capable of opening new areas with new enemies and new characters to assist, except sometimes it’s not quite new. There is a large cast of characters, but some of them have two or three lines in the entire game. People show up, ask you to help them, tell you a fraction of the background story of the situation, and then you strap on your sword (or bow, or hammer, or axe, or… well you get the idea. The weapon selection is quite impressive.) and face a big, mean, scary boss. The game is separated into mini-quests, and because each one is relatively small, the game becomes addictive instantly. It isn’t until well into the game you realize how similar every boss is. The number of Special Techniques is also impressively huge, but once you’ve seen one vague explosion of lights, you’ve seen them all.

The equipment lists are huge. By taking various materials like steel, oak, gold, aerolites, and so on, you can create any type of equipment you’ll need. From armor to pendants, this game has it all. After you build something, you can work on it even more by smashing some Poison Powder or Dragon’s Blood into it in your own personal blacksmith shop. This increases or decreases various stats of the weapon or armor, makes it resistant to different elements, or adds mystical powers with various effects. The only problem is that the entire game could be beaten without any armor almost as easily as with for any experienced player.

Magic is interesting in this game. By going to your personal Music shop, you can create magical instruments by mixing materials with Magic coins that you get from friendly elementals. The magic spell list is also impressive, but only four different spells can be equipped at any time, and doing that gives you no special moves. There is no MP, no healing or effect magic, and each spell has a somewhat similar lightshow effect (there are exceptions) so the magic section of the game is much more simplified in comparison to some of its prequels.

The game’s music is decent. It has several nice songs that you’ll want to stand around listening to for a while, and an impressive boss theme, but with the exception of the untranslated theme song for the game (Does anybody know what she’s saying out there?) none of them really stick in your mind. I do have to note that playing with the musical instruments is pretty fun for a while. The sound effects are very old school and brought back fond memories of SoM. Professor Bomb farting was a bit out of place, but not bad all in all.

Controls are far less responsive than they were in the other games. Outside of battle its fine, but as soon as a fight starts, things get hairy. Unlike the other games, your character can only look left and right, so you can only attack to the left and right. Escaping from enemies is now impossible because you are instantly locked in a group of one or two screens until everything is dead. There are two attack types-Heavy and Light. One heavy attack will force any enemy to back up, which is useful because you can’t move for a second after doing this. Light attacks do about two thirds of the damage of a heavy attack, but you can dish out three to five of them in a row without stopping. Having trouble on a fight? If you do a Light attack and wait until right after you swing your weapon to press the button again, you can keep attacking the enemy forever and he’ll just stay stunned until he dies. This strategy will make an easy game even easier. Whenever you move in a fight, your character can only slide around the screen in a slow shuffling walk, and your allies are even slower.

Experience, money, and items have all been changed. Whenever an enemy dies, he’ll either drop money, experience, both, an item, or a piece of food to restore some health. Experience and money can only be gained by picking up the blue crystals and coins dropped by an enemy when it dies, and the experience only goes to whoever picks it up. The AI is a bit handicapped, making it hard for allies to level up. Items are found everywhere and there is a huge variety, but sadly, almost all of them can only be used to alter your gear slightly or build new gear that is usually worse. As for the food, you get all your life back after the battle and can come back to life in the middle of battle, so life isn’t usually a problem.

Finally, if this game had to be summed up in one word, it would be beautiful. All graphics are hand drawn 2-D without a single polygon to offend the eye. Countless different areas give this game’s levels the feeling of an art gallery. Although they do get old, the spells and special move effects are very well done. Each character has his or her own face shown in the text and has a portrait available in your home encyclopedias, and almost all of them are too cute to be in a Teen rated game, but you still have to love them. Well, not all of them. Although there are no FMVs, you hardly miss them.

Control-Not so beautiful in battle. 65%

Storyline-A bit vague and too linear. 75%

Gameplay-Far too addictive. I used up 12 hours on my first day. 90%

Overall-It might not be Square’s best, but it’s a Square. 80%