Unfortunately, Neptunia ReVerse is as unlikely to please longtime fans as it is to convert the naysayers. 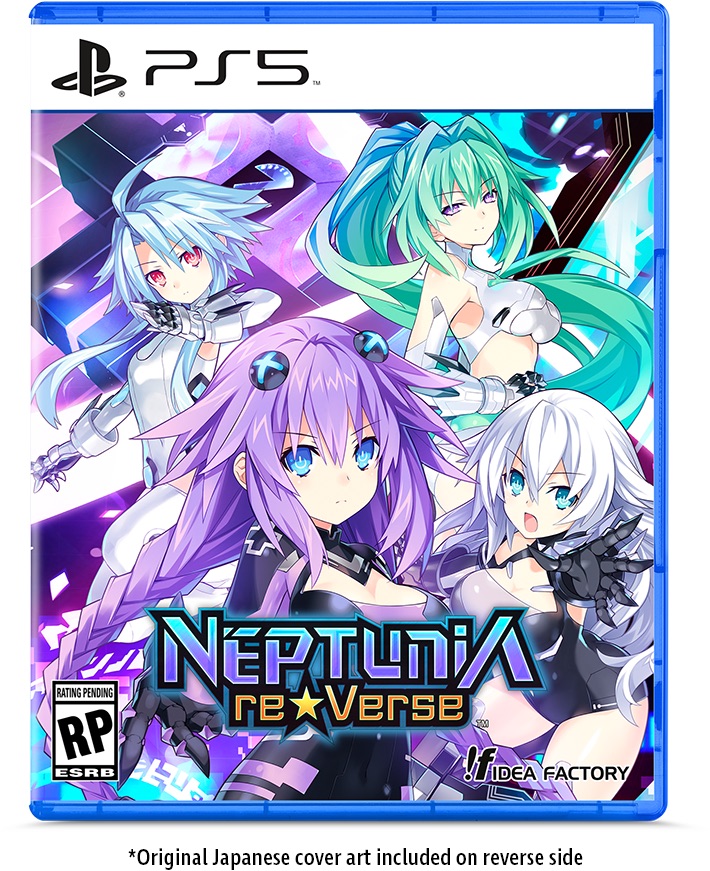 I am Sisyphus, and Compile Heart is my boulder.

The subsidiary of Idea Factory has been around for fifteen years, but one of their most well-known franchises debuted a decade ago. The Neptunia series casts the personifications of the real-world console war (circa 2010) in an endless battle for supremacy in the world of Gamindustri. Promising biting gaming satire wrapped in a moe magical girl aesthetic, the original game garnered a lot of attention before release. Unfortunately, reviewers were unhappy with the release and were driven away by obtuse game mechanics and low production values. Nonetheless, the series garnered a cult following and has persisted to this day, with Compile Heart using the systems built for Neptunia as a foundation for future releases, both in the series and new IPs outside of it, such as Fairy Fencer F.

I was among those turned away by the original Neptunia, but seeing the fandom grow over time leads me to occasionally poke my head into Compile Heart games with an open mind, hoping that the newest release will be the one that finally breaks through. Generally, I find little to love but remain optimistic that the right game will show me the magic the fandom sees.

For the series’ ten-year anniversary, Compile Heart is celebrating by releasing a brand new version of the original game. The first PlayStation 5 exclusive for the developer, Neptunia ReVerse promises the story and experience of Hyperdimension Neptunia with updates that reflect the progress Compile Heart has made over the years. A celebration for fans and newcomers over the last decade seemed like the perfect time for me to take a fresh look at the series and see what Compile Heart’s best foot forward looks like.

Unfortunately, Neptunia ReVerse is as unlikely to please longtime fans as it is to convert the naysayers.

Neptunia ReVerse uses 2014’s PS Vita remake, Hyperdimension Neptunia Re;Birth 1, as the foundation for this release. By this, I mean the core game is exactly the same as it was in 2014. For the most part, you experience the same events, the same characters, and the same areas. Little has changed in the transition, including a few instances where the dialogue mistakenly refers to this release as Hyperdimension Neptunia Re;Birth 1.

The game does make a few attempts to evolve beyond the new release to make it seem like a new game. Every menu in the game has seen an overhaul, complete with splashes of impressive art adorning the main menu. These menus are clean and snappy and represent one of the nicest elements of the game, though the cursor in the main menu is a bit too subtle, and this can give colorblind players like me a bit of trouble.

More significant additions include the new Arrange Mode, wherein nearly every character in Neptunia ReVerse is made available from the outset, and a fishing minigame utilizing the PS5’s haptic triggers. The former offers a lot of flexibility with party building, but this isn’t recommended for newcomers as you can select party members who are not part of the main story. The latter provides the only utilization of the PS5’s unique features. After hooking a fish, the R2 button’s tension gives immediate feedback on how much the fish is struggling and provides a satisfying tactile feel to what is often a rote minigame. But while fishing can offer some decent gear ahead of the shopping curve, it’s still fairly basic aside from interesting controls and is unlikely to be a selling point for most.

These anemic changes leave the heaviest lifting to the original content, which is unfortunate for the developer’s first exclusive outing on the new system. Fishing controls aside, it’s hard to determine what exactly makes this game a PS5 exclusive as limited stock leaves the console hard to get a hold of. Graphically, Neptunia ReVerse hasn’t evolved far beyond the PS Vita rerelease. Animations are occasionally bombastic but usually look stiff. Cutscenes occur almost entirely with static portraits, making characters’ actions difficult to parse when expressed primarily through screen flashes and sound effects. The music is high energy but generally low-depth, rarely diverging from the shallow, saccharine tone of the game as a whole, and this is matched by the energetic, over-the-top voice acting in both English and Japanese. As a result, the audiovisual package looks and sounds two or three generations old. But this is not where the game really falls.

Neptunia ReVerse is most let down by its core systems and their painfully repetitive nature. Within the first hour or so with the game, you’ve seen just about everything the game has to offer. The world map is little more than a point-and-click interface where areas and towns dot a simple, static map. Selecting a town sends you into a submenu with common amenities like shops, side quests, and NPCs. There’s no real sense of travel either, as different towns have the same shops and quests, and “traveling” from one to the other is as complex as moving a mouse cursor. Even with the minimal effort put into each location, players still visit and revisit the same four towns throughout the game.

These are not the most painful revisits in Neptunia ReVerse, however. Dungeon areas are recycled liberally, both along the main story path and in unlockable side dungeons. Perhaps the worst instance in the game is during your first visit to Lowee, the country inspired by the Nintendo Wii, where a prolonged sequence sees you visit three different areas in a row that are all absolutely 100% identical. Different names are given to each area, but they can’t obscure the reused map layout, loot, and even enemies. The second time I saw the map, I was incredulous. By the third, I felt insulted.

But even when visiting different maps and fighting various enemies, Neptunia ReVerse never feels fresh. Enemy and boss tactics never evolve beyond “deplete guard meter, use strongest attacks” right through to the end of the game. Character animations and outfits differ, but you’ll be using the same tactics regardless of who ends up in your party, so your best bet is usually to choose whoever pumps out the biggest numbers. And this part is vital because even though tactics never get more complex, enemy HP numbers balloon over the course of the game, which necessitates a fair bit of grinding through the same handful of maps for higher levels and better gear. In addition, even though the game features a host of characters, they don’t feel particularly unique. Worse, a selection of these (who were DLC in previous releases of the game) join with no fanfare, simply appearing in a town as NPCs after a certain point in the story accompanied by a “party member has joined!” message without explanation.

There are quite a few subsystems meant to lend depth to Neptunia ReVerse, from Guild side quests that change the relative power of each country, to Plans that add new items to shops or modify the parameters of dungeons. On paper, it’s easy to see how these might add some variety to the game, but in practice, they merely lend a small amount of direction to your grind. Plans, for example, point you toward an area or enemy type and task you to defeat a set number of enemies or collect a set number of drops, with no storyline justification, to collect a reward that feels insufficient compared to the amount of grinding still ahead of you.

The last hope for Neptunia ReVerse to really deliver is in its more unique subsystems, such as the Remake System, that promise to turn the game on its head. This system promises to empower players to change core mechanics and change some aspects of dungeons, but it just feeds into the repetitiveness of the rest of the game. Adding Plans on top of this offers more incentives to return, like new enemies in dungeons. Unfortunately, each Plan requires more grinding to find rare drops. The dungeons and enemies are again full of recycled assets, and added equipment and items feel like elements of natural progression locked behind tedious fetch quests. While the Remake System promises a unique meta-system that plays with the concept of playing a video game, it’s simply yet another grind to slow down your experience.

Compile Heart, and the Neptunia series in particular, have the kind of negative reputation that begs you to push through and find the treasure that keeps these games releasing a full decade later. Sadly, if there is a diamond in all this rough, it’s not to be found in Neptunia ReVerse. The repetitiveness of the core experience is unlikely to win over non-fans, and longtime fans will feel disappointed, if not insulted, by the lack of changes from Hyperdimension Neptunia Re;Birth1, and PlayStation 5 exclusivity proves the final nail in the coffin for this remaster in search of an audience.

Neptunia ReVerse fails to justify itself as a new update, a PS5 exclusive, and lacks an engaging core experience. Existing fans have little reason to upgrade from Re;Birth 1, and non-fans won't see anything worth converting for.