The series' great aesthetic and sound design are on full display here, and it is always a joy to see them. 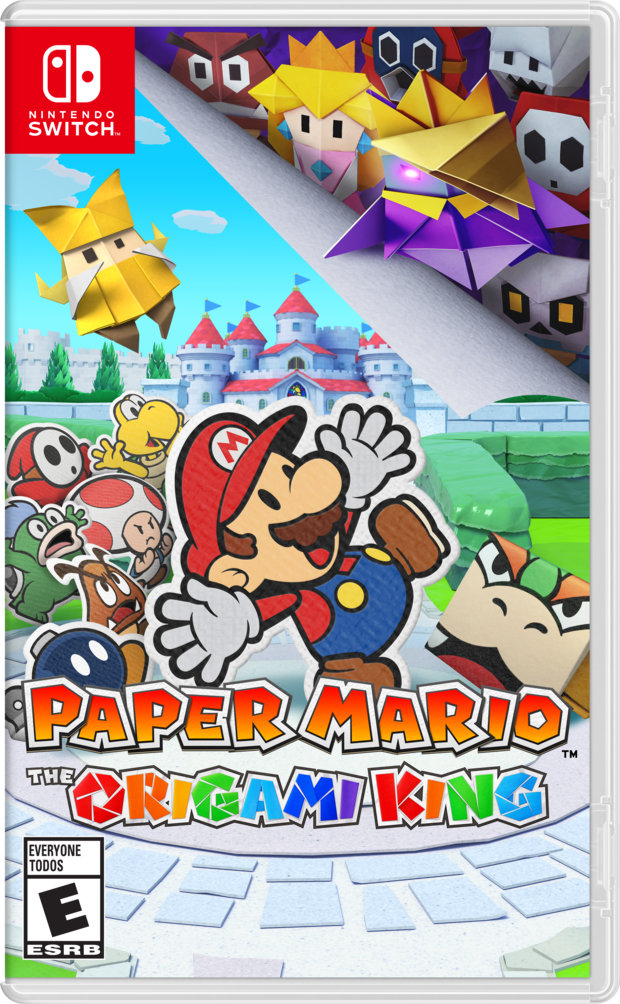 Note: This review contains minor spoilers for the plot of The Origami King involving Olivia.

Opinions are divided among players of the original Paper Mario and its sequel Paper Mario: The Thousand Year Door over which of the two is better, but I think everyone agrees that both are great games. Likewise, everyone agrees that the three games that came after TTYD have seen a drop in quality and an increasing distance between what the games offer and what fans want. Somehow, I’ve still got some goodwill left for the series after how much I loved TTYD, so when Paper Mario: The Origami King was announced this summer, just two months before it was to be released, I was both excited and nervous. Now it’s out, and I’m here to tell you what I thought as a veteran of the series.

In Paper Mario: The Origami King, Mario and Luigi are once again heading to Peach’s castle for a celebration when disaster strikes. This time around, it’s the Origami Festival, and when they arrive, they discover that origami versions of their classic foes are causing trouble. Luigi heads off to find the key to Peach’s castle, she and her castle get taken by the titular Origami King, and it’s up to Mario to destroy the long ribbons leading to the castle, defeat the King, and rescue Peach.

Fortunately, Mario’s not alone. He has the King’s sister, Olivia, to help him achieve a bit of origami-ness to solve puzzles, and he meets a handful of companions who each help him for one chapter of the game. They’re mainly there to help with out-of-combat things like puzzles, but they do join in the fights as well. You have no control over them, but if a turn ends and Mario hasn’t beaten all of his foes, they will typically make an attack that does so.

The story is full of humor, but it includes a surprising amount of emotion as well, particularly where it comes to Olivia. It’s difficult to know that all of the suffering you’re seeing was caused by your brother! That said, I was disappointed with how the game handled one emotional moment — when Olivia learns that a friend of hers has died. She is very sad and heads off alone to spend some time thinking and crying, which is very appropriate. But when Mario finds her again, he does something silly to cheer her up… and that’s it, Olivia is all better! Grieving done. It didn’t ruin my overall experience, but players who have gone through a recent loss and/or who are having a hard time dealing with the many well-known real world deaths this year may have a difficult time with this section of the game.

When it comes to gameplay progression, The Origami King features combat that, as far as I know, is unique in all of gaming, and your facility with it will have a significant impact on your fighting enjoyment. At the start of each fight, Mario finds himself in an arena with four concentric rings that must be rotated and shifted to properly line him up for attacks. In normal fights, Mario is in the middle and needs to line up his enemies correctly to get them in position for either a boot or hammer attack. Doing so in the limited time available gives him a power boost, which means that if you can’t solve the puzzle in the time allotted, your enemies are scattered so that you can’t hit them all on your turn and the ones you do hit are going to take less damage than they should. A double penalty for being bad at this particular type of puzzle — hooray! I regularly solve 80 x 80 picross puzzles, and I once used my understanding of sudoku to make a spreadsheet that solves them automatically, just to see if I could. Which is to say, I’ve always enjoyed all types of puzzles, so learning that I’m not very good at this type was painful, and getting hit by two types of penalties was a nice little squeeze of lemon on the paper cut of my failure.

Fortunately, Mario’s progression to greater strength and health is driven by out of combat exploration and puzzle solving of a more traditional type. So if you’re like me, you can do your best to avoid combat whenever you don’t need some extra money for a shiny new item. Unfortunately, there’s no getting around the boss fights, which have their own twist on the puzzles that I also wasn’t good at. I’ll admit it, I cheated on them. With each new round of combat, I’d take a picture on my phone, send my Switch to the home screen so that no time passed in the game, solve the puzzle in as long as it took, then come back to the game and make my moves. I’m neither proud nor ashamed of this choice — it was that or lose over and over!

The game does include one bit of a return to The Thousand Year Door that helped me a number of times in combat — an audience of helpful Toads. As you progress through the game, you will rescue them from all kinds of predicaments, and the bleachers around the combat arena fill up as you do so. At the start of each turn, you can spend coins (which you typically have plenty of) to have them assist you. The more you spend, the more they’ll help, from throwing healing hearts to throwing cans to hurt enemies and even making the first shift in the puzzle for you!

The previous pair of Paper Mario games, Sticker Star and Color Splash, have relied heavily on consumable items for their attacks, and that mechanic is still somewhat present in The Origami King, but it is much less annoying this time around. You can always make regular boot and hammer attacks, and you can easily find or purchase items to make stronger attacks, like iron boots for jumping on spiky enemies. These items are good for several uses, and their condition visibly deteriorates as you use them so that it’s never a surprise when one breaks. I’m never a fan of breakable equipment, but it’s rare that you actually need the breakable attacks in this game.

Sadly, the game’s combat isn’t properly balanced around the use of these items, which is part of the reason they are rarely needed. For example, you can get Shiny Boots that hit harder than regular boots, but it is beyond rare to find an enemy who does not die using one regular boot attack but will using a Shiny Boot attack. Whether you use those breakable Shiny Boots or not, you still have to attack that enemy twice to knock them out. I reserved all of my stronger attacks for boss fights where they might take a turn or two off of the battle in the long run.

In contrast to the series’ wildly varying combat success, one area where the Paper Mario games have always shone is their presentation, and The Origami King is no exception. The series’ great aesthetic and sound design are on full display here, and it is always a joy to see them. If you’ve played the last few Paper Mario games, you know what to expect here. One of the collectable/unlockable items is concept art, some of which shows you the way things would be made if they were physical papercraft or origami, and I love that.

The controls are also solid, leaving nothing much to note other than the fact that those playing on a Switch Lite need to use the option to turn off the infrequently required motion controls. Those who use a Pro Controller or prefer to leave the Joy-Cons attached to their Switch can also use this option. I tried both ways and opted out of motion controls, as I almost always do when given the choice.

I’ve played just about every Mario RPG, and I’ve reviewed six before this one, but Paper Mario: The Origami King is definitely the one that I’ve had the most difficulty figuring out how to score. The things that frustrated me about it (mainly the combat) frustrated me from start to finish, but I still had a good time with it, and even went back for a set of optional boss battle repeats after I had finished so that I could get an in-game trophy. And perhaps that is the biggest compliment I could pay to this game — I liked it enough that I chose to come back for more of the part I found the most difficult after I had finished.

Great Paper Mario aesthetic and music, lots to do and collect, gameplay feels more like what fans want.

It's still not Thousand Year Door 2, but you'll prefer it over Sticker Star!