Radiant Historia is one of the best Japanese RPGs I've played in years. Atlus has given us a winner. 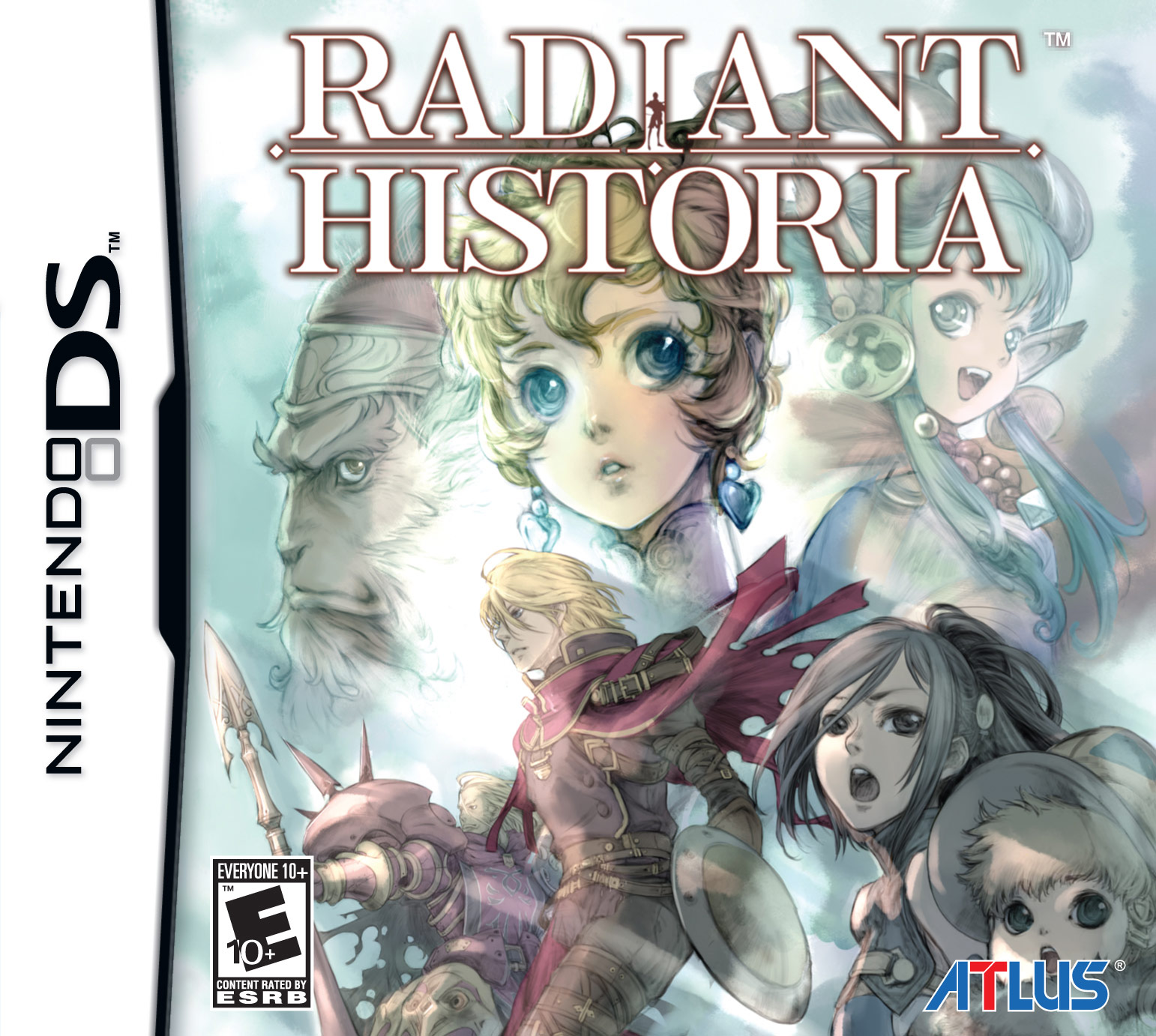 I’ll come right out and say it: Radiant Historia is one of the best JRPGs I’ve been tasked to review since joining the RPGFan staff in 2004. This is one of those games that encouraged me to take extra steps to make an enjoyable experience a truly special one. Allow me to outline those steps I took and maybe you’ll see why Atlus’s latest gem is worthy of a little special treatment.

Step 1: Insert a pair of quality headphones into your DS.

Playing this game with good headphones is important, because Yoko Shimomura knocks the soundtrack out of the park. The music is simply beautiful across the board and makes filet mignon out of the hamburger that is the DS’s limited sound chip. It leaves every other DS RPG soundtrack in the dust! I felt like a child back in the 1990s, playing Final Fantasy VI or Chrono Trigger for the first time and marveling at how stirring the music was, “primitive” MIDI format be damned! Even with the advanced audio capabilities of modern gaming, those soundtracks remain some of the greatest things I’ve ever heard. In much the same way, the quality of Radiant Historia’s soundtrack is head and shoulders above many soundtracks on the bigger consoles and their more robust audio capabilities.

While Radiant Historia’s music may not be quite as memorable as Uematsu’s and Mitsuda’s masterpieces, the fact that it brought about such lofty comparisons is high praise indeed. When music makes me stop playing just to listen to the track loop a few times, I’m impressed. And Radiant Historia’s music goes beyond that by also transcending the limitations of the hardware to become something truly special.

Another great decision in the sound department lies not in what is heard, but in what isn’t heard. The game has no voice acting in it, and I think it’s better for it. If I heard the usual crop of anime voice actors, skilled as they are, reciting the dialogue, I would have enjoyed the story a lot less and not been able to take it as seriously. The decision for classic “silence” was a sound one indeed.

Playing in a well-lit area is best to marvel at the game’s graphics. The polygon environments are the smoothest and most detailed I have ever seen in a DS RPG. The design and color palette make the world quite immersive. The detailed 2D sprites show up very brightly against the backdrops and make the game easy on the eyes for long stretches of time, even when playing an old “fat” DS. And I haven’t even mentioned the lovely dialogue portrait art when main characters converse. There are no anime or CG cutscenes, and no flashy special effects, but this game doesn’t need to rely on smoke and mirrors to dazzle the eyes. It unabashedly says, “I don’t need to hide behind makeup to look hot, because I naturally look pretty darn hot.”.

Step 3: Play Radiant Historia when you can sit back in your easy chair for a long period of uninterrupted time.

The primary reason I stress this step is that this game is pretty long. I spent a good 32 hours with this game, but I was still unable to finish it before my editorial deadline. I wanted to take my time, sniff every rose, and explore every scenic route. Every time I told myself to stay focused on direct progression, I got sidetracked by potential scenic routes and subplot sidequests. And yet I still only saw 129 out of a possible 236 total plot points. I wish I could alter time so I could play the game some more.

Radiant Historia proves that gameplay does not require gimmicks to be fresh and engaging. There are no convoluted License Boards, arbitrary mini-games, or any other such artificial colors or flavors. Instead, the mechanics are clean, simple, and intuitive with easily navigable menus. Characters earn skills as they gain levels, and although there are many playable characters, all earn EXP even if they’re not on the front lines. Money and EXP are earned in turn-based battles that put a mild twist on tradition. Enemy characters are placed on a 3×3 grid, and hero characters must effectively use special skills to manipulate enemy position on the grid for maximum results. Hero characters can even swap turns with each other and with enemies to set up combos. This is very important, even in routine battles, because careless play quickly burns through items, gets characters killed, or both. And let me tell you, items and equipment don’t come cheap, because monsters in this game don’t carry much cash. At least enemies can be seen beforehand and the encounter rate is manageable. The overall difficulty balance is also suitable; the game is never too easy nor discouragingly difficult. Whenever I succumbed to a challenging boss battle, I always wanted to try again, because I knew I could win with some different strategy.

Two minor issues with the gameplay are the lack of a quicksave and somewhat slippery control. I don’t mind save points, especially since they’re part of the overall context in this game’s world. However, since this game is on a handheld platform meant for gaming on the go, I find the lack of a quicksave an oversight. The slippery control is sometimes an issue when trying to avoid or get the jump on enemies, but I got used to it, and most players would see that critique as grasping at straws.

Addendum: The clinching reason for players to do steps 2 AND 3.

As great as the graphics and gameplay are, the real reason I stress playing in a well-lit area with lots of time to spare is that the game is text-heavy. There is a lot to read in this game, and since the plot is so good, players will definitely want to give it their undivided attention. The game provides such an excellent read because Atlus once again delivers a well-written script. The dialogue is more formal than that of a Persona game, but it captures the sense of period very well. Characters develop in a believable fashion, and it’s easy to tell that all of them have skeletons in their closets. Protagonist Stocke is refreshing in that despite his reputation as cold and aloof, he is actually a very caring leader who endears his companions to him and forges strong bonds of trust. When people say they’ll put their lives on the line for him, it’s said with believable gravitas and not as mere JRPG lip service. Atlus definitely went the extra mile on story and narrative.

The storyline takes place in a medieval/steampunk fantasy setting and is an involved political drama similar to those in Final Fantasy Tactics and Tactics Ogre. It also incorporates time travel aspects similar to the Chrono games where Stocke flits back and forth between two alternate realities to make sure history progresses in a way that will prevent the end of the world. The goal is similar to the movie Groundhog Day, where Stocke needs to alter two potential histories in order to craft a “perfect” history where the world doesn’t end.

Although Stocke initially starts out as a secret agent loyal to the Alistel nation, his journey shows him the currently raging war from all sides, including that of the rival nation of Granorg, the desert nation of Cygnus, and the beast-kin territory of Celestia. Every decision he makes has a profound impact on the course of history (both histories), especially since there is someone else tampering with history in nefarious ways. Stocke himself may be faced with some nefarious tasks, such as being ordered to assassinate a rival kingdom’s princess. In this politically charged climate, sometimes one has to do “bad” tasks for the greater good, and there’s betrayal around every corner. This is not a typical high adventure where good is good, bad is bad, and everything is black and white. Okay, a few characters are easily defined as such, but the plot is generally ambiguous, and that definitely pleases me.

Unlike other games of this ilk, where one decision locks you onto a set path to follow, Radiant Historia has players switch between the two main paths in order to progress the game. This is similar to EVE: Burst Error, a visual novel where players followed the two distinct, but intertwining storylines of protagonists Kojiroh and Marina. If players encountered a roadblock in Marina’s path, they’d have to switch to Kojiroh and play his path for a while in order to lift the Marina-path roadblock. However, unlike EVE: Burst Error, Radiant Historia clearly punctuates roadblocks in Stocke’s progress with small hints to circumvent them. This is where players’ real involvement in the storyline lies, in that they will need to revisit and manipulate prior plot points to Stocke’s advantage via time travel. The road to a “perfect” history is difficult, but RPG fans never back down from a challenge.

Even within one main branch, a subtle action like conversing with particular NPC at the right time can open up sub-branches and sidequests. Players who opt for the more scenic route toward the end goal will be rewarded with a better ending than players who opt for the more direct route. It is possible for committed players to achieve 100% completion on their first playthrough, so although the game has replay value, multiple playthroughs are not required. I hit many “bad endings” throughout the game, but was encouraged to try again thanks to merciful do-overs and the ability to skip previously viewed content.

The game’s world is rather small, so the exploration involved is that of traversing between locations in different time periods rather than venturing out into the big wide world. Locations may be few, but they change and develop depending on when you are what you’re doing, so in a sense, the world is as much a cast member as the people in it. I enjoyed having such an intimate relationship with an RPG world. Sure, expansive worlds with a smorgasbord of locations have their draw, but I like the idea of really developing a relationship with a place and watching it develop rather than just doing a quick in-and-out with a place before moving on to the next destination.

Step 4: Stop reading this review and check this game out for yourself.

And this concludes my primer on enhancing your enjoyment of Radiant Historia. Sure, the game can be thoroughly enjoyed without doing the aforementioned steps, but high quality stuff deserves a bit of special treatment, right? And since I’ve already given this review some special treatment, rather than end with a flowery or poetic conclusion, I’ll simply reiterate that Radiant Historia is one of the best Japanese RPGs I’ve played in years. Atlus has given us a winner.

A must–have for every DS RPG library.