Re:ZERO -Starting Life in Another World- The Prophecy of the Throne

...playing this game with a keyboard is, to use one of my go-to analogies, like trying to put a thrashing kitty in the bathtub. 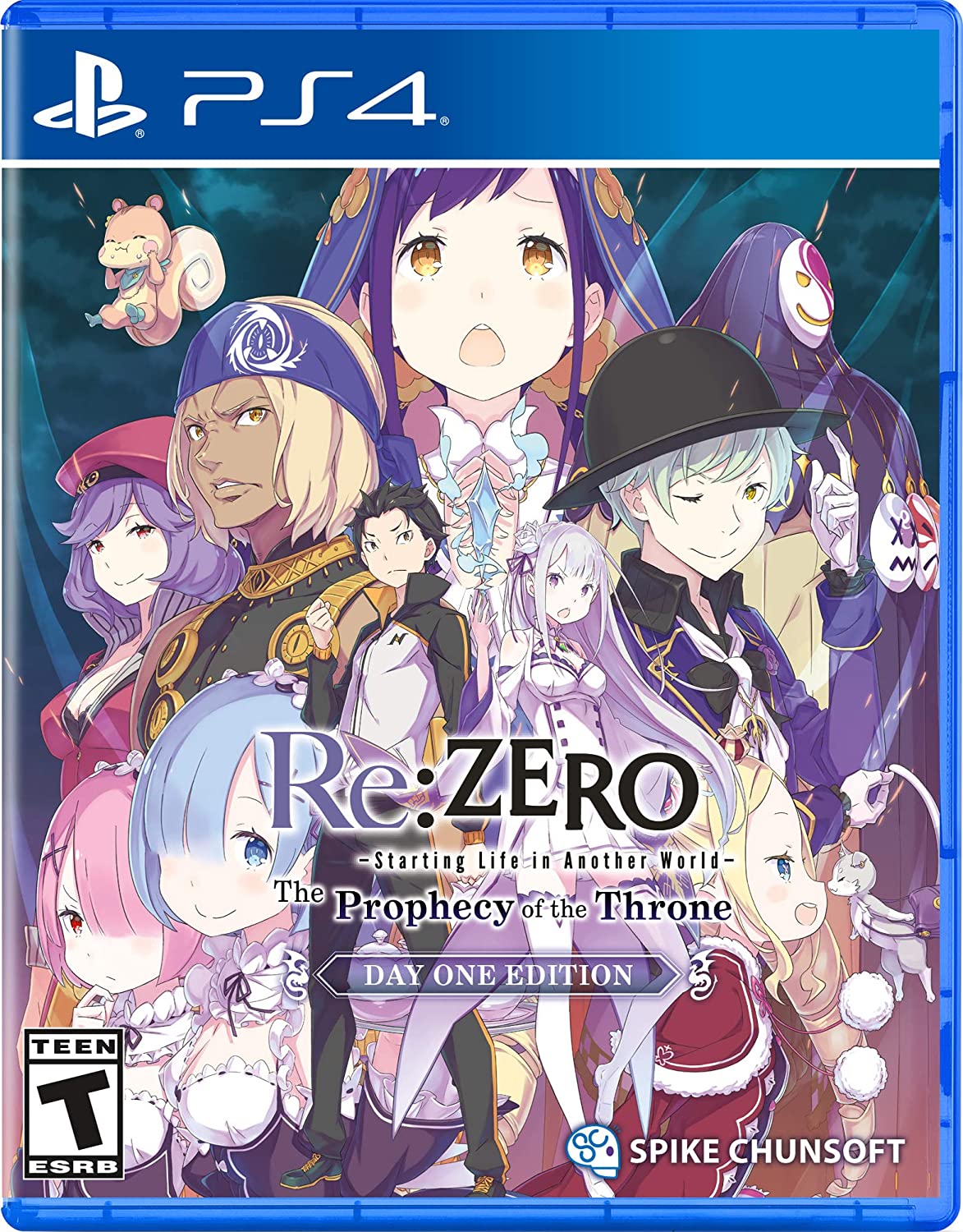 Re:ZERO -Starting Life in Another World- is a popular multimedia entity. It began life as a series of light novels, several of which were adapted into a manga. The manga, as expected, was adapted into an anime series that just finished the latter half of its second season in March this year. There have also been a handful of Re:ZERO video games, but Re:ZERO -Starting Life in Another World- The Prophecy of the Throne (henceforth referred to as TPoT; yes, I am nicknaming the game “teapot”) is the first Re:ZERO video game to release outside of Japan. It takes place a month after the protagonist began his new life in a new world and tells a unique story not found in the light novels, manga, or anime.

For those unfamiliar with Re:ZERO, it’s part of the “Isekai” genre, which basically means “person from our modern-day world gets transported to a fantasy world.” Our person in question here is a slacker named Subaru Natsuki, who finds himself magically whisked to the fantasy kingdom of Lugnica. There, he discovers that every time he dies, time rewinds an uncertain amount, he’s brought back to life, and only he remembers everything that’s happened. After a series of unfortunate events, Subaru becomes smitten with Emilia, one of many young women vying for Lugnica’s throne, and finds his purpose working as her butler, where he discreetly uses his “Return By Death” ability to protect her. Re:ZERO distinguishes itself by offering more gravitas, pathos, and macabre elements than most garden-variety Isekai material, which are key components to its reputation.

So is this game any good? That’s complicated to answer because while TPoT isn’t a bad game, per se, I don’t think it’s that good of a Re:ZERO game. It tries to appeal to both established fans and series newcomers yet falls flat at satisfying either. When viewing this as I would a standard visual novel, the overall storytelling feels uneven. Occasionally, jarring event transitions make the narrative feel choppy, and important happenings seem to lack details. Conversely, there are tangential moments where characters say a whole bunch without saying anything at all. As a Re:ZERO entity, TPoT lacks in the macabre elements that series fans love so much, and anything grim and gory is heavily bowdlerized.

In some regards, TPoT assumes a measure of familiarity with the source material. The summary sequence to get players up to speed is choppy, truncated, and leaves out some crucial details. There are character dossiers in the menu as well, but the information provided in those is not enough for anyone coming into Re:ZERO totally blind. To a series fan, the main characters in Prophecy of the Throne should feel like old friends. To a newcomer, they’re merely likable (or not so likable) anime tropes who don’t make the strongest impression for players who haven’t spent much time to grow with them via the source material. For example, Rem’s (the blue-haired maid in the picture above) demonstrative adoration toward Subaru would be seen as charming to established fans but annoyingly overdone to those unfamiliar with her character development.

On the other hand, coming into TPoT with series familiarity makes the big plot reveal obvious from the start and lessens investment in the tale. There are a handful of new characters in the game who aren’t in any of the other media, but though they don’t seem out of place within the Re:ZERO mythos, none of them made spectacular impressions on me. I’m okay with them being “one and done” characters, but if they were to reappear elsewhere in the future, I wouldn’t be opposed.

The dialogue throughout the game is well-written, despite a few typos here and there. Conversations flowed quite smoothly, and some lines elicited smirks and even chuckles from me. Subaru’s interactions with other characters were what kept me most engaged. His eccentric and unpredictable nature brings out the unexpected in other characters, and I found him more likable than most other anime protagonists of his ilk.

TPoT is primarily a visual novel peppered with some exploratory point-and-click elements and a few SRPG-style battle/mission sequences. The former has Subaru walking around his environments, gaining intel from NPCs, and finding items/objects of interest. The latter features varied objectives like defeating enemies, evading enemies, finding objects under specific parameters, infiltration, etc. The battles play out like simplistic Valkyria Chronicles-type battles, though you can only control Subaru while AI controls everyone else.

Depending on how much Subaru discovers during these exploratory sequences (be sure to talk with NPCs multiple times), decision branches during key scenes may open or close and the available strategies for battle scenes may scale their difficulty up or down. I like the concepts of these interactive elements and would like to see them expanded on in other visual novels. After all, the visual novel is a fairly staid genre, so I always welcome some interactivity to keep things fresh. Sadly, these sequences in TPoT lacked in execution, and more could have been done to give them much-needed depth and polish.

There is no mistaking TPoT was made for consoles because the interface is not PC-friendly. Menus display gamepad controls for button functions, even if you use a keyboard, and playing this game with a keyboard is, to use one of my go-to analogies, like trying to put a thrashing kitty in the bathtub. The keyboard button mapping is all over the place in a very unintuitive way, there is no way to change it, and there is also no menu option to see what each button does. Though I primarily played using a gamepad, finding the menu that tells me what each button does was a little awkward to find and access. I also would have liked to be able to change the gamepad button mapping to something more intuitive for me. And I don’t know if it’s just me, but when the game booted up, my mouse pointer disappeared, rendering me unable to click the menu bar icon to put the game in full-screen mode. Playing in windowed mode makes navigating some of the menus tricky since highlighted icons were difficult to see. If anyone else has this issue, ALT-Enter enables full-screen mode.

The somewhat jumbled menus feel like they were designed by multiple people who did not communicate very well with each other. Different menus (status menu, item menu, settings menu, etc.) seem to have different navigation layouts, leading to a disorganized and inconsistent feel. Some menus have large, easy-to-read text whereas others are cluttered with small icons and utilize a too-subtle highlight color, making me squint to see what icon I’d selected. The flowchart menu outlining the story branches has a blue-and-grey color scheme with high-tech icons that looks like something from a completely different game. The other menus all had a more fantasy-themed parchment-colored tone.

The visual novel portions feature animated character portraits with moving mouths, giving them fluidity and motion not often seen in visual novels. Other than that, the graphics are pretty standard fare for the genre. Unfortunately, most scenes depicting violence and gore are mostly just blank screens, which goes against the grisly elements that Re:ZERO fans love and have come to expect. Even the few scenes that flash a little macabre are quite toned down.

The exploration and battle/mission sequences have Chibi-style polygon graphics that fail to impress and simply get the job done. They also look far too cutesy to punctuate the gravitas that many scenes should have. For example, a mission where Subaru had to get a young woman to safety while a menacing masked marauder was giving her chase felt more like a playground game of tag than a tense pursuit from a threatening villain. A Re:ZERO game should have bombastic battles and these cutesy little distractions are not it. There is also no way to move the camera during these battle/mission scenes, which was a pain when Subaru was behind obstacles, and I couldn’t see where I was moving him.

Players can choose between audio in either English or Japanese, and both are top-notch. The Japanese voice acting is the typical high quality I expect, but the English dub really impressed me. This is easily one of the best dubs I’ve experienced in a Japanese video game. The casting is impeccable, there is not a single subpar voice performance, and even the nameless/throwaway NPCs deliver their scant one or two lines convincingly. The sound effects are nicely done, but I have nothing to say about the music, which thoroughly nondescript.

Re:ZERO -Starting Life in Another World- The Prophecy of the Throne attempts to appeal to both casual visual novel fans and Re:ZERO fans but ends up disappointing both. The macabre elements that Re:ZERO fans expect are all but absent, and the result is a dime-a-dozen visual novel that even casual genre fans would gloss over. That said, the interactive gameplay elements, though shallow, are welcome, and the English dub is par excellence. A single playthrough took me about 14 hours, and there is only one ending. However, clear data unlocks some amusing hidden scenarios, so a second playthrough isn’t a total repeat. TPoT is not a bad game, and I actually enjoyed my time with it, but its compromises and a lack of focus keep it from being a good Re:ZERO game.

Menus lack consideration for PC players who use keyboards, the macabre punch of the source material is toned down.

A compromise of a game that tries to please many but ends up pleasing none.