Sakuna: Of Rice and Ruin
Review by Isaac Parsons · November 9, 2020

Sakuna: Of Rice and Ruin is worth playing not just for those interested in either genre, but for people who want a taste of what indie titles can be. 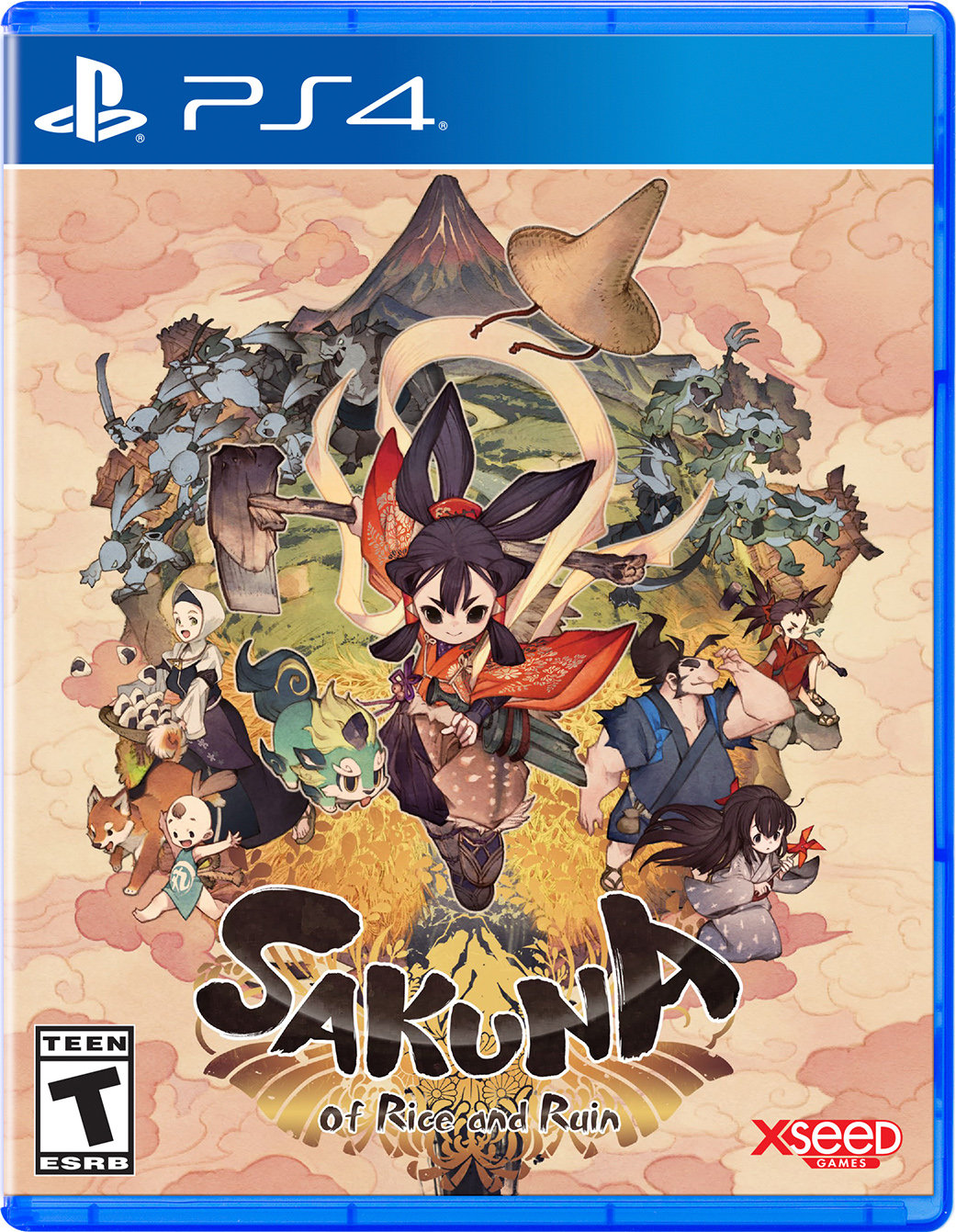 Sakuna: Of Rice and Ruin, developed by Japanese indie developer Edelweiss, leaves a strong first impression due to its gorgeous watercolour-style art and use of traditional instruments to match. You may remember Edelweiss for their 2013 bullet hell title Astebreed, but the two share little in common other than their tie to this talented group of developers. Sakuna is a beautifully styled beat ’em up farming sim with a world heavily influenced by Japanese mythology. It’s been years in the making and, to ruin my own conclusion here, it is certainly worth the wait.

The titular Sakuna is the daughter of a harvest goddess and a war god. After the disappearance of her powerful and famous parents, Sakuna is spoiled terribly and falls into a life of decadence and sloth. The game begins with a blunder involving a group of humans and a whole lot of fire, after which Sakuna and her new mortal companions are tasked with cleansing a demon-infested isle as punishment. Sakuna spends much of the game battling against her lazy nature as she has to fight monsters and farm rice to obtain a future for herself and those she grows to care for. Along the way, she learns how to be a better goddess and a better person, which is reflected in her voice acting becoming less grating as time passes.

Each of Sakuna’s companions has something more to offer than witty dialogue and slowly revealed backstories. Kinta, a rough young boy, offers his services as a blacksmith and forges you new weapons, as well as upgraded farming equipment. Yui, a girl with a secret and a crush on Kinta, weaves you new clothing and hats. Tauemon, a former samurai and bandit, offers farming advice. Myrthe, a motherly figure from a distant country, cooks nightly attribute-boosting meals for the party. Kaimaru, a child who has lost his voice, finds and brings helpful animals to your farm. Each character’s design strongly matches their personality and has a clear silhouette. You are never going to mistake Kinta for Tauemon. Unfortunately, they also aren’t terribly expressive and have only a few animations each.

Sakuna features a real-time clock: a combined day and night lasts about 20 minutes, a season three days, and a year four seasons. The gameplay loop is all about interacting with the real-time clock and makes everything feel enjoyably layered. What you do on a day-to-day basis affects how your overall year shapes up and vise versa. In a given day, you send out your companions to gather materials, spend materials in exchange for your companions’ services, undertake farming tasks, and venture out into the wilderness and dungeons of the island. While in-game passage of time can be overwhelming for some players, Sakuna does everything it can to prevent stress. You’re not locked out of content, you have unlimited years to complete the game, and a year passes quickly, so one bad harvest is nothing to sweat over.

The bulk of playtime is exploring an expanding array of locations in side-scrolling 2D. Different sections of the island have their own aesthetic, which extends to dungeons, and they each change visually with the seasons — a very nice touch. At first, it is easiest to venture out during the day because monsters are weaker and it makes scheduling your time simpler. You can share a meal with your companions to pass the night away, and during this time they will often converse on topics ranging from religion and history to the events of the day. These conversations are wonderful for characters’ growth and exploring their personalities. Later, venturing out at night and facing powerful monsters can offer its own rewards. Each destination also has achievements tied to it. Completing these achievements increases your exploration level, which unlocks new areas to explore. Locations unlock frequently at first, but by the end of the game they are all unlocked and the player repeatedly traverses familiar areas instead. Retreading the dungeons at night — when foes are most dangerous — is enjoyable at first, but it begins to lose its luster before the game is done. This is especially true considering the lack of unique monster designs, to the point where designs are reused even where they make little sense.

Dungeon gameplay in Sakuna is quick to get the hang of, but soon proves itself quite deep. If I had to compare it to another game, I would suggest Muramasa: The Demon Blade, another gorgeous side-scrolling beat ‘em up. Both combat and exploration offer options from the get-go. Sakuna’s divine raiment (bestowed upon her by her mother) can be used as a grappling hook both in and out of combat, grabbing ledges and enemies alike. The raiment also makes up for how sloppy jumping can feel at times. Her scythe and hoe are used for light and heavy attacks respectively and can be strung together for combos. Pressing a different direction when attacking results in a different set of attacks.

Basic attacks and grapples aren’t all of Sakuna’s arsenal; as she levels up, she gains access to various skills. Weapon skills level up as she uses them and become quite powerful. Some, like the dash strike, can even be used for mobility and exploration, allowing the player to reach greater heights and further distances. Raiment skills allow a direction press to attack or debuff grabbed enemies, but these skills are finicky to use in practice and weapon skills are often the best bang for your SP. Occasional slowdown occurs when a lot of enemies are on the screen at once and you activate an AOE skill, but for me, I feel most powerful annihilating all those demons in slow motion.

As opposed to most farming sims, which go for breadth in farming tasks, Sakuna dives deep into the act of farming rice. Unlike dungeons, farming is done in 3D, where Sakuna doesn’t control quite as well, but the freedom to explore your farm makes up for it. Your rice crops will take shape over the entire year, and you gain not only ingredients for food, but levels, skills, and increased stats for Sakuna herself. She is a harvest Goddess, after all! It can be quite an ordeal tilling, planting, harvesting, drying, threshing, and hulling your rice, but Sakuna gains tools and skills to make farming tasks pass more quickly. The amount of rice you gain and the stats granted by your harvest are influenced by factors such as the amount of water you fill the paddy with, how early you plant, and how late you harvest. Most important of all to a successful rice crop is good fertilizer. Any of the materials found in dungeons can be used to create fertilizer, and different materials improve different attributes of the rice, which in turn influence Sakuna’s own growth. Some materials also increase or decrease traits like the herbicidal or pesticidal properties of the fertilizer.

Scrolls found in chests and obtained in trades act as tutorials, with many giving advice on maximizing different characteristics in your rice, but you can choose to care about these as little or as much as you want. I tried each method of growing at least once but eventually settled on increasing each of my attributes a small amount every year. When it comes time to cook your well-earned rice, what matters most is how much you hull it. Unhulled rice is also called brown rice and offers larger temporary stats bonuses when cooked with, while fully hulled rice is called white rice and offers larger permanent attribute increases instead. A good meal can be the difference between feeling underpowered or overpowered for a given area, so having some brown rice handy isn’t a bad idea.

While it’s easy to get caught up in the health of your rice farm and the destruction of demons, Sakuna also tells a tale of a daughter searching for answers about her parents. As you defeat bosses and unlock new areas to explore, the story of Sakuna’s parents and the evil god that once inhabited the island unfolds through cutscenes and dinner conversations. It is in those moments that the heart of Sakuna beats and its themes shine through brightest.

In the end, Sakuna left me aglow with a warm nostalgia reminiscent of PlayStation 2 favourites like Okami, Odin Sphere, or Dark Cloud. Sakuna is a solid title with a lot of fun to be had. It has ambition, charm, and a whole myriad of interlocking systems to dive into. Despite some tedium in the early game and a dearth of content in the late game, the overall package is strong. The rhythm of the gameplay loop never loses its ability to calm and easily leads to a state of video game zen. One part beat ’em up RPG and one part farming sim, Sakuna truly excels in how well it blends these two genres. As far as I am concerned, Sakuna: Of Rice and Ruin is worth playing not just for those interested in either genre, but for people who want a taste of what indie titles can be.

A game for farmers, demon slayers, and pretty much everyone else, too!