Even though Samurai Warriors 5 is an exciting and fresh new entry into the series, it is still a Warriors game. 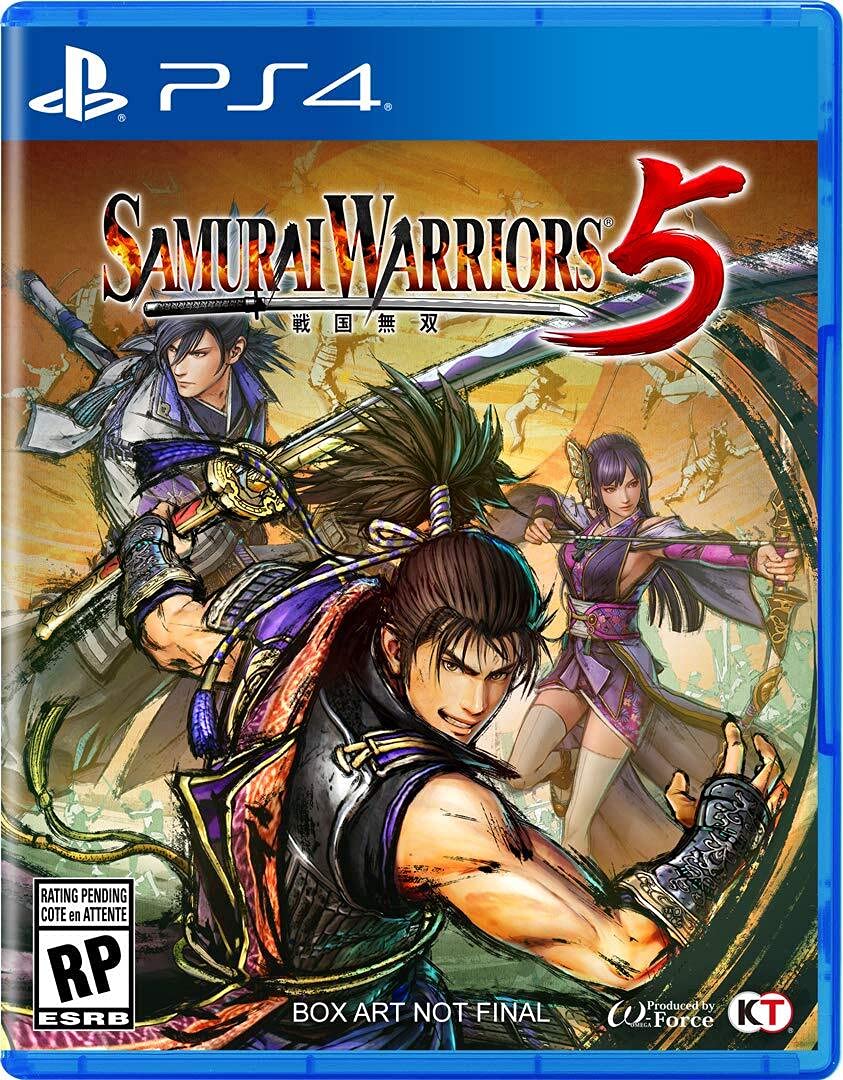 The Warriors series is absolutely gigantic. For the past twenty years, developer Omega Force has been pumping out hack and slash action games across various histories and mythologies. While the bulk of the franchise’s entries are based around historical fantasy, there have been many notable spinoffs crossing well-known franchises such as Zelda, Persona, Gundam, One Piece, and Dragon Quest. With each new entry, Omega Force improves in their endless pursuit of capturing a “One Versus One Thousand” feeling. While many of the games could be written off as mindless mashy action games, each new title has increasingly dipped into action RPG features. With Samurai Warriors 5, we’re finally there.

Samurai Warriors 5 is the latest installment in the Samurai Warriors branch of Warriors games, and it serves as a soft reboot for the series. Omega Force has used this reboot to refresh and enhance as much as possible while still keeping that Warriors soul. A new art style, fresh mechanics, new progression options, and a fully fledged 25-30 hour story campaign are a few breaths of life the developer has given to the series. There is a grand cast of nearly forty playable characters, including many fan favorites sporting striking redesigns and mechanical overhauls.

As this title is a soft reboot of the series, it centers around the infamous Oda Nobunaga as he becomes “The Demon King.” As with all Samurai Warriors games, this entry focuses on The Warring States period of Japan. This period was a time of endless war and strife between military leaders, feudal warlords, and clans of warriors. While I’ve played many games focusing on this time period, I’ve not played one that portrayed The Demon King in a sympathetic light. In many other games, Nobunaga is often depicted as a vile and evil man who lost touch with his humanity and focuses on one goal: the unification of Japan. Samurai Warriors 5 focuses on Nobunaga’s early life as a young, reckless, and punchy underdog who wants little more than to prove himself. Throughout the story, we see just how this man lost his cocky grin and closed off his heart to become ‘The Demon King’ as history knows him.

The story itself has a strong narrative paired with solid writing overall, yet the structure leaves a bit to be desired. While the story focuses primarily on Oda Nobunaga, this is only half of the tale. His friend and trusted ally, Mitsuhide Akechi, has his own path throughout the story mode. His missions often occur two chapters after Nobunaga’s, which feels like too much time passing for players to recall accurately what was happening because chapters are quite long. The writers take a split narrative approach to convey the full story, much like NieR: Automata and Scarlet Nexus. Personally, I love when stories do this, as I enjoy tales with grey morality and new information re-contextualizing events. However, despite my praise, the split narrative structure brings down the overall experience because the pacing of these two paths is too slow.

The story mode, or Musou mode, is the core of the game. Players cut their way through thousands of foes along both Nobunaga Oda and Mistuhide Akechi. The story falls into chapters with primary missions that focus on the main narrative. Side missions cover smaller events such as other commanders’ viewpoints of a single battle or smaller skirmishes between main missions. The majority of side missions allow for multiplayer via split-screen or online. Online play, unfortunately, is limited to previously cleared missions. This restriction is frustrating; I was looking forward to playing through the entirety of the story with a friend, yet I would need to complete the game twice to do so. Outside of Musou mode is a Citadel mode that serves as a means to gather materials, items, experience, skill points, and more.

Samurai Warriors 5‘s gameplay is pure action RPG. Players have an array of stats raised through leveling, each character has a skill tree that serves as the primary means of progression via skill points, and players can craft and improve their weapons with leveled stats and abilities. Ultimate Skills also add another touch of customization by giving the player four skill slots mapped to a shoulder button plus a face button. These dramatically change combat and provide a more significant degree of freedom to one’s playstyle, though they can reduce the game to little more than a brainless mash fest at easier difficulties. I found far more enjoyment playing on Hard as it felt more balanced in terms of officer battles. Thankfully the developers reward players who ramp up the difficulty by increasing rewards.

Samurai Warriors 5 is a polished and seemingly higher-budget entry into the series. The art style is reminiscent of sumi-e with vibrant colors. A visual motif covers nearly the entire game, from eye-catching menus to dazzling special attacks. Character portraits are gorgeous in the menus, but players find a stylish portrait of their character finishing their move when using a special attack. There is a unified art direction that proves itself as one of the game’s strongest points. Understandably, the characters in Samurai Warriors 5 are the standout attraction, but I wish the environments received a little more attention. While they’re adequate and more visually impressive than their portrayals in previous entries, I would’ve liked more fantastical elements to make the maps distinct. Even some simple weather effects would’ve added a little more personality to each level. After all, mountain paths lined with a hundred soldiers do start to blend together in my memory after the fourth or fifth area.

When it comes to music, Samurai Warriors 5‘s soundtrack is also impressive. The OST is a mixture of classic Japanese instruments paired with modern synths and guitars. At times, it can sound like a heavy metal soundtrack laden with folk instruments, which adds a sense of excitement to the conflicts you’re engaged in. The music is often overridden by the absolute chaos you’re creating while slinging waves of fire through thousands of enemies, yet the soundtrack does stand out during quieter periods where you’re running from group to group. Each track in the menus is catchy, and I found myself nodding my head more often than not. The soundtrack has a sense of elegant experimentation that feels like an ambitious melding of styles that manages to succeed.

Even though Samurai Warriors 5 is an exciting and fresh new entry into the series, it is still a Warriors game. Players still cut down hundreds or thousands of men in one map, wipe out entire encampments of soldiers with flashy moves, and face off with officers while dozens of troops look for a chance to strike. There are no spectacular set-piece boss fights despite some of the dramatic introductions. However, engagements can be more defensive and skill-based when played on higher difficulties. Thanks to the updated lock-on mechanic, one-on-one fights can feel like a duel to the death in the middle of a battle. Of course, with a cast of 37 characters, there are plenty of exciting gameplay mechanics to try out, new special attacks to see, and new weapons to gain and improve.

Though there are a lot of great things about Samurai Warriors 5, it’s not without its flaws. As mentioned previously, the online play is restricted to maps that are already clear. The story structure weakens the otherwise strong narrative. While there is a progression system that makes leveling up incredibly rewarding, that feeling stops once you hit level 25. After that, there are simply stat increases with nothing exciting or new when leveling up. It can be a little disappointing to find nothing new for your favorite character. Thankfully, with a cast this large, it’s easy to find a second or third favorite, and playing multiple characters is crucial thanks to the quick-swap partner system.

Samurai Warriors 5 is a breath of fresh air that shows the developers have learned a lot from their previous entries. They’ve taken pieces of their spin-off games such as Persona 5 Strikers, Hyrule Warriors, Fire Emblem Warriors, and even their Dragon Quest Heroes entries. Omega Force took a look at what players of the aforementioned games like beyond general fan service involving their favorite games and used it to reinvigorate their long-running Samurai Warriors series. If you’re someone who tried one of the spinoffs and liked it, or if you have even a remote interest in The Warring States period of Japanese history, this title is a perfect place to jump in. While there is room for improvement upon, Samurai Warriors 5 is a strong foundation for future entries. With Omega Force’s track record of releasing expansion packs and side games, I’m eagerly awaiting more.

Story structure can be confusing, objective pop-ups can be distracting, lack of English VA makes in-battle dialogue difficult to read in the middle of fighting, character progression stops too early.

Samurai Warriors 5 is a breath of fresh air that breathes new life into the long-running series. The new coat of paint and new mechanics make the game fun to play and pleasant to look at.