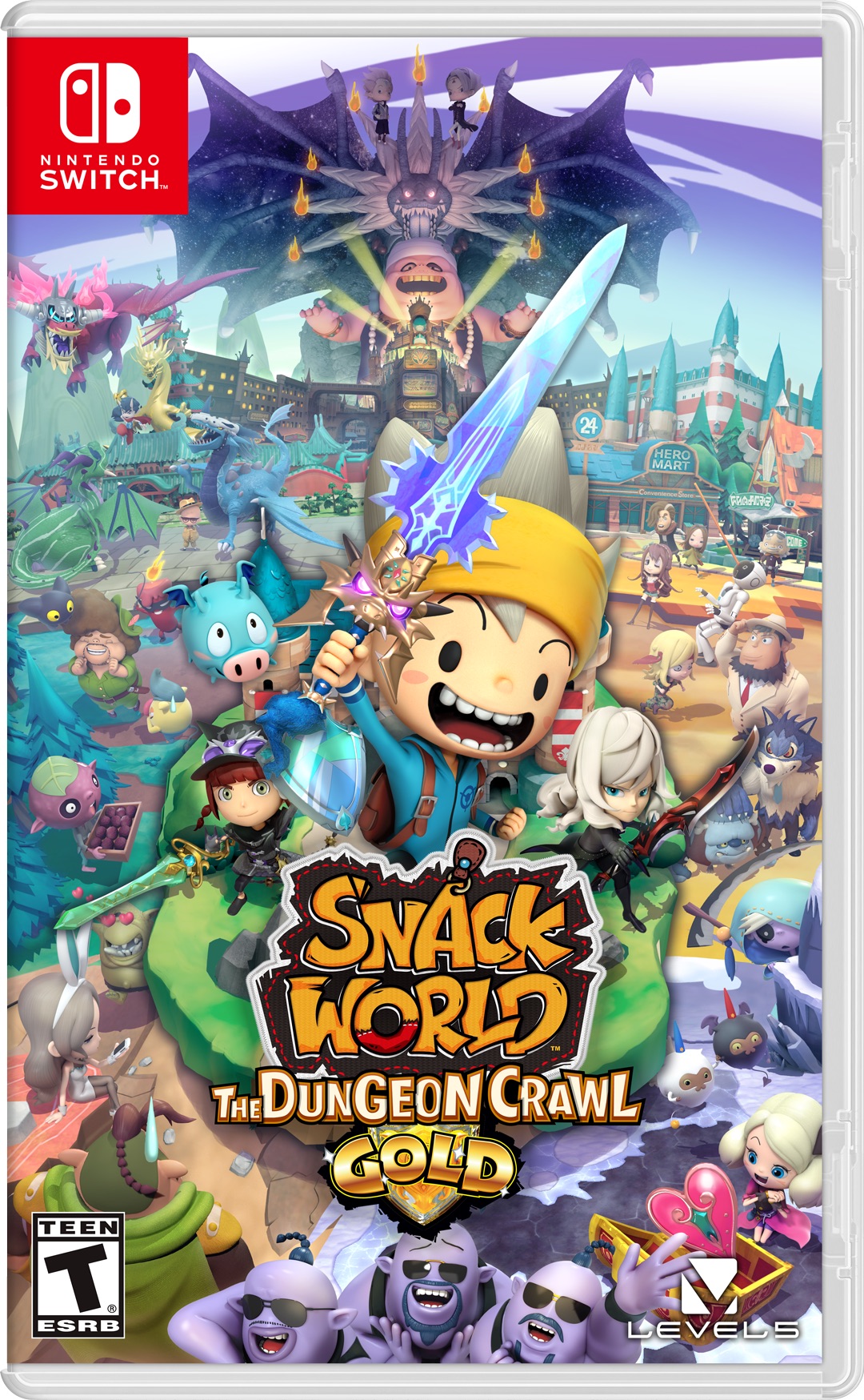 When I think of Level-5, I think of charm and whimsy. With such beloved entries on their menu as the delightful Professor Layton and the magical Ni no Kuni, they’ve certainly solidified themselves as masters of crafting endearing worlds and charming characters. It no doubt leads one to wonder if Snack World: The Dungeon Crawl — Gold cuts the mustard not only in general, but as Level-5’s newest entrée. While there’s definitely plenty of whimsy, the charm is hampered by hefty amounts of randomness.

I know there’s always a desire to avoid putting all your eggs into one basket, but spreading your jam too thin is just as much of a problem.

Snack World is a dungeon crawler RPG with a real-time action battle system. Players can equip up to six weapons and two consumables — collectively called “jaras” — to bring with them into their accepted quest. For the most basic mechanics, you have simple attacks on the Y button, a special attack on X that charges over time, and a super that can be used after filling a gauge by landing enough hits. While it’s nice to believe that additional actions such as roll dodges and blocking add depth to the gameplay, it’s in truth bitterly repetitive, focusing on mashing Y until the X-button special attack becomes available. Having access to six weapons to switch between at will and target enemy weaknesses is unique and makes Snack World distinct, but the simplistic battle system makes the art of weapon juggling feel mundane — no matter what differences exist between the weapons, such as the sweeping arcs of the axe or the jabs of the spear, all you do is mash Y until X is ready. And when it comes to hordes of enemies with plentiful AOE attacks, the more nuanced commands of rolling and blocking only slow gameplay down.

It’s impossible to cancel out of animations or combos, so if you’re trying to cook an enemy’s goose and they suddenly rear up for a massive swing, pressing ZL to block won’t register most of the time as you continue with your combo. Slowing your assault and allowing time to respond to the enemy’s heavy hits drags out combat and can taste especially sour when squaring off against a large group of enemies because roll dodging isn’t on the menu — not practically, at least. Because you can’t walk through minor enemies or their corpses, it’s all too easy to get sandwiched between a rock and a hard place on the battlefield: staring an offensive puts you at risk of not being able to block the opposing onslaught, but waiting with shield in hand only welcomes more enemies to crowd around you. The best defense may be a good offense until you realize you or your party members are eating dirt — and healing is frighteningly scarce in Snack World.

Aside from story-specific guest NPCs, your party in Snack World consists of a fully customizable self-insert player character and Snack allies. There are over 200 generic enemy “Snacks” — although most are not actually food-themed — and any of them can be recruited after defeating a certain number of the same species. With such a large buffet of diverse options, there are bound to be numerous designs to fit any tastes. I found my mouth watering over some especially cute designs, such as Copybat and Will ‘n’ Wisp. But no matter how cute they may be, locating them can drive you bananas. Missions will show you six common Snacks available, but others are not disclosed. The Pix-e Pedia function will list all the Snacks you’ve seen, but not tell you anything about where they can be found, so searching for more uncommon Snacks can feel entirely random. And the icing on the cake has to be Snack World‘s jaw-dropping difficulty spikes combined with heals being so crucial yet so rare. You find yourself fridging your favorite new Snacks in favor of “support” Snacks a lot of the time. It was a very bitter pill to swallow to finally find enough Carrybuncles to recruit one, only to have to set it aside so I could bring multiple healing-focused Snacks with me on missions.

These massive difficulty spikes combined with repetitive gameplay leads to an incredibly grindy game. You’ll find yourself returning to already-completed missions again and again to grind up levels and look for loot — all randomly dropped — for the sake of creating and upgrading gear. Admittedly, this wouldn’t be such a scare if the game didn’t relish in its utter randomness. Although there’s always bound to be some random elements in any RPG, Snack World celebrates it. There’s no way to guarantee certain special drops from bosses the way you can in other dungeon-crawling game series such as Etrian Odyssey. As such, if there’s a certain material you need for creating or upgrading gear (equipment) or a special “grand prize” jara drop that can only be obtained from a certain mission, be prepared to mash that Y button until the cows come home. And there’s no quality-of-life feature to automatically explore or battle in missions you’ve already completed, so there’s no way to make the grind even remotely bearable. New special jaras get added to certain older quests once you reach Chapter 5 as well, so Snack World actively encourages players to retread old ground no matter how dull it may be.

Admittedly, the gear creation and upgrading — fabrication and fortification, respectively — is fun and worth savoring. Although retrieving the ingredients to create or update your items is a chore, crafting the concoctions is rewarding and lets players focus on what they want to. I’m especially nuts for the utility and style gear systems. Items equipped as utility gear give you their stats and passive effects, while style gear changes your character’s appearance. And if you match the daily — yep, that’s in real-world days — “hot style” you can even gain some bonuses. You can cook up new equipment with better stats while keeping old favorites that you simply like the look of, or try to build up a wide assortment of styles for the daily benefits. No longer will you be caught with egg on your face, venturing into dungeons with armor whose stats you need that disappoints your visual tastes. It also helps that most costumes in Snack World are sleek and fashionable, covering a wide range of styles. You can also use loot from the dungeons to spice up your equipment, increasing their stats so you don’t fall behind. But you won’t be making the most of this system right away — the first few chapters of the game are a complete slog, with the currency, gravy, being shockingly scarce. The recipes given to players by default require items that are incredibly rare or flat-out unavailable until a little later, and new recipes cost gravies you don’t yet have. And again, getting specific materials and even weapons from missions is entirely random, so right away there is slow progression and a lot of repetitive grinding.

This isn’t to say the gameplay is half-baked, but players have a lot on their plate, which gives Snack World many distinct flavors. The repetition and randomness make it closer to fast food — good enough to the point where you can justify returning sometimes, but there are better meal options out there that are more worth your time. So what can elevate Snack World from a fast food joint to a gourmet restaurant? That would be the classic Level-5 whimsy and charm. Snack World attempts this through heaping helpings of humor. Unfortunately, the comedic style is just as random as the loot drops.

I know there’s always a desire to avoid putting all your eggs into one basket, but spreading your jam too thin is just as much of a problem. With an opening music video focusing on the joys of eating pork chops, Snack monsters based on boogers, and a negative ailment wherein you have too much flatulence, the humor comes across as notably juvenile in nature right away. That is, until the particularly perverse portions are brought out of the oven. It’s candidly confusing to see blatant references to fetishes or surgically enhanced breasts in a game that establishes an appeal to a younger audience early on. Just as the Snacks are not all food-themed, the humor is similarly all-over-the-place. From fourth-wall-breaking and unsavory stereotypes to the entirety of Chapter 2 being one giant poop joke — initially a large concern of mine, thinking Snack World focused predominantly on food-related jokes — each individual scene is so drastically different from the last that there’s a strong chance you won’t be chuckling all the way through. Some jokes will certainly bear fruit (I definitely found myself having a good guffaw from time to time), but unless you find literally everything but the kitchen sink funny, there will be more cricket chirps than legitimate laughter. More interesting characters do show up, but it takes more than half of the main story for them to make their appearance, and even then they’re still nothing to write home about.

There are even moments when Snack World tries to be serious, such as when your stereotypically-amnesiac self-insert character remembers their Tragic Backstory, but they come across as entirely flavorless due to the unrelenting attempts at nothing but comedy up until those points. Games such as the Phoenix Wright series successfully tread the line between silly and serious because serious elements are utilized early on and the tone of humor remains consistent throughout the game. With only random pinches of seriousness sprinkled throughout the story, they just don’t work in Snack World, and again the humor is anything but consistent. And while fast forward and skip buttons allow you to ignore any and all writing even on your first playthrough, doing so leaves the game leaning entirely on its gameplay.

There’s a lot to digest when it comes to Snack World, and like red bean paste, you either love it or can’t stomach it. If the idea of a glorified casino with a simple battle system and insane level spikes makes your mouth water, Snack World is a dungeon crawler worth delving into. There is in fact a significant amount of content with side quests, crafting, and collecting that gives prospective explorers plenty to take part in. But the gameplay still turns up incredibly repetitive, and the smorgasbord of comedy styles makes it even more tedious getting from one dungeon to the next.

Randomness makes gameplay into a grindy, repetitive chore, and makes the humor so drastically hit-or-miss I'm surprised it's (vaguely) themed around food and not darts.

Like an acquired taste, you have to really dig the tedious grind to justify investing in Snack World, although a more consistent style of humor would have greatly alleviated the shortcomings.

DISCLAIMER
This article is based on a free copy of a game/album provided to RPGFan by the publisher or PR firm. This relationship in no way influenced the author's opinion or score (if applicable). Learn more on our ethics & policies page. For information on our scoring systems, see our scoring systems overview.
Share This »