Thankfully, this small indie team has pulled together something truly special, marrying different gameplay styles to create a memorable and engaging experience. 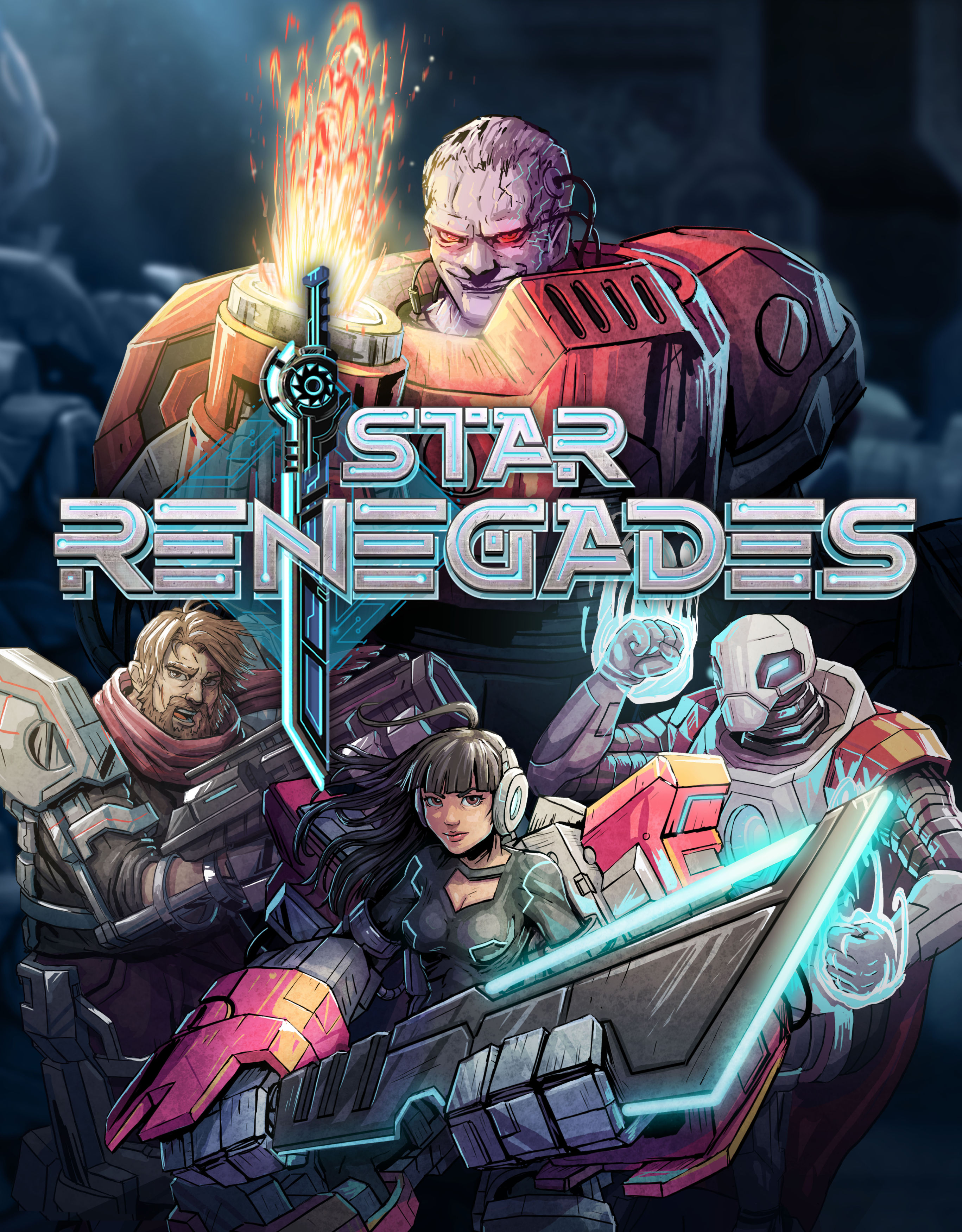 Raw Fury Games sure knows how to pick ’em! The publisher definitely has a type, cherry-picking intriguing indie titles with a flair for unique visual presentation. Ontario-based Massive Damage is no different, breaking into Raw Fury’s catalogue with the sci-fi adventure Star Renegades. The eye-catching strategy RPG roguelike has a lot going on, but definitely has the substance to support it.

Star Renegades places players in a distant future invaded by extradimensional beings called the Imperium, led by their mysterious supreme leader known only as MOTHER. The game chooses a show-don’t-tell method with the introductory story, using a beautifully animated in-engine sequence that hearkens back to the comic-style presentation in Phantasy Star, though it can be slightly tricky to follow along at times. Here you’re introduced to the cover art protagonist, Wynn Syphex, and her brother Davion; sole survivors of a daring assault against the Imperium’s capital ship. This leads you to a tutorial stage that gets most of the basics out of the way and leaves players with some heartache and a story spanning dimensions.

As the game starts in earnest you meet Professor Zurek upon finishing her greatest creation: an interdimensional travelling droid named J5T-1N, the key to halting the Imperium’s relentless assault. Armed with this new information, the Star Renegades of your dimension craft a plan. Beyond the inciting incident, there’s little to the story as you progress through the game. Character development is also sparse, taking place around the campfire with repeated text bits depending on characters’ relationships. Some map areas can be interacted with, giving a bit of insight into the world and how your party feels about it, but when you’ve heard the same joke about eating the giant magic mushrooms once, you’ve heard it before. Until players reach the inevitable final battle, don’t expect to be blown away by a thrilling space opera, and instead enjoy the ride as you smash through your foes to get there.

The play between dimensions justifies the roguelike mechanics of the game, as you return to the hub Star Renegade base between missions, win or lose. A mission starts off with a three-character squad at level 1 and you proceed as far as possible through three key planets the Imperium seeks to conquer and their main battleship. You are given three days to progress through each location before the level’s Behemoth arrives, powerful boss creatures that seek to harvest Titan Cores from their target planet. During those three days, you find each location is divided into smaller regions with randomly generated enemy squads and possible boons to be earned by wresting control from your foes. During each day, your droid companion J5T-1N has the ability to breach three barriers that bar entry into various regions.

This is where the strategy component comes into play, as players must carefully examine the randomly selected map and plan a path to maximize the benefits. After the breach ability has been exhausted, players must camp to progress to the next day. While camping, characters can exchange cards that offer temporary abilities for the next day and, more importantly, build up affection levels among party members. The higher the affection, the greater the reward as new passive abilities are unlocked and, eventually, powerful combo moves that can shift the tide in battle. With each new mission, you power up your squad by spending DNA on earning levels, finding new gear, and rebuilding relationships along the way. However, it’s worth noting that loot throughout your exploration is randomly generated, and thus variably helpful. Upon successfully defeating a Behemoth, you can spend earned gold with the local merchants for improved gear and add another member to your squad, with a maximum of 6 by mission’s end, if you make it there. Should you lose to them, though, they persist and get stronger, like in the “Nemesis System” from Middle-Earth: Shadow of Mordor, earning new strengths and abilities. You can review your foes by selecting the “Imperium” from the menu while on mission, which allows you to plan out the sorts of weapons and abilities that can best defeat these strong foes.

Whenever you return to the Star Renegade base, you expend earned Imperium credits and Intel to acquire some more permanent equipment and benefits, as well as new starting squad members. As well, Intel contributes to unlocking tiers that open up different character options for your squad, adding some nice flexibility to your subsequent playthroughs. You’re also free to wander into the cantina, a fairly direct homage to the Mos Eisley cantina music and all, to chat with different squad mates between missions. Once you’ve prepped yourself, you can head out on another run at any difficulty you have access to. Initially, the game offered a base normal setting, but Massive Damage have since introduced Easy, Harsh, and Extreme modes that comes with greater reward for the risk. Even on easy, Star Renegades poses a serious challenge further in, and the harder difficulties draw out the number of attempts to reach the final confrontation, so either way, expect to revisit your hub often. Still, regardless of difficulty, the true magic of the game comes from careful planning and manipulation of the combat system to achieve victory.

Star Renegades‘ combat system operates using initiative to manipulate action order. Each character class has a set of skills that create a myriad of effects which are further amplified by equipment. The number of possible effects is dizzying, but players can thankfully take their time to consider each option before executing a turn. You can also see what enemies plan and use the Inspect function to find out the exact consequences of their actions. This leads you to one of the most powerful mechanics in battle: delay. Most attacks cause varying degrees of delay, which pushes actions back along the initiative bar. Any action that happens before an enemy attack results in a critical hit with further effects, though be mindful that enemies also have this advantage. Additionally, if players manage to push an enemy action all the way off the initiative bar, they will Break, causing them to miss their turn. This system cannot be abused, however, as enemies can only be delayed a finite amount until they reset after hitting zero. The ebb and flow of this system is absolutely thrilling. Putting together an interesting squad and determining how best to break enemies or inflict crits is so satisfying! You’ll often feel like you’re barely scraping by against a Behemoth, but figure out the best use of defense and delay and squeak out a narrow victory with relish.

In addition to the basic abilities characters can use in battle, each attack doled out and bit of damage taken generates Fury. The Fury bar slowly fills and allows character to use powerful abilities and combos in battle, which is another key to victory. Star Renegades does an incredible job of making each of its myriad abilities and effects, even defending, a viable option for securing victory. And by its nature as a roguelike, combat can be repetitive, so there is a fast-forward function to zip through action execution. However, the game’s artistry will often leave you lost watching the action unfold.

Stunning spritework draws the eye to every part of this game. The backgrounds of each planet are beautifully constructed, so that their unique identities offer enough variety in the randomly selected maps for each playthrough to feel fresh. The character portraits of friend and foe alike are distinctive yet hint at inspiration from sci-fi pop culture, which makes them seem familiar in this newly created IP. This attention to design translates to the pixel-perfect execution of the sprites in combat as well, making it clear who is doing what in battle, despite a sometimes cluttered screen. The attacks are exciting and flashy, and as more abilities are unlocked, it gets easier to neglect the fast-forward option. Aside from some visual clutter in battle, your squad may get stuck on unclear obstacles on the map. Still, UI is crisp, clean, and easy to navigate, evoking the sci-fi vibe perfectly. The entire design team have done a brilliant job of making Star Renegades stand out visually, which is crucial given the repetitive nature of the game.

Musically, Stephen London’s soundtrack is simple, but effective. The music is good and feels like it offers some sufficient nods to existing sci-fi and RPGs, like the aforementioned cantina music loosely referencing Star Wars: A New Hope. Despite the quality of the compositions, the loops are somewhat short with a small amount of music, so the auditory journey can feel a little tired after multiple runs. While visually the game offers enough to shake up each revisit, you hear the same combat music for every encounter and the planet themes never change. The game’s sound design, however, adds to the visibly visceral combat, amplifying the action. Without the crunchy sound library making every laser blast and robotic deathcry count, it really wouldn’t be the same, so kudos to Orie Falconer for their work.

As eye-catching as Star Renegades is, there was a high risk it would be just another pretty face. Thankfully, this small indie team has pulled together something truly special, marrying different gameplay styles to create a memorable and engaging experience. The missions can definitely be punishing with serious setbacks, but you’ll likely have fun in spite of those defeats. The snappy, satisfying combat routine doesn’t grow stale, and the variety in map layouts, enemy formations, and loot ensures each playthrough will keep you on your toes. There’s nothing like pulling out a victory from seemingly inevitable defeat. Although there isn’t much to the story, what’s written is good, and the referential jokes are fun and quippy, and helps build an interesting universe to play in. Plus, you can pet the spacedog, so, what’s not to love? Star Renegades guarantees hours of fun, accomplishing gameplay, with a lot to unlock and explore. At game’s end, it’s likely that one victory won’t be enough, and you’ll find yourself diving back in to take on MOTHER and its Imperium hoards once more.

Sparse story, some clunky controls, more variety in music would be great.

A strong presentation belies a strong game that provides challenging, satisfying combat gameplay and strategy as you make your way across distant planets in an effort to save the dimensions.