[Suikoden 2 is] a game that is truly for fans of the original. 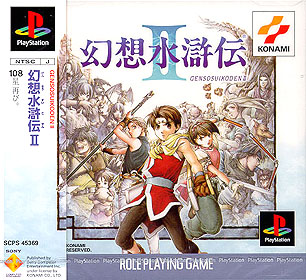 Suikoden was one of the first RPGs available for the PlayStation, released in 1996. The general consensus was that it was rather entertaining and perhaps the first decent RPG made available in North America. While it certainly had flaws, it developed a fan-base, and many clamored for a sequel. Several years later, in late 1999, Konami released Suikoden 2 in North America.

The sequel contains some flaws, but proves to be a worthy game, featuring the same style of gameplay that made the first so popular.

“But if it’s not found out, a lie becomes the truth.”

The game begins with the main character (who you name), and his friend, Jowy, encamped before finally setting out for home. Before the morning breaks, the hero and Jowy, both members of the Highland Youth Brigade, are attacked and forced to escape by jumping off a cliff into the water below. When the hero awakens the next morning, separated from his friend, he is found by two men, Viktor and Flik, who run a local mercenary fort. From there, the story chronicles the journey of the hero, who has been singled out by fate to become a great leader.

The plot runs somewhat similarly to the original Suikoden, with other parts that seem strongly influenced by another PlayStation RPG (which shall remain nameless, as knowing which game could shed too much light on Suikoden 2’s plot). In fact, many of the same elements are present – the 108 Stars of Destiny, the struggle between two armies, and so forth. It won’t win any prizes for originality – especially when compared to the original Suikoden – but it works well, with enough suprises along the way to keep things reasonably fresh.

As before, much of the game centers around the hero’s effort to gather the 108 Stars of Destiny – individuals who have been destined to play important roles in the war. Due to the fact that there are 108 characters to recruit – a task that is rather daunting – many of them get little character development. On the bright side, there are enough different characters that it’s easy to find a few that you like, which helps a lot – RPGs are a lot less fun to play when there aren’t any characters you like. Since Suikoden 2 takes place in the same world as the original, there are quite a few returning characters, which helps lend a sense of continuity to the events. As a bonus, if you have a saved game from the end of the original Suikoden, you can load that as you begin the sequel, which makes returning characters more powerful – and allows you to get a few secret characters as well.

The sound effects are good and varied. There are a variety of weapon sounds, from the hero’s twirling tonfa, to arrows, spears, axes, and so forth. Spells have distinctive sounds, from the roar of a fire spell to the crisp crackling of lightning bolts. There’s also a variety of different “sound sets” that you can obtain, which allow you to change menu sounds – it’s a novelty, but fun nonetheless.

The original Suikoden had an amazing soundtrack – wonderful compositions coupled with terrific use of the PlayStation’s sound capabilities. While Suikoden 2’s soundtrack falls short of the high standards set by its predecessor, it’s still one of the better soundtracks on the market. The number of available songs has nearly doubled, from two CDs worth to four CDs worth, even though some songs are repeated more often than in the original. There are a few recurring themes from the original game which have been slightly remixed and help promote that feeling of continuity – it’s another reward for those gamers who have played the first game. Overall, like the first game, one of Suikoden 2’s strongest points – if not the strongest – is the soundtrack.

Not much has changed, graphically, since the first game. There’s more detail present, but the overall style is the same. The towns and dungeons are well drawn, with a lot of variety between areas (though the forest areas look the same, the caves look similar, and so forth). The overworld is a bit lacking, and is rather barren of detail, but it suffices.

Battles are much more refined. They’re viewed from an isometric perspective, and there’s a lot of detail. Each character has a variety of animation depicting attacks, dodges, and special attacks. Enemies are also well animated, though there’s a bit of palette swapping going on. The spells are nice – there’s a lot of variety in the spell effects, and while some of the more powerful spells slow the PlayStation down, they look rather nice and convey their power.

Gameplay is divided into a number of different areas. The battles retain the same system as the original Suikoden. Six people can be in your party at once, grouped according to weapons range. The use of runes is the same as in the original – runes can bestow spells, offensive abilities, or miscellaneous abilities on characters – but characters can now equip multiple runes to add variety and balance. Runes can also be attached to each character’s weapon, bestowing offensive bonuses and abilities. To compensate for this, the game’s difficulty has been balanced. The original was a very easy game, but Suikoden 2 has a much higher level of difficulty. Enemies hit harder, and bosses frequently have multiple attacks per round, which makes survival a much more difficult proposition. Special combination attacks are also less effective. Despite this, most battles can still be won simply by using the game’s auto-battle feature to make all characters attack on their own. Battles go rather quickly, but there are a lot of them – the random encounter rate is rather high.

The large-scale army battles have been changed. Whereas in the original they were essentially games of paper-rock-scissors, Suikoden 2’s army battles are much more frequent, and use a map that is similar to the Shining Force games. It’s a nice change, but there are problems. First, battles are very hard to lose – unless you’re supposed to lose the battle, it’s very unlikely that you will. The other major problem is that there really is no strategy involved. Each unit has attack and defense ratings, which seem to have no impact whatsoever on the action. In the end, I simply had the computer control my army, which was just as entertaining as controlling the battle myself – and worked equally well. One-on-one duels also make their return, and are functionally the same. They’re a lot of fun, and it’s a shame that they aren’t more frequent.

As before, as you recruit more people for your army, your army’s castle becomes larger, and has more options open up. Traversing the castle is a lot quicker due to the negligible loading times, and the party can run now, which makes a huge difference. There’s a lot more variety in the castle this time, and Konami has fixed some of the problems of the original. Old favorites such as the armory and steam baths are back, and new castle features include a garden (to produce food which can be used for cooking), a magic scroll shop, and even a sculptor. One potential recruit gathers information on other characters, which can help you figure out where other possible recruits are, and what must be done to obtain them – it’s a much-preferred alternative to checking a FAQ for the information.

In the end, Suikoden 2 is a sequel that makes no pretenses about what it is – more of the same. Konami took the gameplay and basic concepts of the original, made a few changes here and there, and came up with Suikoden 2. It’s a game that is truly for fans of the original.

If you enjoyed Suikoden but haven’t yet bought Suikoden 2, then by all means go and pick up Suikoden 2 – it’s familiar, yet still entertaining. If you didn’t like the original Suikoden, then you won’t enjoy the sequel. And if you never played the original, I highly recommend you pick that up first and play through it. You can play Suikoden 2 without knowledge of the original, but remembering events and recognizing faces from the original game adds something to the playing experience.

Suikoden 2 is a fun game. It’s certainly not the greatest or most original RPG on the market, and it’s certainly got flaws. As a fan of the original Suikoden, however, I enjoyed most of the changes they made, and I’m glad that I picked it up.