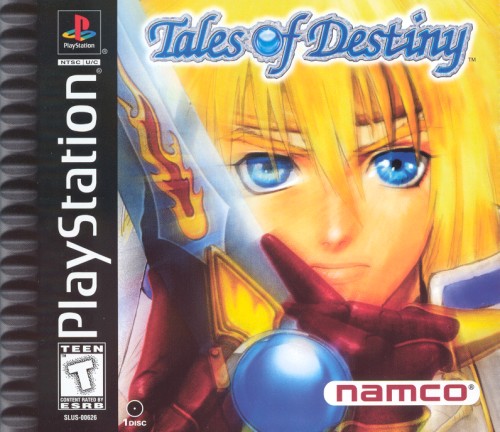 Although gamers may come in with no inflated expectations of the game, Tales of Destiny sets some high expectations for itself that it can’t follow up. As soon as you pop the disc in and turn on the PlayStation, you are treated to a beautifully well drawn and smoothly animated anime cut scene depicting the main characters of the game in action. The beautiful graphics of the cut scene are accompanied by a brilliantly written (musically, if not lyrically) J-pop style vocal song as well.

Unfortunately, reality (and mediocrity) sets in as you reach the title screen, where the graphics and sound quality are noticeably inferior to that of the introduction. After the initial letdown, the game’s opening play sequence (aboard the Flying Dragon airship) recaptured my interest. However, after that, the game got fairly boring (another letdown) for the next ten hours. This kind of up and down pattern continued throughout the game, which mildly frustrated me.

The in-game graphics are a mixed bag. The game is basically divided into three distinct graphical sections: the area map, the battle scene, and the world map. The area maps (such as dungeons, towns, etc…) are beautifully hand-drawn 2-D graphics, using a plethora of colors and incorporating some nice parallax scrolling in some areas. These were very nice to look at throughout the game. The battle scene graphics, however, weren’t quite as nice. Your characters and enemies are drawn with a reasonable amount of detail, albeit in a massively superdeformed style, but the backgrounds in the battle scenes were much less interesting to look at than the area map backgrounds. Finally, the world map looks simply horrible. This blocky, pseudo-3D monstrosity also seemed to contain very few colors as well, especially for a 32-bit game.

Control, however, is an another matter entirely. The battles in this game play almost like an action RPG (more on this later), and the controls are very responsive throughout the battles once you learn them. They are great as well in the area map. A welcome change from the recent trend of RPGs is that when you walk at normal speed, your characters move at a decent clip. And for the especially impatient, there is a dash button as well, which makes your character go so fast that you lose a fair amount of precision in control, since unfortunately your character can only move in 4 directions (instead of the standard 8). However, control precision does also slip up a bit in, you guessed it, the world map.

Sound effects in this game are also well done. Standard stuff like swords hitting shields, enemies, etc. are nothing to write home about, but when your characters take damage in battle, they let loose realistic cries of pain (provided by various well-known seiyuu). Quite impressive.

In some parts of the game, there is voice acting by said seiyuu as well. The cast is first rate, and the quality of the voice acting represents the talent of the cast quite well. Unfortunately, moments of voice acting consisting of more than battle cries or a two-word post-battle celebration are few and far between.

The music is pretty good in this game as well. Most of it is much more rock-based than your typical RPG soundtrack, and the composition of a fair amount of the tunes is excellent. My only complaint about the music is that, with the exception of a few truly brilliant rock tunes, the bludgeoning rock beat of many of the songs completely removes any amount of subtlety that they might have otherwise had.

The plot of the game revolves around Swordians, which are sentient swords that can talk and supposedly only can be used by the forces of good against the forces of evil. The storyline is pretty pedestrian, and there isn’t a whole lot of character development either. One good thing, however, is that there are a lot of jokes in the dialogue throughout the game.

Despite all of my gripes in various facets of the game, I did enjoy Tales of Destiny because of its innovative gameplay. The majority of the characters in your party can wield a Swordian, and the Swordian gains experience points as the character wielding it does. Each Swordian is based on a particular element (earth, fire, water, air, or thunder) so the person wielding that Swordian can cast spells based on that element. In addition, each Swordian has a slot in which you can place one of the many various CDs (called discs in the game) that you find during the game. These CDs have a multitude of functions, depending on which ones you find. Some give you statistical bonuses, while others let you cast spells of a certain element. Since only 1 CD fits in a Swordian at a time, you get to choose which one works best for certain characters and situations. Kind of like the materia system in Final Fantasy VII, but with a twist.

The battle scenes are also unique. The viewpoint during battles is directly from the side, much like Dracula X: Nocturne in the Moonlight, and the battles are in real time. You use the D-pad to move your lead character around to avoid enemy attacks, and you can also use it to move him into position to time his attacks better. In addition, special attacks (techniques) can be assigned to a 2 button combination and then executed in battle. The techniques are very effective and fun to use. My only gripe about the battle system is that you don’t have direct control over your other party members, though the AI on them is pretty good and you can assign certain attack and defense tendencies to them.

The game also keeps your attention by letting you engage in various side quests and mini games, such as cooking, playing tag, and a whole bunch of others. Doing well in these mini games usually results in the acquisition of valuable items. However, in spite of all this, Tales of Destiny still tends to alternate between periods of enjoyment and periods of sheer boredom during its quest.

I reviewed the import version of Tales of Destiny, but a US version is slated for release sometime in August. This is a solid RPG to tide you over until the next wave of great RPGs (Kartia, Xenogears, Lunar) hits the US, but it’s certainly nothing to hold your breath for.