The Falconeer is one pretty bird. The spectrum of reddish and purple colors in a sunset's reflection off the water is just about as breathtaking as sitting on the beach and watching one in real life, but without the eye damage. 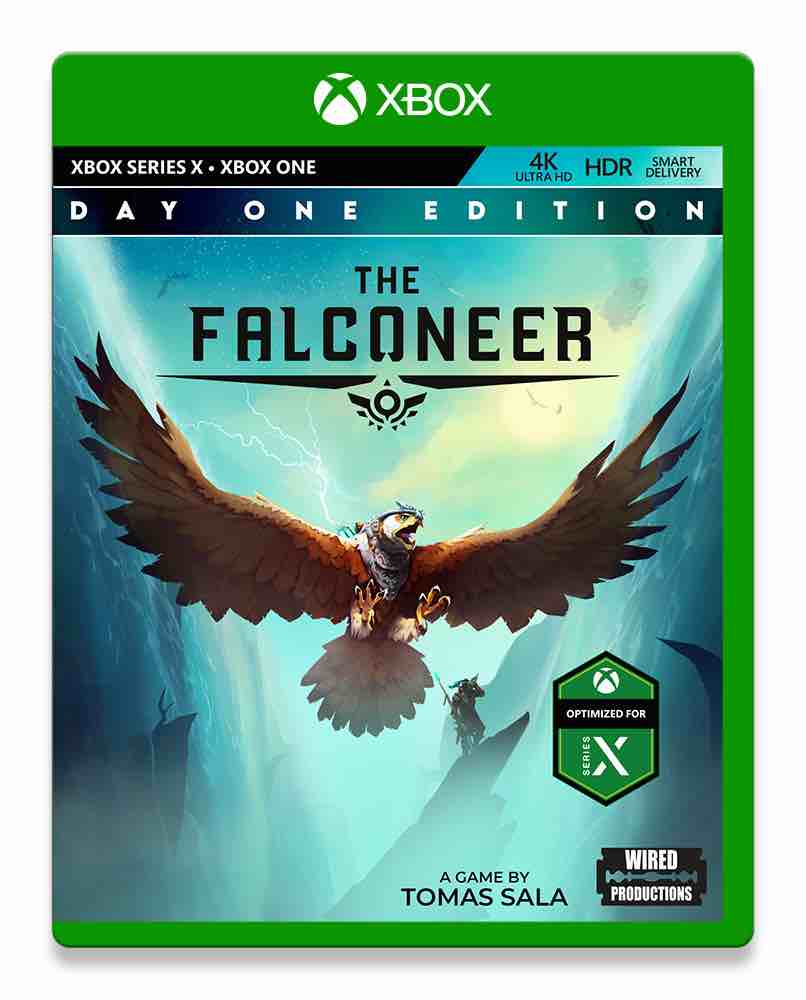 The Falconeer is an air combat game in the vein of Ace Combat — with simpler gameplay. Instead of the typical fighter jet, the player’s character is riding atop a big ol’ bird. Players take off from home base, fly to nav points, engage in dogfighting-style combat, then head back to base to earn some splinters (the world’s currency) and repeat the process.

The player character pilots around the Great Ursee, a world covered by a vast ocean, with inhabitants who make their homes clinging to the small rock formations jutting out of the water. It’s basically Waterworld.

The steam-powered vehicles around, like blimps and water-based ships, evoke an airpunk style, as do various piloted flying animal species, like insects and weavers — the Ursee’s wyvern-like species. And it’s a sight to behold on the occasions that the enormous, aptly named, city-sized crabton surfaces from the deep.

In each of the campaign’s four chapters, you work as a bird for hire for a different faction, each attempting to hatch their most dastardly, birdbrained schemes in order to claw their way to the top of the pecking order, like Game of Thrones with feathers.

There are also several stops at magnificently rendered sacred locations during missions (such as a raging volcano), with tidbits of mythology at each and small, esoteric pieces to the puzzle of this beautiful yet dangerous world.

The Falconeer is one pretty bird. The spectrum of reddish and purple colors in a sunset’s reflection off the water is just about as breathtaking as sitting on the beach and watching one in real life, but without the eye damage. The dual moons of night are equally gorgeous, as is the shift to that green sea color before a storm rolls in. And the physics-defying Maw, which I can only describe as a “water valley,” is as majestic as it is terrifying.

In an unusual twist, thunderstorms are your friend, as you recharge your limited ammo supply when your bird gets zapped by lightning. The dynamic weather system also features shifting air currents, which give your bird a speed boost. And when the dark clouds roll in, it sets the perfect dark and menacing mood for raining bombs on your enemies.

Gameplay entails taking on mandatory story missions and side missions, which seem to be procedurally generated. Or, if you wish, you’re free as a bird to fly about the world in search of your own adventures.

Early on, missions are simple: Go here, shoot down some enemies, go home. But they become progressively more varied, with new details; you might have to retrieve or deliver items, escort important people on their ships, and sometimes you’re ordered to fly the coop away from the enemies to safety.

The most exciting missions are the assaults — frenetic, action-packed affairs where the player bombards an enemy base with animals flying everywhere and ships galore from both your own side and the enemy’s filling the skies. Projectiles fill the air for pilots to dodge and dive away from, and there is no shortage of targets that need blowing up.

Swooping across a crowded combat zone feels effortless, thanks to the excellent responsive controls. Making a flight-combat game that feels this smooth on a standard controller is an achievement all its own.

You can purchase better guns and different types of ammo from merchants scattered across the ocean world. The varieties of ammo have different effects. Generally, the more expensive types do more damage, but the special effects they provide feel minimal.

Doing more damage is vital, so upgrading your weapon periodically is absolutely necessary as you advance. If you’re not careful about how you spend your splinters, you’ll find yourself out on a wing and a prayer.

You can also complete races, i.e., time trials, to obtain the right to trade in your bird for a stronger, faster model, and as with the guns, acquiring a better falcon becomes a necessity as the game goes on. The best birds handle like a dream, and flying them takes full advantage of the sharp controls.

Unfortunately, a lack of balance becomes a major issue at times. One mission, you’ll blast your foes out of the sky with a shot or two; the next, you won’t even be able to scratch their hide, and you’ll be the one getting your feathers plucked after taking just a few hits. Thus, there will be times where grinding through the side quests becomes a necessity, which can be a chore because the difficulty spikes inhibit those too.

In games that encourage exploration, the danger of dying can create a sense of adventure in a positive way. The problem in this game is when the player goes down for that big swan dive into the drink, they are punished by losing a fraction of their splinters, which deflates the enthusiasm for exploration. The Falconeer is autosave only, so players have to earn those splinters back on their own, extending the amount of grinding needed if they die too many times.

There is some satisfaction in getting a new gun and being able to take down enemies with ease once again, but the payoff doesn’t justify the monotony of some of the more mindless side missions.

Quality of life amenities are much welcome in The Falconeer. If no enemies are floating between you and your next destination, you have the option to skip travel, and unless you’re in combat, you can always instantly fly away home. Accessing the map also allows for quick travel, but your inability to mark spots on the map is disappointing for times when you’re not working on a mission and want to explore a specific spot.

The sounds of thunder and explosions draw the player in during major battles. Background music ranges from solid to very good: it’s your standard fantasy fare, though sometimes it takes on a nautical feel with liberal use of the didgeridoo. Voiceovers are serviceable yet unremarkable.

Other aspects of the presentation feel awkward or even incomplete. For instance, you get a fresh, unsoiled character at the beginning of each chapter. It feels odd, and it breaks the feeling of continuity. You also begin chapters with a new bird, yet you keep your splinters and most of your items. It severs the player’s immersion in the world, and it’s confusing.

Things get pretty dark in the Ursee, and not just during the storms. One way to improve your bird is by injecting them with mutagens. You shoot these chemicals into your warbird, which, according to their descriptions, have adverse effects, which sometimes are permanent. One variety of mutagen causes the falcon to waste in order to boost their speed. Back here on planet Earth, this sort of behavior would be labeled animal cruelty, surely getting PETA’s feathers all ruffled.

On occasion, you’re ordered to commit world-altering acts, like desperate acts of religious zealotry or even full-on atrocities.

There are lots of bizarre moments like these that will shock players out of their gamer stasis, and it led me to question, “Are we the baddies?”

But it’s the mass murder you commit along the way — typically punctuating each chapter with a triple exclamation point — that gives the narrative its wings. The game doesn’t revel in its inhumanity, but it does make the player question their own faction’s morality, especially in the face of the player’s own inability to question or disobey orders.

It’s a good thing when art forces its audience to sit and think about the bad things they’ve done.

But early on, with the moral deficiency in the factions’ leadership and the player’s shifting perspective, the story feels disjointed and uninviting, though the revelations dropped on you in the game’s final act do offer illumination and enlightenment.

The fourth chapter is when The Falconeer is at its most vibrant and dynamic across the board, from gameplay to narrative, making it backloaded. Were the more gameplay-heavy first three chapters consistently more enjoyable before the ramped-up narrative in the final one, it could have been an instant classic. Sadly, that’s not the case.

The Falconeer absolutely has its high points, and all of the elements of a great game are there. It’s just disappointing that they don’t gel enough to be wholly satisfying. Visually, the game is stunning, without caveat. The combat can be exhilarating … at its best. The story can be interesting, even fascinating … sometimes. The game’s heights are extreme, but so are its lulls.

Trying to make a recommendation for interested players drives me out of my falcon mind.

But I also could stare at those sunsets for hours.

“This review was updated on December 24, 2020 with details of the Kraken DLC.”

The weather and water are gorgeous to look at, combat is exhilarating when at its best.

Getting killed hurts more than it should, the story fails to engage between major events.

The Falconeer draws you in with its visuals and gameplay, but the lulls between the game's best moments are too vast.