The Legend of Zelda: A Link to the Past 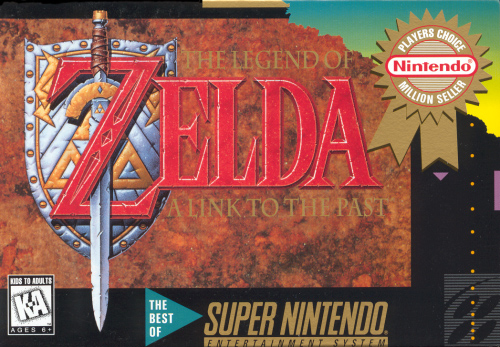 Legend of Zelda: A Link to the Past, sometimes called Zelda 3, was the third game in Nintendo’s famed Zelda series. Like the other games in the series, Zelda 3 is an adventure game.

Before the game begins, there is a prologue story. Long ago, a criminal from the largest desert in Hyrule found his way to the Golden Land. Legends said that inside the golden land was an artifact containing the power of the gods, and that the first person to find it would be able to wield that power for himself. One day, long after the criminal had entered the Golden Land, monsters and evil energies started entering Hyrule through the portal to the Golden Land. At this time, it became apparent that someone with an evil heart found the power of the gods and was using it to destroy Hyrule. This invasion was stopped by the combined efforts of the knights and sages. The knights fought off the invading monsters, while protecting the 7 sages, who used their combined powers to seal the portal to the Golden Land. With the evil one sealed in another dimension, life was good. Or was it?

During the time the portal was open, evil magic infected the kingdom of Hyrule. Monsters, natural disasters, and diseases plagued the kingdom. Then, one fateful day, a wizard calling himself Agahnim stepped in and ended the disasters with his magic. Seeing the man’s power, which clearly rivaled that of anyone in Hyrule, the King appointed Agahnim as a chancellor. In the months that followed, rumors began to fly. Some said that Agahnim secretly became the new king. Others say that with every passing month there is another missing person, and that all of them were women whose ancestors were the 7 sages. Still other rumors claimed that Agahnim has been conducting secret magical experiments at the peak of Hyrule Castle’s highest tower.

When the game begins, Link wakes up in the middle of the night, hearing telepathic messages. He is hearing a plea for help from Zelda, who is in the castle prison. He also hears “the other kidnapped girls are gone, and now only I remain”. As Link wakes, with intent to track down this distress signal, his uncle tells him to stay in bed and leaves, carrying a sword and shield. Since the messages persisted, Link decided to disobey his uncle. By doing that, Link had just got himself into something he could’t have possibly expected.

The gameplay of Zelda 3 is a 2-D, bird’s eye view style adventure game. As with many 2-D adventures, screens can have a concept of height and mutiple altitude levels. Puzzles are commonplace in Zelda 3, and solutions can involve lighting torches, pushing statues and blocks, touching switches, and killing all the monsters in the room. Some puzzles require a little thinking, but none are excessively difficult. In almost all cases, exploring and experimenting with different items is the best way to solve anything. Enemies are everywhere, and they range from weak, 1-shot insects to dangerous creatures that attack with bombs and fire. There are many boss enemies throughout the game, usually loacted at the ends of dungeons.

As with other Zelda games, Link grows steadily more powerful as the game progresses. Each completed dungeon yields a new item and another heart for the life gauge. In addition to better attack and defense levels, Link will find a wide repitoire of weapons, including a bow, a hookshot, and a boomerang, as well as magic attacks such as fire and ice rods, magic powder, and an earthquake attack. There are also items that give Link the ability to swim, dash, and lift heavy boulders.

Zelda 3 has some very good music in certain areas. There are a few different songs for dungeons, all of which are very fitting. The main map and town songs are also pretty good. The boss and cave musics are decent, but they could have been better.

Zelda 3’s controls are designed very well. The ‘B’ button attacks with the sword, and is used most often. The ‘Y’ button uses all other weapons and spells. The weapon or spell for the ‘Y’ button is selectable on a subscreen. The ‘X’ button brings up the map screen, and the ‘A’ button performs most other actions such as dash attacks, talking to people, searching, and picking up objects. One way the control could have been improved was having the ‘L’ and ‘R’ buttons switch between the selected item for the ‘Y’ button.

Zelda 3 effectively combines exploratation, monster fighting, and puzzle solving with an interesting fantasy world. The fun of Zelda 3 lies in searching high and low for new places and items, and learning all about the culture and history of Hyrule while becoming a part of it. It’s also full of surprises, especially if you try playing it in a few different ways (ex. passing up certain items/hearts, clearing the dungeons out of order). Zelda 3 delievrs an excellent experience in the classic 2-D style adventure. New copies of Zelda 3 are still available in many areas, since Nintendo re-issued the game several times. If you don’t own this game, consider buying it; it’s well worth your $20-$30 for a new copy.