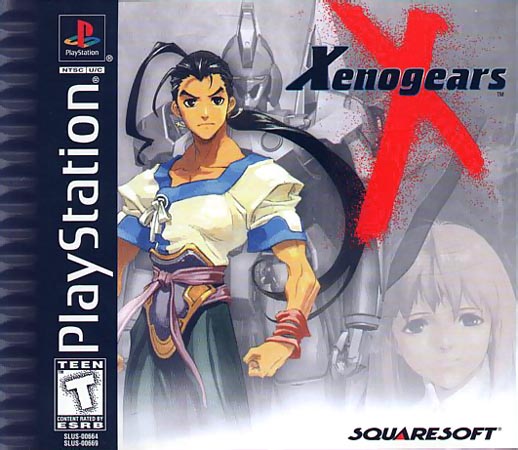 The history of Xenogears is an interesting one. The game was originally announced, then it was decided that it would not be translated due to religious controversy. Gamers all over flocked to sign petitions supporting the game, and whether or not the petitions were the reason, it was announced that Xenogears would be translated and brought to the US.

When Parasite Eve was released, everyone promptly put the demo disc in, and watched the CG splendor of the FFVIII movie – and then a few people decided to try out the Xenogears demo. The demo included about an hour’s worth of gameplay (a little more or less, depending on the amount of exploration done by the gamer), a preview of several characters, and a chance to try out the heralded new battle system. Most people seemed to agree that Xenogears would be worth it.

While overshadowed somewhat by the release of Metal Gear Solid, Xenogears was released in October, and it was soon common opinion by most that the game was well worth the money.

If you’re looking for a review that contradicts that opinion, look elsewhere.

The game begins with a wonderful anime intro that sets the futuristic tone of the game, and is a joy to watch. The initial events portrayed in the movie are not actually explained until late in the game, and by the time that the player has discovered the truth, most will have forgotten what exactly happened – but it all comes back.

In fact, for the first few hours of the game, nothing of significance really happens. Fei Fong Wong, the hero of the game, is living in the small village of Lahan – a tranquil, peaceful existence. Like many RPG heroes, he suffers from some amnesia, and nobody is able to adequately explain his past.

Lahan is a wonderful introduction to the game – there are a great many secrets in the area, it gives you a chance to get a feel for the controls and the engine, and it is just a joy to behold.

Suffice to say, that tranquil atmosphere does not last for long.

The first thing that you may notice about the game is that the graphics aren’t the most stunning around. To some, they may appear ugly. The game has a distinctive style, though, and most won’t have reason to complain. The battle sequences differ in style – the normal fights are all sprite-based, and allow some very smooth, detailed animation for fighting techniques. The Gear battles are polygonal, and the amount of detail is quite high. The game is actually a very well done mesh between sprites and polygons.

Gameplay is typical in some respects, abnormal in others. Like most RPGs, you’ll have control of your characters on a grand overworld and in various locales, and they respond well. There were a few cases where my characters didn’t want to respond to my commands to jump when I was pressing against an object, but such incidents are rare.

The battle system is innovative and serves its purpose well. The fighting system has been explained in a multitude of sources already. The player is free to chain 3 levels of attacks together to use “Deathblows”, which are powerful (and visually appealing) attacks. Deathblows are designed in a way that prevents them from being too powerful early on – while you can use them every turn, and save up Attack Points to chain combos of Deathblows, you must first practice and learn the Deathblows, most of which cannot be learned until certain levels.

Gear Battles are similar, with fuel being used instead of Attack Points. The status of your characters actually has very little to do with your power in your Gears – rather than the Gears becoming more powerful as your characters do, the strength of your Gears is dependant on the parts (Engine, Frame, Armor, etc) you have installed on your Gears. The unfortunate side effect of this system is that ultimately, your character progress means little, so long as your gears are top-of-the-line.

Equipment is handled slightly differently than in other games. Not all characters have weapons, but for those who do, you’ll see the typical RPG variety (rods, swords, guns, and whips). Armor and accessories are not handled separately, however – every piece of equipment falls into the blanket category of “Accessories”, and your characters (and Gears) each have three slots – you can choose to equip several pieces of armor for high defense, or several status protecting items, or a combination of the two. While it may seem a bit disconcerting at first to not have the separation of armor and effects, the customization available is quite nice. Gears also have three slots, and you’ll find some correlation between human and Gear equipment.

With the emphasis on hand-to-hand combat, magic is given a back seat, however. Most characters have few attack magic abilities, but healing magic is common (and quite powerful). For those people who prefer to use magic, it’s a viable option, but is generally not as cost-effective as using Deathblows (and once characters begin to learn upper-level Deathblows, magic is almost useless). It’s a bit of a departure to see your magic-user pull off a combination of physical blows that does more damage than magic. One thing I would like to see in the future would be a more robust magical system.

As always, Square has included a variety of minigames. The most notable is probably “Battling”, which can best be described as a fighting game. It’s basically real-time Gear combat in a battling arena. A two-player option is available, and Battling Points can be earned and saved up for good items. There’s also a card game that requires you to run around on giant cards – it requires speed, reflexes, and quite a bit of luck. There’s a few other little mini-games, and they generally serve to enhance the game.

Length has been a justifiable concern in games recently, as companies are notorious for overstating the length of their games. Rest assured, however, Xenogears will keep you busy for quite a while. Virtually all estimates I’ve heard so far have people finishing the game their first time anywhere from 50 to 80 hours, and the game is not dragged on unnecessarily. (As a note, it took me a little over sixty-nine hours to complete it)

The sound effects are about what you would expect from Square, which is to say that they are quite good. Music, however, is in a category of its own. The inevitable comparisons to Chrono Trigger’s music are justified, as the style is similar, as are a few melodies – this is to be expected, considering they had the same composer. Xenogears comes into its own, however, with some incredible musical pieces, particularly the emotional pieces. Fortunately, Square put a musical test in the game (which requires some work to activate), so you don’t have to order the soundtrack – although it is definitely a must-buy. The singing is also quite beautiful in the ending credits, which can be hard to find.

Also of note is the voice acting. While not up to the standard of, say, Metal Gear Solid, the few times you hear the characters speak will not be unpleasant. Overall, the characters sounded like I would have expected them to. It’s a shame that the dubbing job on the anime was off so much – it was a bit of a distraction watching the characters’ mouths move for about two seconds after they stopped talking.

The story is excellent, and is easily one of the best RPG plots I have seen in a long time. As the game progresses, you will find out more about what is happening, more of the character backgrounds, and even more plot threads will open up. I suppose the best measure of how well a story is done is how anxious the gamer is to find out more, and I found myself playing the game for longer and longer stretches the farther into the game I got. The overall story is excellent, especially the love story within the framework of the plot. Also of note is the way that foreshadowing is used excellently, and connections will be made throughout the game that tie everything together.

The character development is a mixed bag. Four of your characters are very well developed, and experience character growth up until the finale. The rest of your characters have their moments of development (generally soon after they join the party), but ultimately are relegated to background status. The villains are also generally well developed. Like Sephiroth of FFVII, you may find yourself sympathizing with a few of the villains as you come to learn their true motives and feelings.

Disc 1 is rather straightforward in the RPG story aspect – the characters travel, learn things, events happen, and they react to them. Disc 2, however, is a drastic departure from the norm. Rather than experiencing all the plot events first-hand, the brunt of the story on the second disc is narrated by three of the characters – testimony, if you will. The impact of this is rather straightforward – as the plot reaches its most complex levels, and the player is drawn in by the story, the plot keeps on coming. Rather than have the player traverse through more dungeons to lengthen the game, they deliver the plot and let you see for yourself what is happening. That’s not to say that you do nothing in Disc 2 – quite far from it. However, rather than having the characters see the events and try to interpret them as the player watches, the plot is told from the perspective of several characters who know what is happening – if you will, rather than having the plot just spit out, it is also analyzed and explained for the player. It’s debatable if it was the right choice, but it is certainly a departure from the norm, and quite entertaining.

The controversy over religion seems to be rather unfounded. While the plotline heavily centers on religion as it progresses, it remains non-offensive. Comparisons can certainly be drawn between modern religions and the religious system in Xenogears, but the tone remains such that it is not likely that anyone would be offended (your mileage may vary).

There are a few flaws with Xenogears, minor as they may be. I frequently found myself wishing that there was a text speed option – some characters are rather longwinded, and there’s no real point to what they’re saying. The difficulty is rather unbalanced – the majority of the game is quite simple, but there are a few bosses that may be too difficult for some. It is actually very difficult to die in most circumstances – items that heal completely are abundant and cheap. Also, a great many status effects and attack types (in Gears – Sonic and Gel attacks, for example) are extremely rare – and under-utilized. A few other minor flaws have already been covered in this review.

Overall, however, it is difficult to penalize Xenogears for such minor oversights. It is certainly one of the best RPGs of 1998, one of the better console RPGs ever, and well worth your money.