Yakuza 6: The Song of Life

What would a Yakuza game be without a truly spectacular number of substories and side activities? 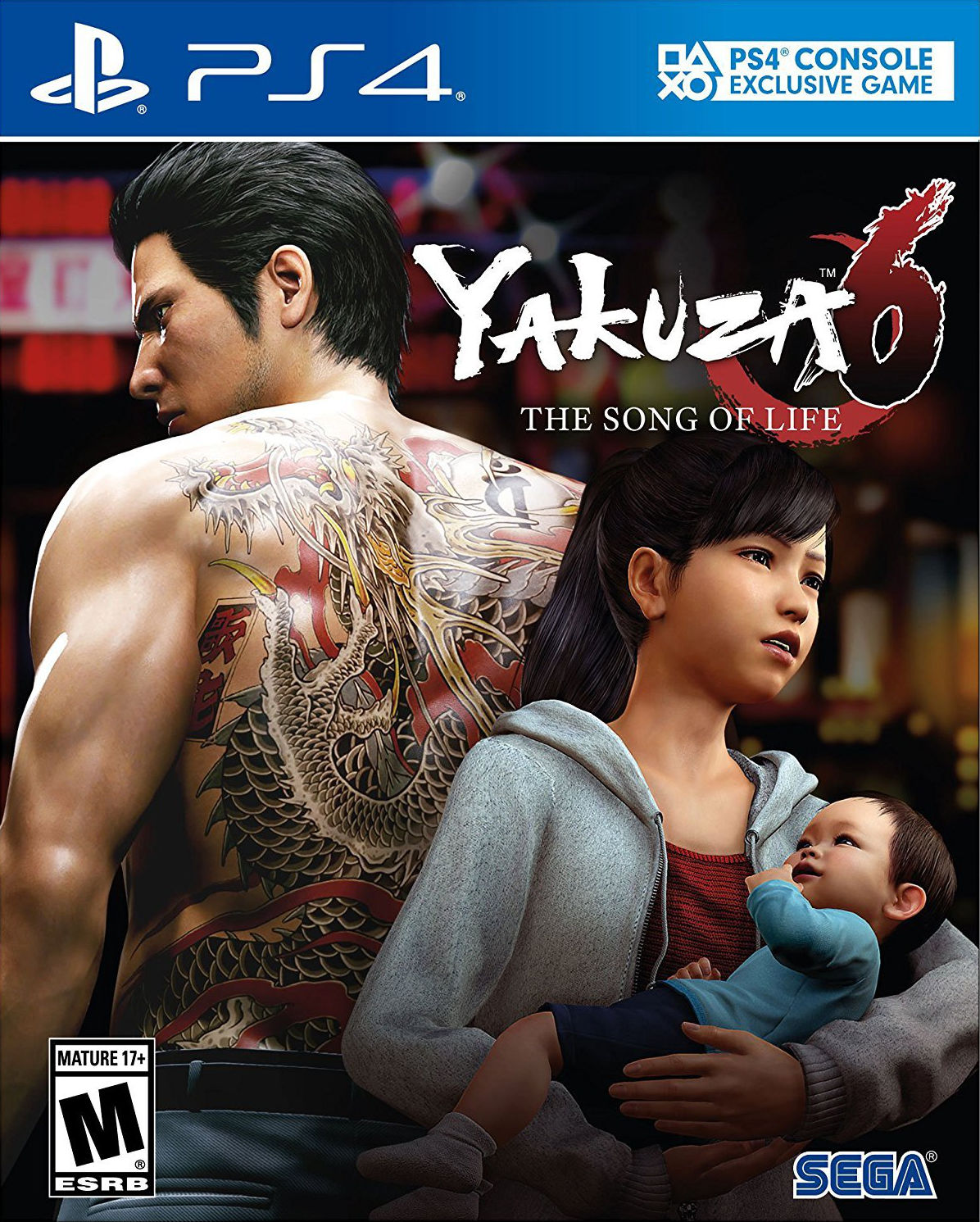 The Yakuza series started over 15 years ago on the PlayStation, and since then, Kazuma Kiryu has been put through the wringer more than just about any video game protagonist on the planet. Over the course of six games, he lost more than anyone could bear: his best friend, his love, his father figure, his orphanage, and his freedom. Sure, he’s gained countless UFO Catcher prizes, but that’s no substitute. Despite everything, Kiryu always fought on for those he loved. But in Yakuza 6: The Song of Life, his story is finally coming to a close.

The Tojo Clan is in crisis! Due to sweeping new Yakuza laws, the sixth chairman and all his lieutenants were arrested, leaving a power vacuum that every other organization in Kamurocho looks to fill. Meanwhile, after his own three-year stint in jail, Dragon of Dojima Kazuma Kiryu discovers his adopted daughter Haruka has gone missing. Returning to Kamurocho, Kiryu finds himself once again pulled into a Yakuza conspiracy: one that Haruka and a mysterious one-year-old baby are at the center of. With the baby in tow, Kiryu embarks on a journey to discover what happened to Haruka since her disappearance, but the answers he will find may end up reshaping the future of the Tojo Clan forever.

Despite being the ending of the Kiryu saga, Yakuza 6 offers a new start for the series in the form of the Dragon Engine. This new game engine finally brings the world of Yakuza into the modern realm of open-world games. For the first time in the series, Kamurocho no longer feels like a vaguely lifeless movie set. You can now enter buildings seamlessly without hitting a loading screen. Storefronts are full of people who no longer look like rejects from Virtua Fighter 2. Though some areas of Kamurocho are unavailable due to a lack of development time, it feels more expansive and alive than ever. The addition of a new location, Onomichi Jingaicho in Hiroshima, is also wonderful and reminds me a bit of the small-town feel of Ryukyu, Okinawa in Yakuza 3.

Unfortunately, Yakuza 6 suffers from some significant story problems that hurt my enjoyment of the overall game. While I don’t want to be the kind of person to pass judgment on fictional characters, I will say that everyone from Kiryu to Haruka and Akiyama makes some spectacularly poor life choices in Yakuza 6. While it works out in the case of Akiyama (he would be just as comfortable living in a sewer as he would be in a penthouse), other characters don’t fare as well. Haruka, in particular, has gone from being a fantastic protagonist in Yakuza 5 to being bedridden in a coma for the vast majority of the game. I hoped that her character had progressed past being temporarily fridged to motivate Kiryu, but sadly, we don’t get to see much of the incredible character she became in the previous game.

But don’t worry, because we now have an entirely new small child for Kiryu to worry about: a mysterious baby named Haruto. I’ve never been a big fan of the Yakuza Dad segments in the series, and this new “Yakuza Grandad” dynamic is no different. The minigame where you spend a few minutes calming the baby may be realistic, but it turns out that taking care of a fussy one-year-old doesn’t make for engaging gameplay. Thankfully, Kiryu finds appropriate babysitters early in the game, and soon after, the baby becomes little more than a MacGuffin.

The massive upgrade in graphical fidelity also includes a completely new combat engine. I must admit this is the only part of Yakuza 6’s gameplay that I feel is a downgrade from previous entries in the series. Rather than multiple combat styles you can switch to on the fly, you have one based on Kiryu’s legendary Dragon Style. The combat feels much less fast-paced than other entries, offering fewer options to the player. The addition of ragdoll physics is also a point of controversy, as fights feel less “real” when enemies literally go flying 50 feet into the air after being hit by a bicycle. Upgrading all of your skills requires you to pull from several experience types that include strength, agility, spirit, technique, and charm. You earn these experience points in different ways. If you want strength points, roaming the streets looking for fights might be how you perfect that skill. If you want to build up your charm points, you might want to hit up some minigames.

Speaking of minigames, what would a Yakuza game be without a truly spectacular number of substories and side activities? While it doesn’t quite match Yakuza 5 in sheer variety, Yakuza 6: The Song of Life includes some exceptionally enjoyable ways to ignore the critical path entirely. These include the usual pastimes of karaoke, darts, classic Sega arcade games, and visits to cabaret clubs, but there are new activities that offer hours’ worth of gameplay. If you’re a cat lover, you can search Kamurocho and Onomichi Jingaicho for strays to send to a cat cafe. Want to go fishing? You now get an underwater, on-rail shooter where you fight sharks and giant squids! There are a few… awkward activities, such as the Cam Girl Live Chat minigame, but they’re overshadowed by the sheer amount of excellent side content.

The largest side activity in Yakuza 6 can almost count as its own game: the Clan Creator. Here, rather than fighting battles one-on-one, you enter into a simple real-time strategy/tower-defense game utilizing recruits you’ve met in substories to fight large-scale battles with rival gangs. I had a lot of fun with the Clan Creator because of the collectible aspect of recruiting fighters rather than the gameplay. It’s super fun to obtain some of Yakuza’s most famous faces, such as fan-favorite Majima or RC-car enthusiast Pocket Circuit Fighter, to send into battle. If you enjoy tower defense, this might be a highlight for you.

As a conclusion to Kiryu’s story, The Song of Life hit a few sour notes for me. However, as an installment of the Yakuza series, Yakuza 6 reaches new heights. The upgrade to the Dragon Engine set the stage for triumphs yet to come (including Yakuza Kiwami 2, Judgment, and Yakuza: Like a Dragon), and the game is an overall joy to play. It may be bittersweet to be leaving the Dragon of Dojima’s shoes, but I have no doubts that there will be several return journeys to the streets of Kamurocho in the future!

Kamurocho feels more alive than ever, a massive amount of side content, characters models look fantastic.

Yakuza 6: The Song of Life is a fine entry of the Yakuza series, but a poor way to end the story of Kazuma Kiryu.