When you're comfortable with the action in Ys IX, it's fun, fast, and furious, which makes the rest of the game feel average in comparison. 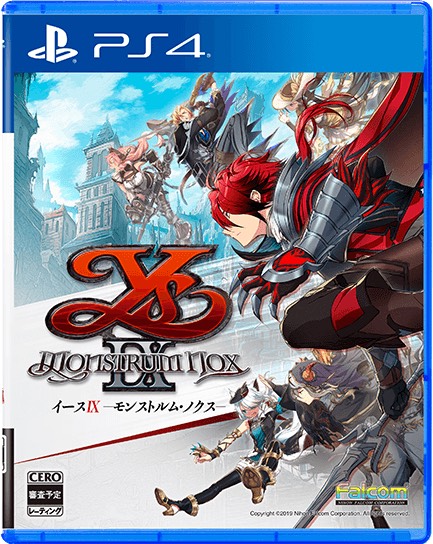 Falcom’s Ys series is the tale of Adol Christin, an adventurer whose exploits see him regularly clashing with monsters, gods, and the Romun Empire (not a misspelling) in a fictitious analog of the post-Classical real world. Each Ys title is a different chapter in Adol the Red’s travelogue, which usually involves the copper-coiffed hero visiting a new land, exploring ancient ruins, and defeating an ancient evil. Ys IX: Monstrum Nox is another one of those, but this time Adol becomes a transforming vigilante with mysterious superpowers. Maybe an explanation is in order?

Adol and his partner-in-adventure Dogi arrive in the walled city of Balduq in the nation of Gllia (also not a misspelling) with innocent intentions, but Adol is immediately jailed under suspicion of criminal activity by the Romun garrison in power. Balduq’s prison is a massive structure that’s centuries old and holds many secrets, as well as several prisoners unfairly incarcerated. Adol is interrogated for several days, then breaks out of prison with his cell neighbor’s help. On his way out, Adol has a fateful encounter with a mysterious woman named Aprilis, who shoots him with a strange firearm then identifying him as a “Monstrum.” Adol uses these new powers to flee the prison and reconnect with Dogi but soon discovers that his Monstrum gift is also a curse — he can no longer leave the city.

Adol, Aprilis, the Monstrum curse, and the Balduq prison are the pillars supporting the story in Ys IX. Aprilis manages Adol, newly Christened with the codename “Crimson King,” and five other Monstrum recruits in an ongoing struggle against the Grimwald Nox, an alternate dimension of Balduq populated by demons that, if left unchecked, could threaten the safety of the true Balduq. Only Monstrums and others connected to the curse can see the portals leading to the Grimwald Nox, and Aprilis indicates to her Monstrum squadron that battling the forces of Grimwald Nox and exploring the prison are the keys to freedom. Adol dyes his hair black to keep incognito for most of the game, but his Monstrum form keeps his hair royally red to match his new Crimson King moniker.

For most of Ys IX, Adol explores Balduq, learns more about the city and his Monstrum allies, and battles the Grimwald Nox on one or two occasions per chapter. And of course, there’s discovering new dungeons, conquering them, and exploring new areas of Balduq prison. Every large dungeon invariably leads to the prison. Usually, one or two inmates are freed in the process. This formulaic approach to storytelling lasts for the first six or seven chapters, and it eventually grated on me. Adol’s central task was “explore Balduq” a few too many times in Ys IX, with only side quest markers to guide the player. Completing side quests and fighting semi-random battles in town fills up a meter, which upon completion, unlocks the next mandatory Grimwald Nox sequence and opens up a new district of Balduq for Adol and his friends to explore. Finding the entrance to a new chapter-ending dungeon was always a small highlight, because that meant that I was finally getting out of Balduq and could engage in more excellent Ys combat very soon.

The exploration of Balduq isn’t always a chore, because Ys IX A) diligently records how much of every environment he explores and rewards Adol accordingly; and B) makes getting around as fast and fun as possible. Monitoring map % completion has been one Ys hallmark since 2012’s Ys: Memories of Celceta, and Balduq is home to NPCs that reward Adol separately for uncovering every 10% of the map or finding specific items/locations. Hustling through the bustle of Balduq is made more convenient with an abundance of fast-travel spots and your team’s Monstrum powers. By the endgame, in addition to Adol’s zoom-teleport, your party can sprint up walls, glide short distances, break through brittle barriers, phase through solid ground, and scan the environment for hidden switches. Mercifully, Adol gains a double-jump in the opening chapter.

Those unique methods of traversal also contribute to navigating the dozen-odd dungeons and handful of open areas in Ys IX. The game spaces are very vertical yet navigable thanks to flying and climbing abilities exceeding that of any prior Ys. These areas aren’t disappointing mechanically, but might be in appearance. Most of those dungeons are the same castle walls with high ceilings as the rest of Balduq (two or three of them are abandoned sewers or aqueducts, always a JRPG favorite), and the open areas are all grassy plains or highlands. It’s fun darting around the rocky hills just outside the city walls until you find a high point ideal for skipping to a new path that could lead to treasure, but I wish the various zones felt more unique.

Definitely unique to Ys IX: Monstrum Nox are the six playable characters, who differ in personality, appearance, and fighting style enough to be a crew worthy of Falcom’s finest features. In each of Chapters two through six, Adol’s town objectives revolve around one of his new allies, eventually leading to them revealing their civilian identity and accompanying him in all of his quests and not just when they convene for the Grimwald Nox. White Cat is an agile thief with multi-hitting claw attacks, Doll is a graceful warrior who wields a bladed whip like marionette strings, and Renegade is a magic user who fires spectral projectiles out of his staff. The quarrelsome dual-wielding Hawk and the bubbly axe-brandishing Raging Bull were my favorite non-Adol characters to use in combat, certainly in part because their movesets are mostly big hits and melee charges. I can’t help it. I’m an E. Honda main in Street Fighter II and Street Fighter IV.

The cast of Ys IX goes far beyond Adol, Dogi, Aprilis, and the Monstrums. Through quests both optional and required, the player meets dozens of denizens of Balduq who all have their unique roles in the castle-town’s intrigue. The Romun Empire annexed Gllia eight years ago, and in the Balduq of today, there are clashes between the occupying Romuns, the largely Gllian knights of the Hieroglyph Chuch, remnants of the Gllian nobility, and a dormant Resistance movement in town. Adol and Dogi open a tavern called the Dandelion in an abandoned building, and their new allies share it as a hideout for the rest of the game. From the Dandelion, you can organize your quests, assist your NPC allies, and do all manner of cooking and crafting to help your fighters. And there is a TON of shopping and crafting; at least 25 merchants and 40 weapons’ worth. You’ll be revisiting specific zones to gather wood, ore, and other materials quite often if you want to equip the best gear available. If this situation sounds a lot like the castaway village in Ys VIII: Lacrimosa of Dana, the thieves’ café in Persona 5, or the other thieves’ café in the manga Cat’s Eye, you’re in the right ballpark.

Ys IX: Monstrum Nox is self-aware with its preceding games and historical influences. Gllia and the northern nation of Britai (not a misspelling) waged a Hundred Years War five hundred years prior to the events of Ys IX, not unlike the historical conflict of the same name between France and England, even though the real Hundred Years War was over a millennium after the fall of the real Roman Empire. Balduq and its prison are the Ys version of Paris, France and its historic Bastille; one character’s arc resembles the French Hundred Years War heroine Joan of Arc; and another is a specific reference to an important character from the works of Alexandre Dumas. Adol’s terrible luck with sea travel and inability to say no to people in need are acknowledged at different times, as are specific monsters resembling bosses from prior Ys games. Most of the boss fights are superb, and it’s refreshing to hear Adol openly regret discarding every weapon and relic at the end of his prior adventures.

In battle, players choose a team loadout of three characters, and each character equips a skill loadout of four moves mapped to the face buttons (activated by pressing the assigned button while holding down R1). Each character learns up to ten skills, some from gaining levels and others from finding items. Fast normal attacks and charged heavy attacks quickly accumulate SP for using skills, and slowly charge a second meter for using a supermove. Both meters build quickly enough that players will never wait long before they can use their favorite skill. Perfectly timing L1 to dodge an enemy attack or R1 to block an enemy attack counts toward the meter and briefly slows the enemy. Foes are often weak to one of three damage types — slash, strike, or pierce, with two characters specializing in each type — so switching characters on the fly, dodging and countering enemy attacks, and using every skill at your disposal is encouraged. When you’re comfortable with the action in Ys IX, it’s fun, fast, and furious.

…which makes the rest of the game feel average in comparison. The basics of movement and nuances of combat are great, but the story spins its wheels for several chapters before it becomes compelling. Ys IX‘s plot takes a few wild turns and resolves several narrative threads in its final two chapters, making them more exciting than the previous seven chapters combined. The voice performances and soundtrack are adequate, but the music in particular is a letdown compared to the high standard set by earlier Ys titles. There isn’t an animated opening music video, which is another personal bummer. The abundance of sidequest fluff is usually well-written, but feels like the game delaying or withholding its best parts. When you finally get to take part in that good Ys running, jumping, and fighting, the dungeons are a little too samey, and the Grimwald Nox shadow-tinged zones are worse. My largest single complaint about the game is its camera, which completely betrays the player if Adol wanders too close to a corner or stumbles into a cluttered section of a dungeon. I ultimately found Ys IX: Monstrum Nox a satisfying Japanese RPG, but I wish the journey getting there was a little less conversation, a little more action, please.

Story takes a while to shape a central conflict, not enough variety in setting and dungeons, the camera is the true Nightmare Mode.

Ys IX is a satisfying JRPG that builds on the exploration elements from other recent Ys games, but doesn't play to its strengths enough with pacing issues and empty spaces distracting from the action.