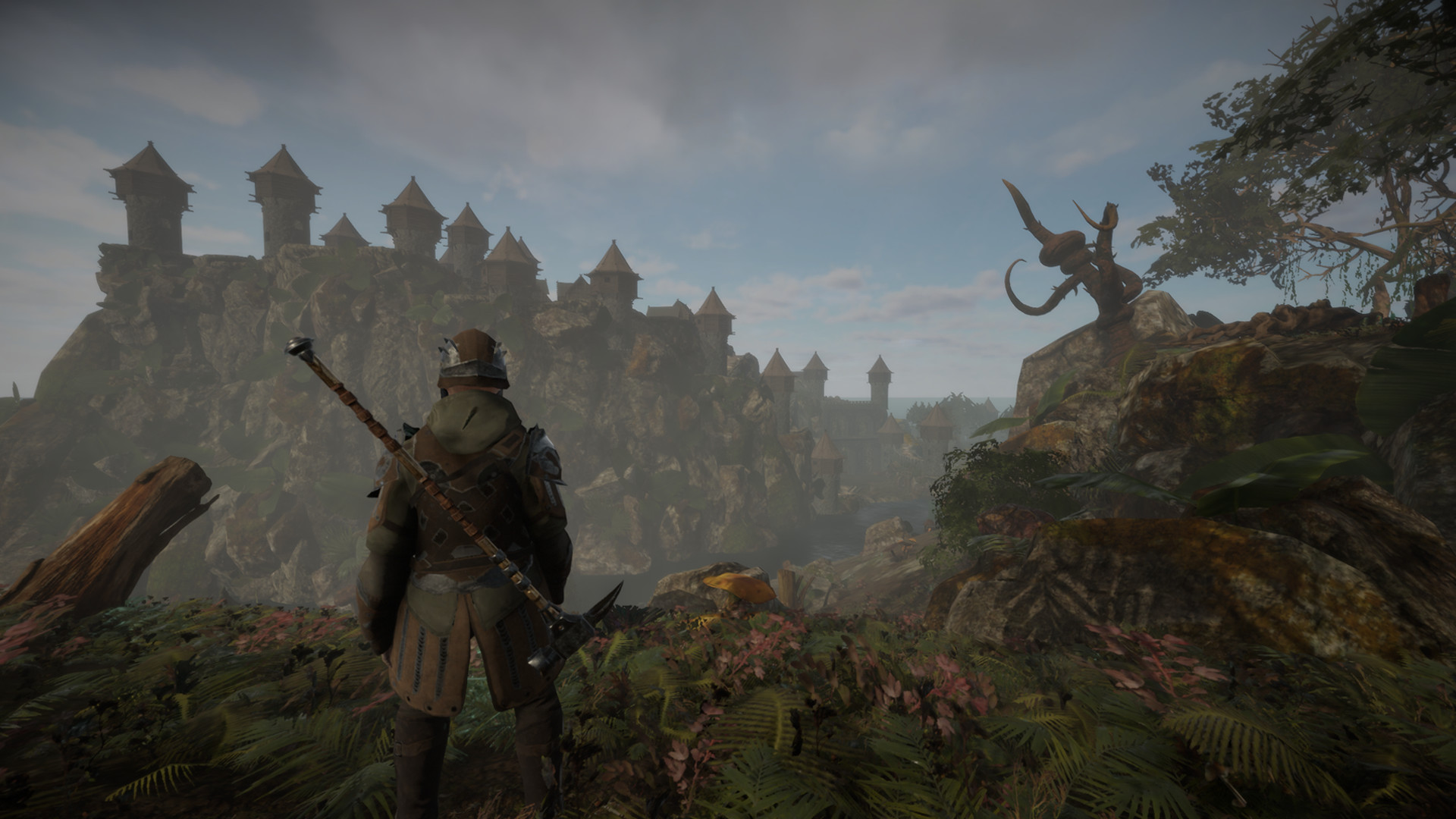 This week, PC-focused RPG fans will need to keep an eye on their wallets. A substantial number of new games are coming to Steam, with a few supporting Mac-based operating systems as well. Whether you’re in the mood for a broody, medieval-inspired experience or you have a real hankering to fell your foes with a literal (digital) guitar, you’ll likely find something to pass the time as we count down the days until we all gain six pounds eating chocolate like we’re ten years old again. As for my fellow console RPG players, last week was a great time to own a Switch; this week is a great time to… keep playing last week’s purchases on a Switch.

Pop quiz! If you were in charge of developing a game set entirely in a realm of dreams, featuring stages based upon the vivid minds of unwitting dreamers, and with the ultimate goal being the vanquishing of evil Dream Masters, what would you name the story’s protagonist? Homunculus Games, the self-publishing studio behind Endless Dreams, has cornered the market on clever answers to that question. Players will take on the role of Rem — do you get it? — as he battles his way through a world “where all minds are connected.” I don’t know about you, but I’m getting some serious Carl Jung vibes here, and that’s not just because I grew up on Xenogears and get Carl Jung vibes every time I so much as blow my nose. Combat in Endless Dreams is described as fast-paced and strategic, and you’ll be duking it out across a nonlinear 2D landscape that’s easy to get lost in, but rich with weapons and spells to help you turn the tide against over 150 types of monsters. It’s worth noting that Homunculus Games is planning to release Switch and macOS versions of Endless Dreams sometime in the near future!

This game looks gorgeous. That was my first thought upon seeing Solasta: Crown of the Magister, and frankly, it’s been every other thought I’ve had thereafter. Back in June, studio Tactical Adventures showed off Solasta: Crown of the Magister with a fairly stunning trailer. A limited-time demo was made available around the same time. Now, the officially-licensed, D&D-based role-playing epic is entering Early Access, letting players climb through the ranks to Level 6 and navigate the story’s entire first act. (That sounds kind of similar to how Larian Studios recently handled things for the Baldur’s Gate III Early Access phase.) The good news is that Tactical Adventures is still aiming for a 2021 release of the full game, with a hopeful eye toward a six-month period between now and then. You can’t get much closer to pen-and-paper RPGs this week without an actual pen and paper, so give Solasta: Crown of the Magister (and its damned good visuals) a try this Tuesday.

On the other hand, there is something deeply unsettling to me about the visual presentation of Tenderfoot Tactics. And I don’t mean that in a negative sense! Just look at that creature above. Look at the creature that your party of stalwart, magically-gifted goblins has come across at the edge of some autumnal forest. It’s staring at them with… with… with a face, and I can’t quite qualify why I feel a sense of terror drifting through my veins right now, but I do! (Just wait; I’ll find out this is a friendly fellow and feel bad forever.) The goblin heroes and heroines herein will need to manipulate the elements available across their archipelago-based environment. You’ll open chasms, raise mountains, boil lakes, drain rivers, and “start fires you’ll later regret.” (That sounds like a challenge.) Who exactly are you saving the world from? Not who, but what — a fog is spreading throughout the land, turning everything it touches into noise. I don’t entirely know what that means, but it doesn’t sound good, so I’ll do what I can to stop it from happening in Tenderfoot Tactics whenever I’m not busy screaming at whatever that thing is in our screenshot.

It’s a damn good thing the little dude pictured above has some kind of blue balloon over his head, because if he didn’t, well, I have no idea what might happen. What I can tell you is that Throne of Fate is a hardcore dynamic roguelike RPG, so it’s reasonably safe to assume that the big, green dude to the left of the little dude wants to kill the little dude quite dead. Created by ENOOPS, Throne of Fate offers players that most classical of tough-times roguelike paradigms: you’re going to die in this game over and over again, but at least you’ll know what’s coming the next time around. It is precisely this addictive sort of loop that some folks just can’t get enough of, and since ENOOPS plans to actively update the game world, steadfast gamers will need to be on the lookout for fresh dangers. Perhaps this is the perfect Halloween game… or an allegory for the year 2020.

Aldorlea Games is on a roll. Just this month alone, they’ve released The Summoner and Inferno. There’s no hyperlink for Inferno, in fact, because the two games even released on the same week, so you can read about them both with just one click. Now ain’t that a bargain? Not content to rest on recent laurels, Aldorlea Games is now dropping Fantasy Heroes 2 come Thursday. Fantasy Heroes 2 follows the exploits of a mentalist named Valentin and princess knight Anais as they race against time to stop a deadly virus. (Yes, I do consider it highly unfortunate that I wasted my obligatory 2020 allegory reference on Throne of Fate.) The game is a standalone experience in the vein of, say, Final Fantasy VI to Final Fantasy VII, so you won’t need to worry about missing pivotal story beats if you hop right in with the sequel. Eye-catchingly colorful and featuring monsters with hip names like “snail guardian,” Fantasy Heroes 2 might be a winner.

CRPG vets with far more wisdom than I possess might shake their heads at me for such a simple comparison, but I’m sensing a lot of The Elder Scrolls in Isles of Adalar‘s DNA. Specifically, The Elder Scrolls III: Morrowind. Environments appear to be memorably dingy and downright alien at times; you should really see the rest of the screenshots on the Steam page to see what I mean. An Early Access release, Isles of Adalar will nonetheless launch with detailed subsystems such as character progression, stealth mechanics, crafting, companions, and reputation across multiple factions. Peakway Software says we should expect Isles of Adalar to remain in Early Access for two to three more years, but judging by what I’ve seen thus far, it could well be worth picking up this year.

I don’t know about you, but there’s something going on with LUNA – The Shadow Dust that makes it hard for me to turn away. Indeed, the fully-animated, point-and-click adventure turned heads during its PC release earlier this year, touting plenty of “Very Positive” reviews. At last, this magical journey about a boy and his cute animal companion, The Last Guardian, is here for PS4 — wait, that’s not right. All jokes aside, LUNA – The Shadow Dust looks is a lovely time. The puzzles you’ll solve and the secret memories of a bygone age which you will encounter are all brilliant. Cinematics are conveyed wordlessly and paired with the right sort of unsettling soundtrack for a game rich in ambiance. This one has my personal recommendation!

In Clouds of Rain, “a storm is rising.” The game is set in the skies of a forgotten world, where a decadent civilization is rapidly consuming its every resource. That includes massive beings called Leviathans, once worshiped as gods but now being hunted nearly to extinction for their spinal fluid. Only the Sky Watchers are left to mount a desperate defense of the Leviathans, but their struggles against the hunters seem without end. That’s quite the narrative hook as far as I’m concerned. As for gameplay, battles are a strategic affair; you’ll study your foes and position yourself accordingly, utilizing exclusive weapons and moves for each playable character you’ll meet during this epic journey. In a nifty display of accessibility awareness, developer Graphic Line Games offers three different modes. The first, Tactical Mode, is a difficult endeavor where every resource counts. Story Mode decreases the difficulty, allowing players to focus more on the plot beats along the way. Finally, there’s Relax Mode, which negates the difficulty altogether. I always appreciate it when creators offer these kinds of options. Some folks just want to enjoy interactive stories without the fuss of nuts-and-bolts RPG crunchiness, and that’s just as valid an approach as min-maxing and level-grinding!

Rounding out this week’s list is one of its more unique entries. Tuneria takes inspiration from games like The Legend of Zelda: Ocarina of Time — and in one integral way, it absolutely shows. This, you see, is a music-focused RPG. You’ll play powerful tunes in battle courtesy of a groovy guitar, which brings to my mind the brass picks wielded by Nikki and Irenes in Chrono Cross. But in a deliberately more Zelda twist, your tunes will unlock new areas and uncover all sorts of secrets. Your keyboard will be your real-life musical tool, allowing you to mimic fret-holding and string-strumming like the raddest office worker ever. Join the Songsmiths and embark on a mythical quest!

In a word, I’d describe this week’s lineup as “eclectic.” I say it often (which is a good thing!) but there’s likely something for everyone in this batch. Just sifting through our screenshots before I finish up the article, I’m reminded of just how diverse a genre RPGs can be. What a warm, cozy holiday sentiment. Stay sharp, RPGFan readers!