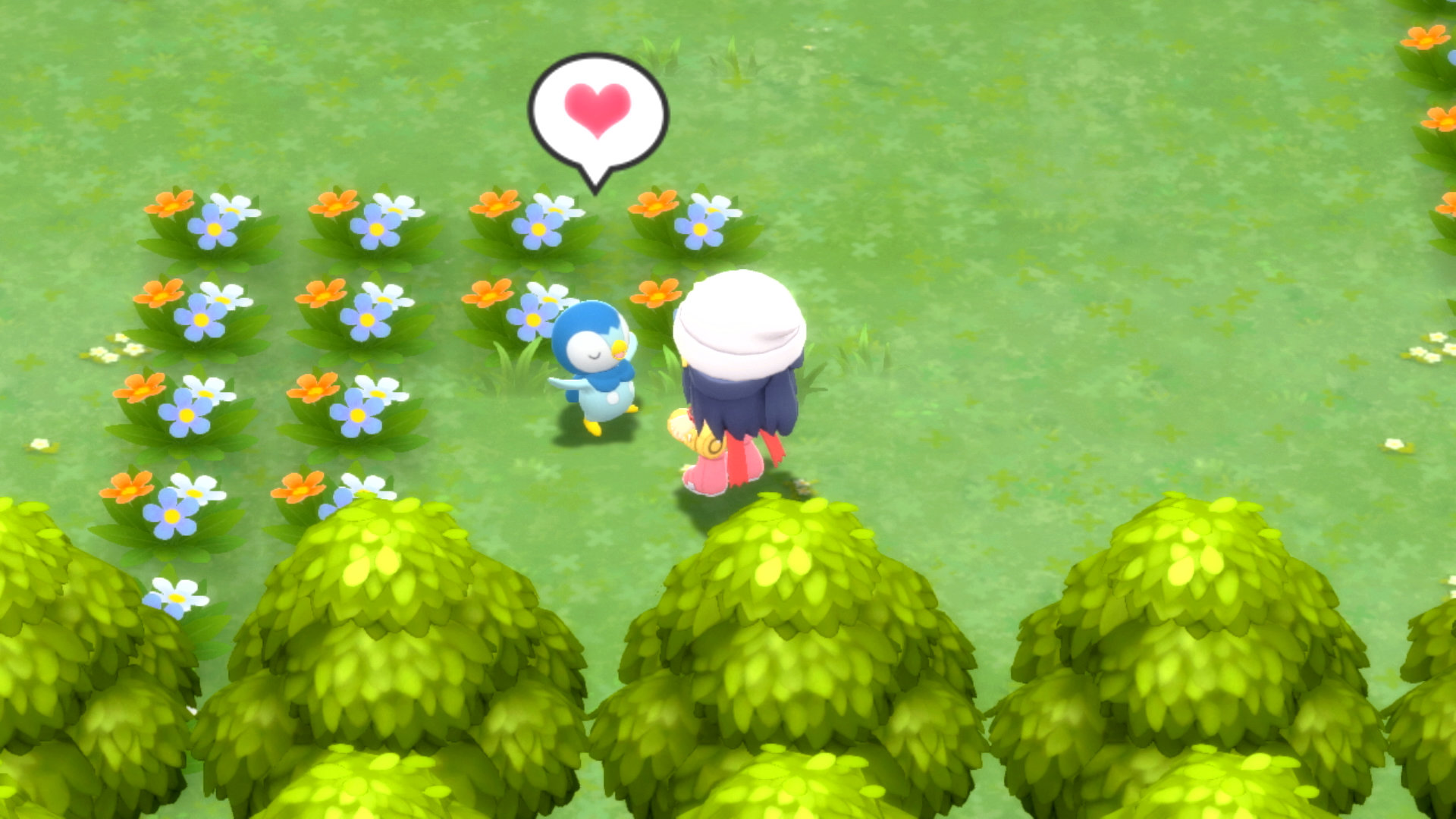 It’s a Pika week for fans of Pocket Pikas. With the Pika-rrival of two new games in the celebrated Pika-mon franchise, it’s time to take a remastered Pika-at the fabled land of Sinnoh. So what will we find when we scale Mt. Pika-net? Are “chu” ready for more than just a “Pika” this fourth-Pika-rational Pika-rrival?

Are any of you still reading this, or have you given up on me and exited the Pika-page?

It’s not all diamonds and pearls this week, although I’m sure Nintendo would prefer you to believe otherwise. We’ve also got a game that would be a dungeon — but alas, it is not. There’s an elementary investigation afoot elsewhere in this article. Also, some niche IP is launching a mobile tie-in title. So it goes.

First of all, the developer behind Sherlock Holmes Chapter One is Frogwares. Frogwares. I could type Frogwares all day and never get bored. Would you be criminally opposed to me just typing Frogwares a bunch of times and calling it a day? Probably. That’s not the content you’re here for. Even if it’s the content I’m here for. But I get it — this isn’t about me.

It’s about Sherlock. Specifically, Sherlock before he was a household name. Or rather, Sherlock, as a household name, but set in a fictional timeframe in which he is not yet a household name within his own canon. All this is to say he’s 21 years old. And unlike JRPG protagonists by the age of 21, no one’s ever heard of him, on account of being 21. And looking a fair bit like nobody in particular, if Frogwares’ (ha, snuck it in again) intentionally unassuming character design is anything to go by.

So, what’s the deal? Young Sherlie’s on a dangerous Mediterranean island. Frogwares (got ’em) wants you to know it’s an “open-world” island, but the game’s very own launch trailer clearly indicates this is less “bandits in caves” and more “classic deductive conversation-wheeling.” This is good because I wouldn’t trust Sherlock Holmes to save the realm from an undead dragon king. Though come to think of it, yes, I would. Huh. I think I have a pitch for Frogwares’ next game. (Got ’em again.)

Would you trust Victoria? Or the stranger? In most circumstances, I’m inclined to trust the person whose name I know over the person whose name I do not know. But there are plenty of exceptions, right? I mean, I know who Benito Mussolini was, but if he came back from the dead and offered me five bucks “for a favor,” and meanwhile a stranger on the bus said, “I wouldn’t do it if I were you,” it’s the stranger for me ten times out of ten.

But that’s the thing about this Arcadia Fallen screenshot. I’m not entirely sure who it is that’s talking. I’m going to go with the stranger because their name appears to be a series of three question marks. I’d like to think Victoria’s name would be presented as “Victoria.” But what if I’m mistaken? The point is, if somebody insists a bird is not a malignant spirit, I have to assume the worst. Because why the heck else would they say it? If it’s Victoria, after all, I’m sorry, but this is where our friendship ends. That bird cannot be set free, madam.

Arcadia Fallen is filled with these moments. You’re a young alchemist, you see, and you’ve been unwittingly bound to an illegal spirit. But, what the hell is an illegal spirit? Moonshine in the Prohibition era? No, it’s probably a human spirit (or a bird…?) who should not exist. Because sure enough, you’re thrust into a war between humanity and magic. I’m guessing, though I could be mistaken, that I’m supposed to side with humanity here.

But come on. Magic.

Wisely, Square Enix has made it possible to summon Ifrit in Final Fantasy VII The First Soldier, a mobile-only prequel to the burgeoning new Final Fantasy VII Remake. It also happens to be a battle royale stint with guns and swords and, well, Ifrit. And the act of summoning him. Our very own Wes Iliff got to dart around this mobile version of Midgar this summer, and they seemed to have some understandable reservations.

I’ll be honest here; there’s very little that screams “get this” to me despite being a colossal Final Fantasy VII fan.

But that’s OK. Not everything is about me. So long as there’s a crowd, and at least one of our readers is in that crowd for this, I’m happy. Go in guns blazing. Slice and dice your foes. Prove your worth as the first SOLDIER.

The first rule of Undungeon club is “do not talk about Undungeon as if it is a dungeon.”

Now that I’ve cracked the same terrible joke that I guarantee you’ll find elsewhere in the gaming media world — we’re only occasionally clever if I’m being candid — we can move on to the part when I talk about the game. Your mission is to travel dimensions to restore the Metaverse, which, if the alleged “Web 3.0” of NFTs and such which awaits us really is going to have “Metaverse” as its tagline, I’ve gotta level: I recommend we allow the Metaverse to burn instead. But maybe I’m just old, bitter, and afraid.

The story of Undungeon purports to be “immensely rich science fiction.” That’s good. I like that. Developer Laughing Machines wants the game to feel like an old-school action RPG in a modern wrapper, which I’m pretty sure I’ve written about other new releases in the past, but that’s OK because it’s never not a neat idea. There’s a free demo up on Steam and your characters have happy, neutral, or sad faces in cute little bubbles during combat to let you know how they’re doing. Go check it out, maybe.

I freaking adore Sinnoh. No, it wasn’t my first foray into the world of Pokémon. I respect and understand why so many bright and shiny statements about particular entries in long-running video game series often blend directly into “it was my first, and” but I started with Red & Blue. But between Sinnoh and its direct locational predecessor, Hoenn, I could write you a book about how happy I am to be alive.

What’s my deal with Sinnoh? It’s the last truly open Pokémon region. Black & White are my favorites overall, but Unova began an undeniable spiral toward linearity that I’m personally not too keen on. I come to the franchise foremost for the sense of adventure, and while I don’t abhor the latter regions, their layouts just don’t put that Pika-twinkle in my eyes. Sinnoh is awesome. It directs you, to be sure, but it also lets you explore. Its routes are vast, which really adds to the journey. In fact, the reason I typically falter in my efforts to get into the postgame catch-’em-all spirit is that I’ve run out of places to explore. My ideal postgame? New routes. I am not even kidding.

You aren’t here for me to ramble about Sinnoh so much as to be duly reminded that Pokémon Brilliant Diamond & Shining Pearl are out this week. There’s no denying the fact that fandom reception to their unveiling and subsequent news bits has been… diverse is a good word for it. It appears that a handful of special cutscenes, as well as in-battle bits, are the only time we aren’t subjected to a chibified design. And if you aren’t hot on that chibified design, there’s nothing for it but to grin and bear it.

Factor in the fairly evident examples of Platinum‘s storyline improvements and Battle Frontier, and it’s a recipe for grumpiness. But I’m here for it. I love Platinum, but as I’ve said, I love Sinnoh most of all. Mt. Coronet and her pristine surroundings seem intact. A bevy of quality of life improvements like the removal of HM requirements (HMs still exist, but now they summon wild Pokémon to do your bidding, which is questionable but welcome) and all the bells and whistles of more modern generations is enough of a personal trade-off.

The Grand Underground seems… grand, with chances to catch Pokémon we might not find otherwise. Raminas Park seems rad, too, with its assortment of legendaries. And I get to play dress-up, which everyone knows is the real reason to return. My point is, I get it. Not everyone is enthralled. But I hope my fellow fans can find some good here because I happen to believe Brilliant Diamond & Shining Pearl look promising!

And that, as they say, is that.

Does anything catch your eye? I suppose it’s plainly apparent which new release I’ll be spending the bulk of my time with, but I’m a hopeless romantic for that franchise.

Until next time, remember to love and be loved. Go plant a tree! Trees are good! We need trees.