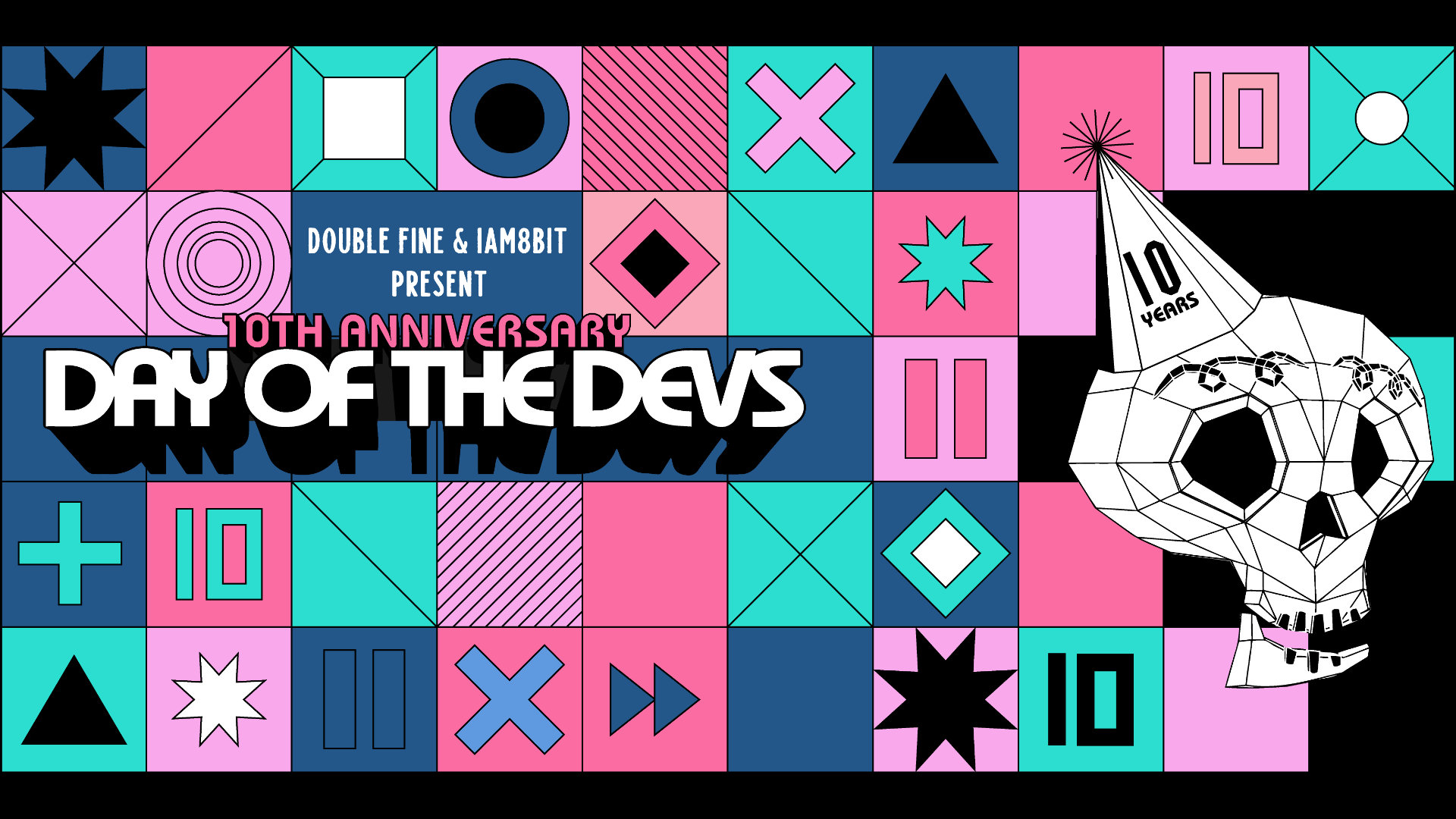 I mentioned last night how Double Fine and iam8bit’s Day of the Devs came into being. Today is all about the games showcased at this shiny 10th anniversary event, and make no mistake — it’s a lot. Nearly 80 games are being showcased across the digital and in-person events and the Steam event page; a sharp rise from the eight games seen at the debut event in 2012.

At the end of this article, I’ll list out the games that will be at the in-person event and how to attend (it’s free) if you’re in the area. But hey, let’s talk about some of the key games shown at the digital showcase, yeah? Yeah. Let’s do it.

Announced in February by Yacht Club Games (of Shovel Knight fame), Mina the Hollower is a 2D adventure that would be right at home on the Game Boy Color (if the GBC was widescreen). Visually, Mina features pixel art that is old-school not simply by virtue of using big chunky pixels, but also by using an intentionally limited color palette, which is why it really does have a sense of being a forgotten handheld game from the past.

While I have not seen the game being billed as a Souls-like exactly, the developers note that Mina’s attacks and movement are very deliberate, if not slow, by design. Weapons have a weight to them, and it seems learning how each one feels will be key to winning the day — no button mashing here. Mina also can dodge by burrowing underground, which seems no less essential to surviving some encounters. The top-down presentation immediately calls Link’s Awakening to mind, with a “single sidearm at once” system like classic Castlevania, permanent upgrade trinkets, and Bones that act as EXP. While the gothic or macabre setting of Mina the Hollower lends itself well to using bones as experience, I am curious if that was decided before or after Yacht Club Games chose to name the level up screen as “Bone Up.” Either way, Mina the Hollower looks excellent, and I look forward to it releasing sometime next year. Yacht Club Games’ Kickstarter page for the project contains a treasure trove (shout out, Shovel Knight fans) of information, so check it out if you haven’t!

It’s hard to understate Roberta Williams‘ role in the video game industry. Roberta and husband Ken Williams founded Sierra On-Line in 1979, which would go on to become one of the most well-known producers of graphic adventure titles — fitting, since they essentially created the genre. While some of Sierra’s earliest works may not have brought them a large amount of attention, the 1984 debut of King’s Quest (and its five sequels and later reboot) changed everything. Okay, we aren’t here for a Sierra history lesson. But history is important to understand the context of where Roberta Williams got her start in the industry, because what inspired her to get into creating video games was Colossal Cave Adventure, a text adventure game created by William Crowther in 1976.

So when we talk about the fact that Roberta and Ken Williams are remaking this text adventure into a fully 3D, VR-centric experience, well, that’s a remake that goes a fair bit further than most. To take the experience and nature of discovery from a game that was entirely experienced via text into VR, and to remake a game at all forty-six years later is basically unheard of. This is the first game the husband and wife team has made since the late 1980s, but it must just be an experience to be able to present the game that kickstarted your interest in game development for a completely new generation of players. The game looks nice so far, if a bit simplistic, and the way the narrator is used in the trailer echoes the presentation of a text adventure describing your surroundings, so it will be interesting to see how it comes together.

Oh, and while I’m mentioning VR alot, Colossal Cave will be playable on Windows, macOS, Meta Quest 2, PS5, Xbox X|S, and Nintendo Switch. There’s no release date yet, though apparently it’s still intended for release before the end of 2022.

We haven’t seen much new on Slime Heroes since we talked about it during June 2021’s gaming shows, but the slimy adventure RPG continues to look adorable. In today’s presentation, we got more info on the gameplay. Your slime hero can wield several types of gooey weapons, each of which has its own moveset. Skill gems can enhance your character, and along with melee weapons, you will be able to wield elemental magic against your foes. Slime Heroes‘ dungeons seem to have somewhat of a focus on puzzles, perhaps akin to Zelda, and we got to see some creatively slimy animal boss concoctions, like a bearcupine and crabturtle (my spellcheck is mad at me right now). Developers Pancake Games have not revealed a release date yet, but my hunch is that this is one of those indie games we may learn is closer to release than expected, so hopefully we learn about a release date soon! So far, we just know that Slime Heroes is available to wishlist on Steam.

It’s quite possible that Sea of Stars is atop many RPG fans’ most wanted list from today’s presentation, and I’d be lying if I said it wasn’t likely true for me, too. Every time we see more of Sabotage Studio’s retro-styled RPG, it looks better and better. As you know — and can see in new screens above — Sea of Stars is a stunner. It’s that perfect blend of Chrono Trigger-level 2D art with modern lighting and effects. The retro RPG influence runs deeper, with Chrono-esque combo attacks and Super Mario RPG-styled timed button presses in battle, and enemy encounters right on the field, but that doesn’t mean anything about Sea of Stars feels derivative. The game looks fresh and exciting, and… wait, a retro RPG where we can just freely swim, and the water isn’t just an off-limits zone? Fantastic. I admit I’m already sold on the game, so just getting another peek only makes me more interested in playing it.

We saw Thirsty Suitors earlier in the year, and it’s a refreshingly different type of game that looks like a blast. The game’s tagline summarizes it well: “Battle Your Exes. Disappoint Your Parents. Find Yourself.”

Protagonist Jala has burned a lot of bridges in her young life, and is now trying to reconcile with a host of exes in addition to her family. Each of these take the form of different types of gameplay; Making peace with Jala’s family happens at home, specifically in the kitchen. Through wonderfully over-the-top and stylish… I can only call it “action cooking,” you will help stir up family favorite South Asian-inspired dishes and smooth things over at home. When it comes to Jala’s many exes, you confront them in turn-based combat that blends Thirsty Suitors‘ intensely colorful visuals with quippy dialogue, amusing “attacks” such as summoning Jala’s mom to lay the verbal smackdown on the opposition, and (hey, again!) timed QTE-like button presses and movements to pull of attacks. Well, they’re more like “attacks” since in theory, you are trying to reconcile and come to an understanding with each person. Much like real life, when a relationship falls apart, there is not always a clear “bad guy,” and it’s great to see this realistic take on making peace with one’s past, even in the fantasy-like color palette.

Oh, and there’s also interesting skateboarding sequences so Jala can blow off steam and battle skate punks that sometimes seem to take place in weird abstract space. Why not, right? Thirsty Suitors is coming to Steam and all consoles “soon,” and there’s a demo on Steam now.

There were a handful of other titles in the presentation, and many, many more to browse at the in-person event and Steam event/sale page. We got a peek at some new DLC for the recently-reviewed Escape Academy, with Escape Academy: Escape from Anti-Escape Island, which expands the escape room gameplay into new areas and situations.

While sadly only appearing briefly, it’s heartening to see the incredible-looking Demonschool on this sale page, so hopefully we’ll learn more about it soon.

Another Crab’s Treasure, a refreshing Souls-like that trades in gothic horror for brightly colored sealife, continues to look like a blast, and I don’t know where VIDEOVERSE suddenly came from, but an intensely retro pixel-based visual novel set in the early internet days of forums and ICQ-like chat apps feels like it’s targeting those of us of a certain age.

Cryptmaster is an inventive take on dungeon crawling, with its blend of black and white imagery, and Scribblenauts-esque freeform text (and voice!) input to traverse, do battle, and progress through the game. Games like this must be prepared for an incredible amount of potential player input, and creatively respond when players try to use their… eggplants to solve problems, so it’ll be interesting to see how creative you can get with it.

There’s plenty of non-RPGs that I’d love to talk about, but that’s not why you’re here. Still, I encourage you to take a peek at Animal Well, The Siege and the Sandfox, Evolutis: Duality, A Space For The Unbound, Terra Nil, and more. Below is the full list of RPG and adventure titles featured with links to their Steam pages:

When: November 5 from 3pm – 7pm PT
Where: The Midway in San Francisco
How to Attend: RSVP on the Day of the Devs website – it’s free, though there is also a Humble Bundle for the event that includes VIP access and a ton of games.

Games Playable at the Event

Below is the full list of games that will appear at the event, with titles RPGFan covers in bold for your scanning pleasure. (* indicates the first game a game has been playable to the public)