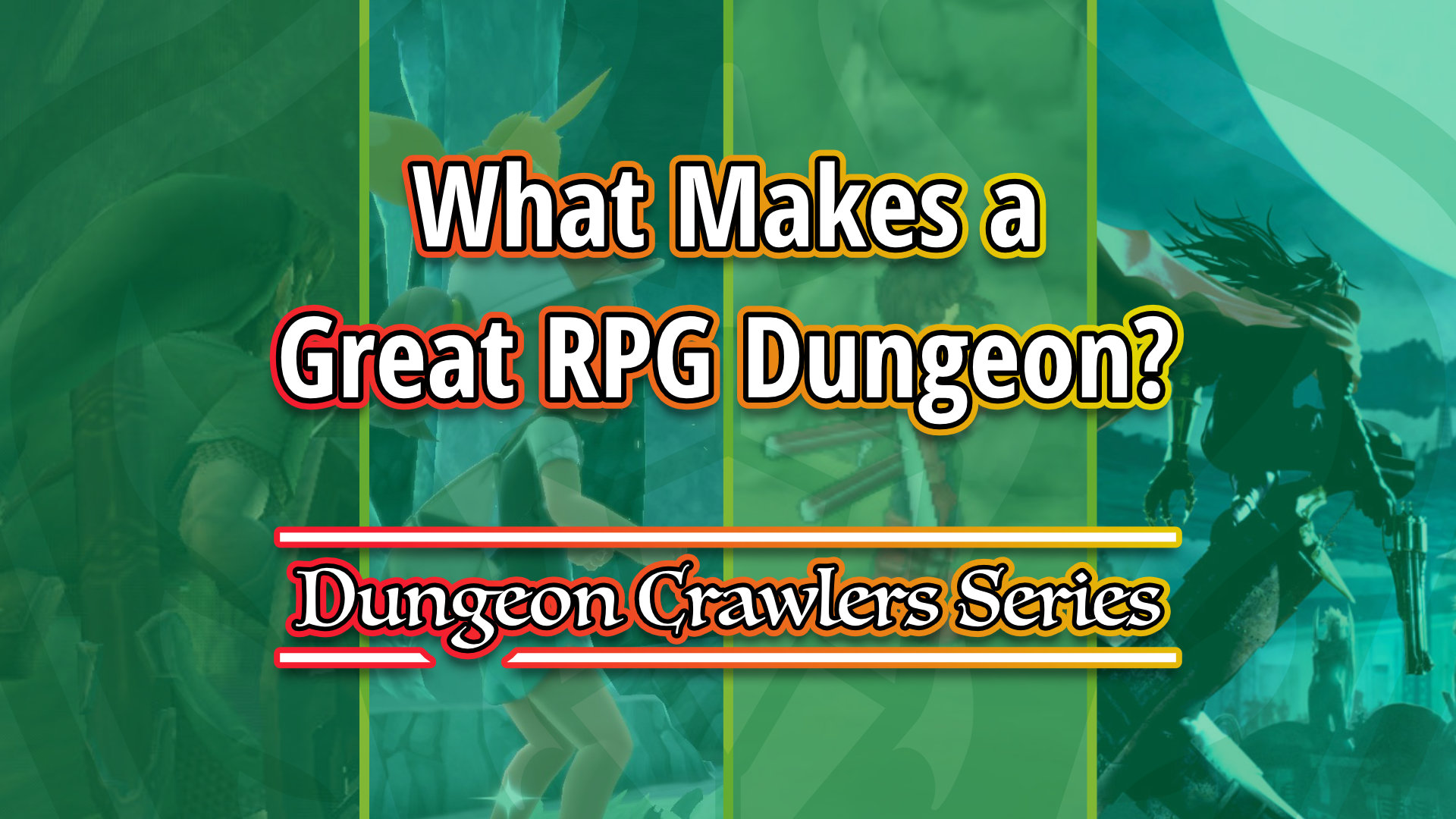 I don’t know about you fine folks, but the RPGs I grew up with were chock full of dungeons to explore — whether they were caves filled to the brim with bats and other nasty critters or traditional elemental dungeons (think lava caves, water temples, and dark forests) filled with traps and puzzles. Dungeon navigation has always been one of my favorite aspects of any good RPG.

That said, most RPGs I’ve played over the past several years featured mediocre dungeons that left me questioning what makes a good RPG dungeon. This thought experiment led to what you are reading now, the first in what I am hoping will be a series about what goes into making great dungeons. This first feature covers the elements that one might consider when thinking of dungeon design. Subsequent entries may take a closer look at series-specific dungeons, concepts, or other aspects of dungeon design.

Without further delay, let’s get to crawlin’!

When it comes to presentation and atmosphere, I find that the best RPG dungeons include at least some of the following: interesting locations, inspired visual styles, great sound design, and themes that play into your interpretation of the dungeon. All these elements contribute to the way a dungeon feels as you play.

Xenoblade Chronicles is one game that effectively works presentation and atmosphere into its explorable areas. Xenoblade doesn’t exactly have traditional dungeons, per se; instead, it has large, open-ended areas full of monsters to fight, items to find, quests to complete, and secrets to discover. It might seem like a stretch to consider these areas dungeons, as they are practically the opposite of what we view as traditional JRPG dungeons. Still, I wanted to find a way to tie Xenoblade into this feature because the game is just so damn good at capturing the concepts of presentation and atmosphere.

While Xenoblade offers many great areas, Satorl Marsh stands out for me. When you first arrive, it looks like your typical swamp level with bland colors and standard swamp enemies (frogs, lizardmen, and weird bird creatures), and it doesn’t feel particularly inspired. Then the sun sets, and the entire place blossoms to life. The music shifts from mysterious and upbeat to a hauntingly beautiful theme. Mighty enemies perch in trees and wait for players to get too close. The gas rising out of the bog starts to glow, and the entire place lights up with an ethereal light. It is astounding. Xenoblade effectively works presentation and atmosphere into many of its huge environments, but Satorl is the one that always comes to mind for me.

Xenoblade showcases on a grand scale the sorts of presentation and atmosphere a game area can offer. The other example I would like to put forth is on the exact opposite end of the spectrum, but it manages to create a similar sense of wonder within a much more limited scope: Undertale. In particular, I want to mention the segment where you navigate Waterfall. The simplistic art style lends itself well to feelings of isolation and wonder, especially with the dark color palette and creepy music playing in the background. It all culminates in Undyne hunting you down with spears of light.

The Lava Caves in Baten Kaitos: Eternal Wings and the Lost Ocean offer one of my favorite moments. The Lava Caves themselves are pretty forgettable, but the story beats that occur there seal it in my memory. I really don’t want to spoil it, but it involves a pretty questionable decision by the main character, Kalas, and it is a massive slap in your face. Just go play the game if you haven’t. Its dungeons offer many memorable moments, such as the climb up the Celestial Tree, the random Tower of DRUAGA cameo in Detourne, the Mystical Garden, and the siege of Castle Elnath.

That said, dungeons can be memorable for all of the wrong reasons, too. Take a look at the Water Temple in The Legend of Zelda: Ocarina of Time. Although it’s a masterfully crafted dungeon that demands spatial awareness, many players remember it as an exercise in frustration where you constantly open and close the menu to switch between Kokiri Boots and Iron Boots.

Another unfortunately memorable dungeon exemplar is the Temple of Darkness in Tales of Symphonia. To fight the boss, you need to lead its scattered bits and pieces to the bottom of the temple. The problem here is that the boss pieces can’t keep up with your normal movement speed. They get caught on corners and fall behind a bit too easily, making it a slog to get them to the boss room.

All right, you found the next dungeon on your quest to stop the villain or collect the magical MacGuffin. It’s so exciting, right? To make progress, you need to delve into the depths of the dungeon and figure out where to go. One wrong move and you can get lost in a winding maze of corridors. Wait…isn’t this kind of dungeon boring?

These days, most RPG dungeons I explore boil down to labyrinths filled with frustratingly high random encounter rates and the occasional puzzle. These puzzles usually aren’t remotely interesting: maybe you activate a switch to open a door on the other side of the map, or maybe you push a block onto a switch to unlock the path forward. Whatever happened to dungeons filled with puzzles that get you thinking about how to make progress? What about dungeons that utilize interesting game mechanics in new and exciting ways?

My favorite example of thought-provoking puzzle design comes from the Golden Sun series. In Golden Sun, you solve many puzzles in dungeons using Psynergy, the game’s magic system. Each Psynergy spell acts like its own tool to solve specific puzzles. You might use the Move Psynergy to push or pull a column that you can’t otherwise get to otherwise. You might use Whirlwind to blow away leaves that are covering up a secret entrance to the next dungeon, or to free a stump you can use to solve a different puzzle. The most exciting puzzles demand multiple Psynergy spells to solve. For example, you may need to use Douse to create a puddle of water, cast Freeze on that puddle, and climb the ice column you just created to bridge a previously insurmountable gap. The more Psynergy you collect, the more puzzles you can solve, and the more puzzles you solve, the more cool stuff you collect — generating a rather satisfying gameplay loop.

Sometimes, exploring a dungeon is more about what’s off the beaten path rather than what’s on it. A good dungeon should incentivize you to explore it thoroughly. Maybe the dungeon is teeming with hidden rooms to uncover, or perhaps you can find rare items in the dungeon or on its denizens. Other times, a dungeon might reward you with lore fleshing out the game’s world, character backstories, and other tasty bits of information. Most RPG dungeons avoid this, but long, winding corridors ending in a treasure chest aren’t exactly inspired. But hey, at least you get something for going out of your way.

Shinra Mansion in Final Fantasy VII is a perfect example of a dungeon that motivates you to explore it. You navigate the mansion as part of the main quest as you seek to learn about the nature of Sephiroth’s madness and Cloud’s past. However, a bit of poking around off the beaten path can be extremely rewarding. By exploring the dungeon, solving its puzzles, and beating its boss, you can earn an additional party member, Vincent Valentine, who has a twisted backstory you’ll also miss out on if you don’t explore the mansion.

You might also encounter some completely optional dungeons. By this, I mean it is possible to skip the dungeon as you complete the main campaign. There’s something special about stumbling upon a random dungeon in the overworld that you have no reason to visit besides the call of adventure! Truly great RPGs make it worth your while to go off the beaten path.

Nothing beats navigating a complex dungeon and overcoming many formidable enemies only to be challenged at the end by a massive, scary boss that gives you a run for your money. A challenging boss fight can make or break your impression of an otherwise solid dungeon in many ways. If the battle is too easy, it can make the dungeon feel anticlimactic. If the battle is too hard, it can sour your mood a bit too much. Therefore, games need to strike a balance and ensure that a dungeon’s boss accurately represents the feeling the dungeon attempts to evoke.

The real kicker is when you navigate an optional dungeon or long sidequest and encounter a demanding super boss at the end. Oddly enough, a lot of Pokémon games get this right. You find several legendary Pokémon at the end of long dungeons that test spatial awareness, navigation, and resource management. For example, when you find Mewtwo at the end of Cerulean Cave in Pokémon Red & Blue, their remakes, and Pokémon Yellow, your party is probably already pretty worn down by the strong wild Pokémon who inhabit the dungeon. Now imagine not just defeating Mewtwo, but catching it, too. Sure, you can just whack it with a super-effective attack and knock it out quickly, but why bother tracking it down if you have no intention of catching it?

Additionally, dungeon bosses might test your understanding of mechanics that the dungeon highlights. The Legend of Zelda series is the perfect example of this. Link often finds items allowing you to traverse dungeons and unlock their secrets, and dungeon bosses often test your proficiency with these items. Successfully defeating many dungeon bosses requires you to master these items and is often incredibly empowering for this reason.

What Are Your Favorite Dungeons?

Dungeon design is no simple feat, and I am sure that more goes into dungeon design than I can imagine. Still, I think these aspects establish a solid baseline for what we can (or should) expect from an ideal RPG dungeon. Of course, no two games are the same, and some series may edge out others when it comes to certain facets of dungeon design. Nonetheless, I think it is reasonable to expect that most RPGs will hit at least some of these dungeon design principles.

So, fellow RPG dungeon crawlers, what are some of your favorite aspects of RPG dungeon design? What are some great dungeons you would like the RPGFan team to take a closer look at? We would love to hear your thoughts, and you can share them with us on all major social media platforms!