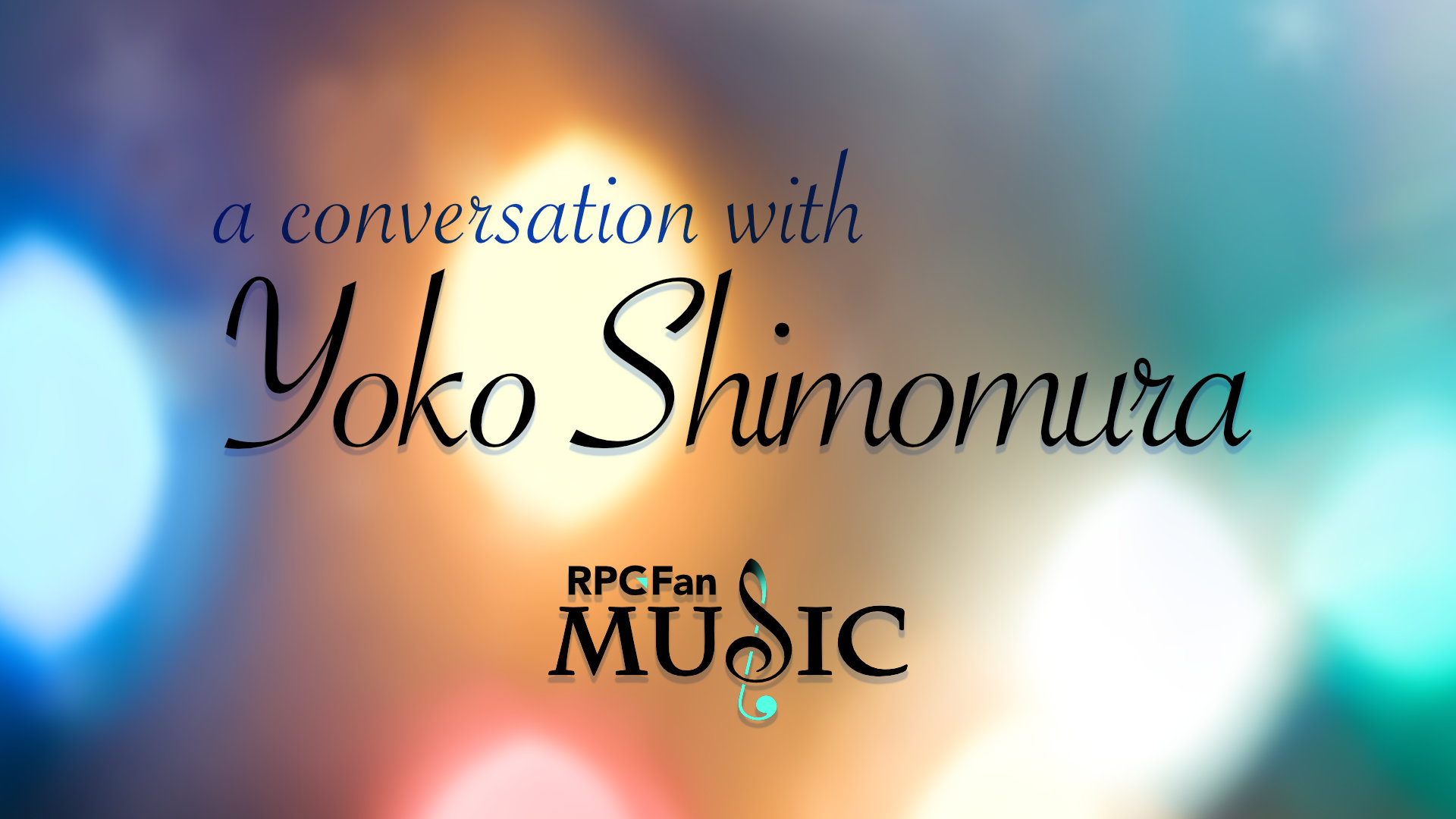 Yoko Shimomura is one of the most prolific and well-beloved composers in the video game music scene. With a diverse body of work ranging from Street Fighter to Kingdom Hearts, Shimomura-san is truly one of the most versatile and talented musicians in the field. She recently took some time out of her very busy schedule to answer a few of our burning questions. Check out her responses below!

RPGFan: Can you tell us a little bit about your background? What kind of musical training do you have? How did you become involved writing music for video games?

Yoko Shimomura: I’ve always liked classical music and the piano, so I took lessons for about 15 years including the time I was a student. During those 15 years, I also learned many things other than the piano, like flute, trumpet, percussion, conducting, choir, choral, musicology, music history, music psychology, music theory, composition… my piano skill didn’t improve that much, though (tears). I was struggling to figure out what to do after that, but I really wanted to continue with music.

Then I saw a posting on the job posting board in my school that there was a “now hiring” post from a game company. I applied for it because at the time I loved playing Famicom. My teacher told me I would never get that position, but for some reason (laugh) I got accepted. So that’s how my game composer life began. It was really really tough working because in my school I only learned the most basic-of-basics of composition. I thought about quitting so many times, and there were times I came home crying. I learned how to write music as I kept working.

RPGFan: How do you approach a new project? Do you start with an idea in mind and work with that, or do you generally work based off what information the developers give you?

Yoko Shimomura: Both approaches. I try to obtain as much information as possible, such as the concept art and the scenario, and if [the developers] already have some kind of an image for the music I try to stay consistent with that.

Other than that, I expand my image freely, thinking things like “what is the feel?”, “maybe like this?”, “that would be interesting”, and I even think about the situations that aren’t related to the game to sort of enjoy the process on my own. Eventually these images come together to become one path, and that is usually the time I get the “this-is-it!” moment.

RPGFan: Do you have a favorite among your own works? I really love Drammatica – It’d be great to see another album like that!

Yoko Shimomura: Thanks for liking Drammatica! I’m very happy to hear that. I would like to make an album like that again. It might be difficult, but I’d like to do a concert, too.

RPGFan: Sinfonia Drammatica was very well-received. Do you anticipate participating in a project like that again – maybe even in the United States?

Editor’s Note: SD was a concert series featuring the work of Shimomura-san and Chris Huelsbeck. You can read more at Square Enix Music Online.

Yoko Shimomura: It was a wonderful project, wasn’t it? I would love to listen to it once again. I’m always pretty busy composing, so unfortunately I can’t lead the concert production. But if in the future there’s a project like that and I get a request to participate, I would try my best to support it. I hope it happens again!

RPGFan: What is your favorite soundtrack or album (from another composer)? Is there one particular song you really love?

Yoko Shimomura: Well, there are many, but I would have to mention Ozora wo Tobu from Dragon Quest III. I felt like I was struck by lightning the moment I listened to it for the first time.

RPGFan: Would you consider composing a soundtrack for a western game?

Yoko Shimomura: Yes, I would totally do it if I got an opportunity!

RPGFan: Between the recent “SQ” albums covering LiveALive and SQEX’s reprint of the LiveALive OST (which, until 2012, was out of print for almost two decades), what have your thoughts been about that early work in your career? Given the chance, would you be willing to “upgrade” your own soundtrack to this game if it were to be remade for the current console generation?

Yoko Shimomura: Actually, in my opinion I don’t consider LiveAlive as my early work (a nostalgic one, though), but I can feel the aggressive-ness from the sound that only the me back then could produce. This year the soundtrack was re-released and I think it’s a very happy title because so many people love it.

I’m very thankful for the ones who show their loving support. If the game was to come out on the current consoles, to avoid sounding like a lesser quality one compare to other current games, I think I would carefully keep the taste of the original music but tweak a little.

Yoko Shimomura: The best thing is to be able to work on many different games from different developers. Another big thing is that it’s easier to do what you want to write. Lastly, you don’t have to suffer from the morning train rush in Tokyo, and this is a huge advantage (laugh).

RPGFan: If there were no obstacles in your way, what would be your dream “collaboration” job (working with other composers or musicians)? They could be living or dead, Japanese or foreign, related to game music or not related.

Yoko Shimomura: This is difficult… I love classical music, so I would love to ask Ravel to orchestrate my music, Rachmaninov to play the piano, and other composers like that, if I could ask.

RPGFan: What kind of music do you listen to? What are some of your favorite artists or groups?

Yoko Shimomura: Well, this is another difficult question. Recently I try not to stick to listening to my favorite artists, and I try listening to various genres of music. I look for CDs of the music I hear when I’m out and about. I love Latin and Spanish music, so I often listen to compilation albums in those genres.

RPGFan: Are there any genres/styles of music that you have not used that you would like to try in the future? Any that that you think aren’t used enough in game soundtracks?

Yoko Shimomura: I mentioned this in the last question – I love Latin and Spanish music, so I’ve always wanted to try those genres. Actually, there have been more opportunities to try them recently. Regardless of what styles or genres they are, I would like to pursue anything that I would enjoy working with.

[As for under-utilized styles] Hardcore Latin music – something that would make me feel excited and make me want to go crazy (laugh). I could go with Tango, Gypsy-like music, bright samba, mellow bossa nova.

RPGFan: Do you play any of the finished games that you’ve composed for?

Yoko Shimomura: Yes, I do play them, although I can’t finish most of them because I’m so busy. Of course I play them when I am writing music for them. Thank you so much.

RPGFan would like to thank Shimomura-san for her time and her gracious answers to our questions. We would also like to thank Shota Nakama for his assistance in translating from the original Japanese. Shota is a Japanese-born guitarist and the founder of the Video Game Orchestra.