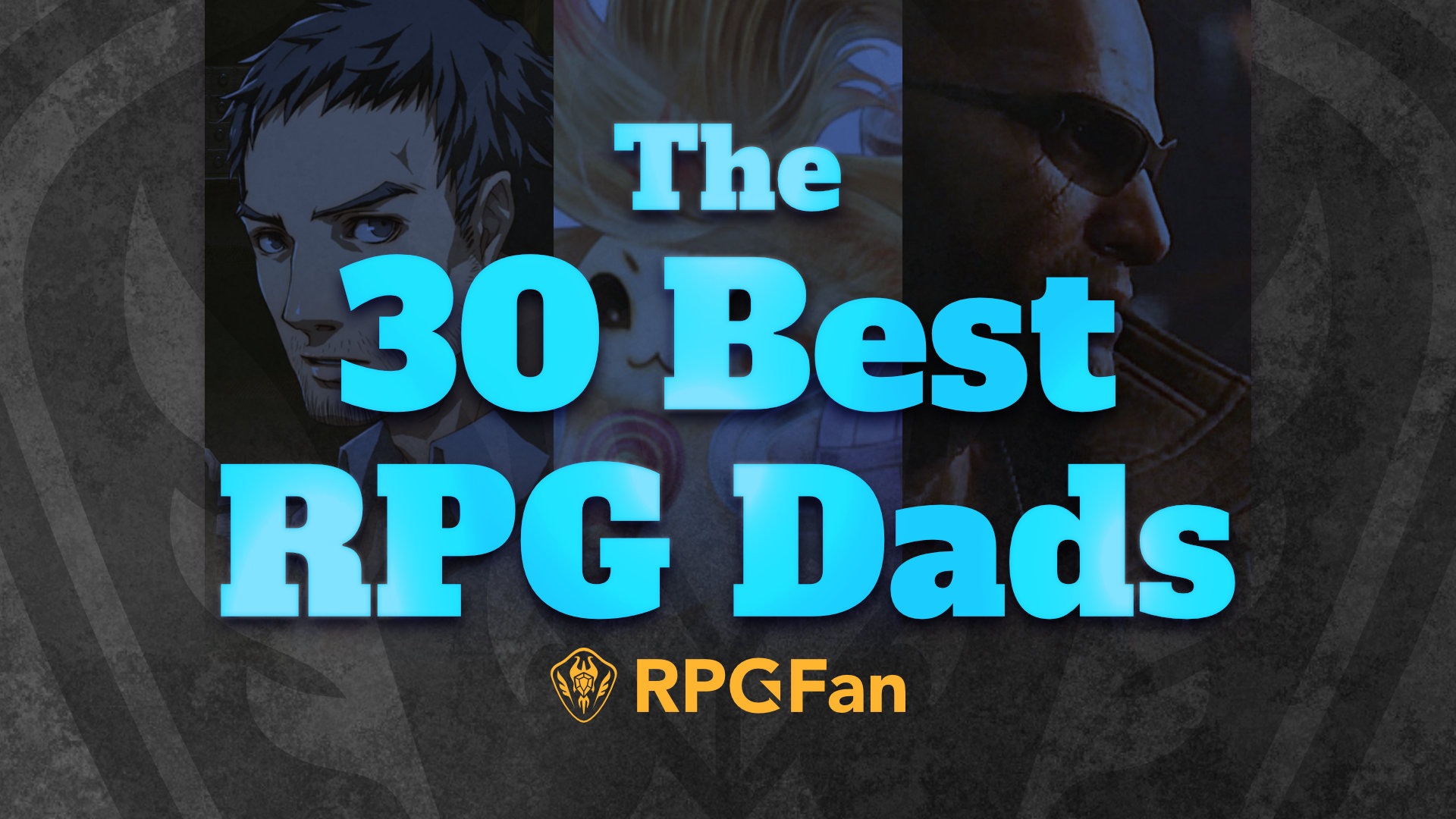 Father’s Day is when we give thanks to all the great dads out there, and why should it be any different when it comes to our favourite fictional fathers? Here at the RPGFam, we’d like to celebrate who who feel are the 30 Best RPG Dads, whether they’ve inspired us to save the world, watch over us from the shadows, or have passed on their weapons of legend for us to wield against evil.

See the first ten below, with two additional pages of the best RPG dads on subsequent pages.

[Editor’s Note: This feature was originally published on June 16, 2019, but we wanted to re-share it in 2021 since it had been offline for most of a year.]

You might not expect the barrel-chested, gun-armed, gruff-sounding leader of eco-terrorist group AVALANCHE to be a great dad, but if there’s one reason Barret fights for the planet, it’s his daughter Marlene. No one is more precious to him than his own adopted kin, and he’s willing to put it all on the line to protect her smile.

When he’s not hunting the great arcwhale Rhaknam, Drachma plays surrogate father to the Blue Rogues, Vyse, Aika, and Fina. He’s only got one eye, but he makes sure to keep it fixed on any danger that could run afoul of his skyfaring family. Having been a parent and suffered the loss of a child, he’s often standoffish and gruff, but underneath the grizzled exterior Drachma truly and deeply cares for those crazy kids out to save the world.

Nier is easily one of the most devoted video game dads to exist. He’s a man who gives everything to look after his sick daughter, Yonah, bringing her whatever she wants while trying to find a cure for her disease, even partnering up with a sentient magical book. His gruff exterior hides a much softer side, but when Yonah’s life is on the line, Nier’s power and determination to save her life breaks through. As a dedicated and protective father, it’s hard to compare to Nier.

He’s just a telephone, but Ness’ dad is always there to make sure you’re doing fine. He’s a busy, absent father, but he makes time to ensure that saving the world isn’t causing you to lose sleep or get too stressed out. He also makes sure your wallet stays fat with your allowance, because how else are you going to afford a nice burger after beating up a Mighty Bitey Snake?

Galuf is a reliable amnesiac goofball who is at least triple the age of the other Final Fantasy V protagonists, but he is also a supportive father figure to Bartz, Faris, and Lenna, whose parents are either dead or missing. However, it’s Galuf’s role as a grandfather to Krile that makes him a worthy member of our list of dads. His love for his granddaughter causes his memories to return, and his love of Krile, Bartz, Faris, and Lenna results in Galuf giving his life to thwart ExDeath’s dark plans. And in passing down his level and job mastery to Krile, he leaves his beloved granddaughter a worthy inheritance.

Beyond his brawling prowess, dragon-like energy, and natural leadership abilities, Kiryu Kazuma is commendable for being one of the greatest fictional fathers in all of gaming history. Though he doesn’t have any biological offspring, Kiryu is a father to many, having played a crucial role in the upbringing of people like Daigo Dojima, Haruka Sawamura, and the eight orphans who call Morning Glory Orphanage their home. His past as the fourth chairman of the Tojo Clan and his legacy as the legendary Dragon of Dojima often attempt to get in the way of his personal life, but he never shies away from his paternal duties, often solving his problems the best way he knows how ‐ with sheer brute force.

Over the decades, RPGs in general and maybe Dragon Quest in particular have the troubling trend of fathers giving their lives to save their children, with none more memorable than Pankraz of Dragon Quest V. The first third of DQV presents Pankraz as a noble figure, loved by all and completely outmatching any enemy you encounter in the game (he’s past level 30 while the hero begins at level 1). However, when our hero is held hostage by demons, Pankraz stoically takes a beating without fighting back, and the hero watches his undefeated dad’s HP fall to 1 in battle. It’s heartbreaking. The Hero survives to be a husband, a father, and the successor to Pankraz’s kingdom of Gotha, but it would all be for naught without Pankraz’s memorable sacrifice. Never forget.

Among a sea of youthful pink-haired characters and boyband-member lookalikes, Sazh is the voice of maturity and wisdom, with a sense of humor and an excellent fashion sense to boot. He’s also a single dad to an adorable son named Dajh and an equally adorable chocobo chick. While Sazh and Dajh’s storyline ultimately came to a happy conclusion in the original Final Fantasy XIII, it was definitely among the most heartbreaking and memorable in the game.

Cassius Bright (Legend of Heroes: Trails in the Sky series)

Cassius Bright is such a virtuous character that he can probably only exist in fiction. He embodies the highest martial ideals by being one of the most renowned warriors on the entire continent of Zemuria, but he also possesses a kind and gentle nature. He has an impeccable professional reputation as one of the few Bracers (AKA civil protectors) to earn the guild’s highest rank, yet he’s a stable and attentive single father to his daughter Estelle and his adopted son Joshua who, by the way, was a child assassin who tried to kill Cassius. It takes a remarkable individual to take in the person who tried to murder them, and Cassius Bright is nothing if not remarkable.

In a game where people are betraying each other left and right, the one pair you feel will always stick together is Tenmyouji and his adopted child Quark. Quark refers to Tenmyouji as “grandpa,” but having adopted and raised Quark alone in an extremely unforgiving environment, Tenmyouji functions as both father and grandfather. His jokes truly do approach “dad” levels throughout the Nonary Games, too. Because of his age and their harsh lives, Tenmyouji also has the unfortunate task of preparing Quark to live independently sooner rather than later. This does cause tension between them, but as the game progresses, you see growing understanding and how much the two care for each other. And Tenmyouji knows to take a moment and treat Quark to a root beer float. Aww.