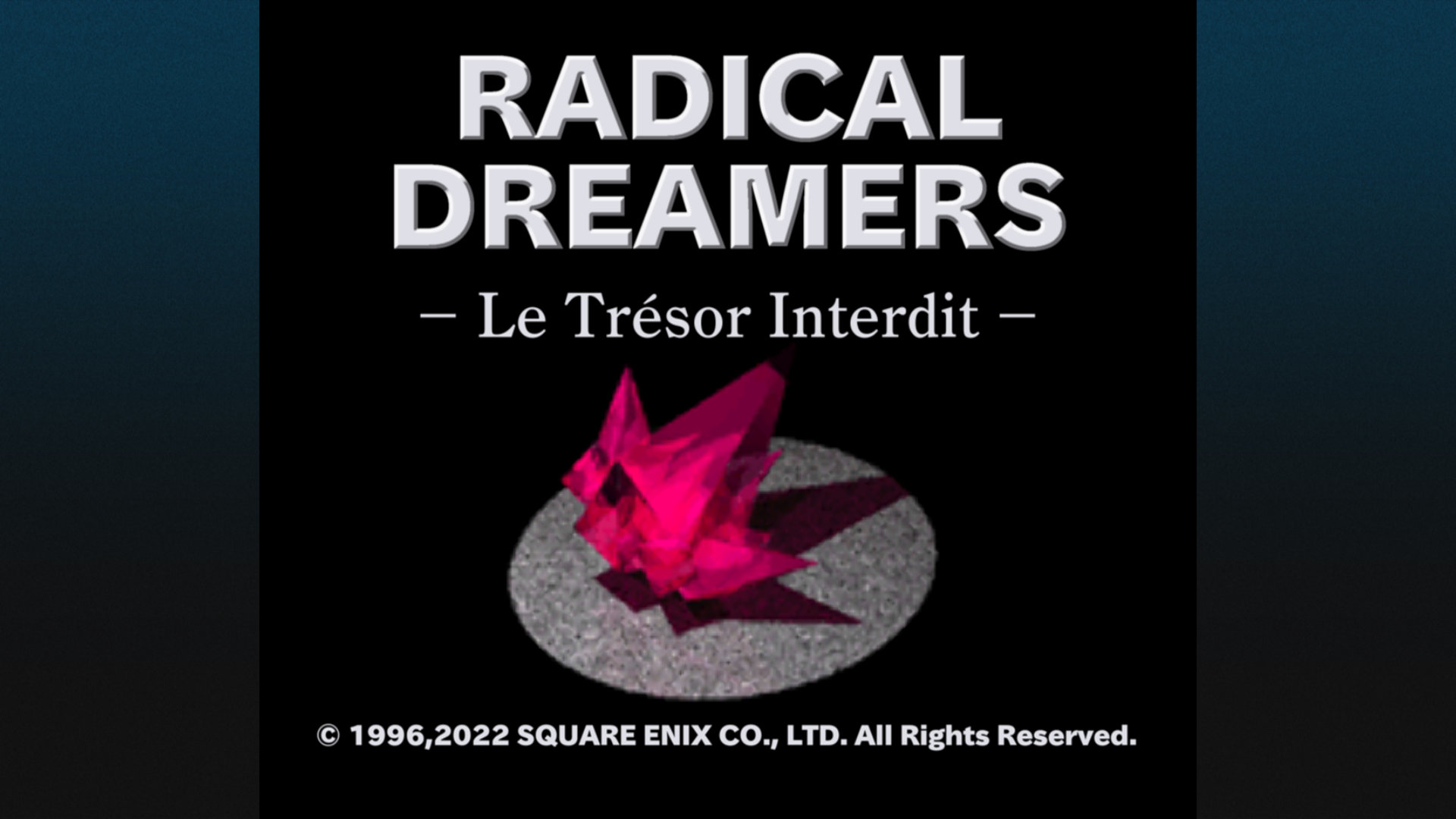 During the February 9th Nintendo Direct, Chrono Cross: The Radical Dreamers Edition was officially announced for an April 7th release. While a high-resolution remaster of Chrono Cross is reason enough to celebrate, the real surprise was that the package would include an official translation of Radical Dreamers – Le Trésor Interdit, the 1996 Japan-only follow-up to Chrono Trigger. Originally released for the Super Famicom’s Satellaview peripheral (another Japan-exclusive), the audio novel game has been unavailable through official channels since its broadcast period ceased that same year. Compounded by Radical Dreamers’ brief window of availability, the genre has always been a bit niche, so it’s unsurprising that there was never an official localization. Though the game was still playable on cartridges that had already downloaded it, it wouldn’t be until 2003 that Neo Demiforce’s English fan translation would be available.

Despite a rocky history with game preservation, Square Enix seems to have pulled out all the stops regarding its library going forward. Back when company president and chief executive Yosuke Matsuda confirmed plans to make their entire game library digitally available in 2018, it would have been safe to assume that meant licensing ports of existing regional releases. Coming off the heels of translations for Trials of Mana and several SaGa games, it seems Square Enix wishes to future-proof its classic titles with remastered visuals and has a vested interest in bringing many formerly untranslated titles stateside.  Radical Dreamers stands out among its peers for having had such limited availability, but it has such strong ties to its source material from Chrono Trigger that make it all the more fascinating a case.

Radical Dreamers shares a handful of story beats with its successor. The entirety of the game’s plot takes place in Viper Manor, an area that only encompasses a brief part of Chrono Cross‘ early story. Dreamers follows Serge, Kid, and Magil’s search for the Frozen Flame, an object of significance in the follow-up as well. Unlike in Cross, the cast is small and focused, which allows for better character building. The most notable difference is that Serge is not a mute protagonist in Dreamers; he has a defined personality, and the player is privy to some of his inner thoughts, such as his crush on Kid.

Not just Serge, but each of the characters that would later be included in Chrono Cross seem to be a bit more fleshed out, even if their roles and identities may have changed in the transition. One exception is Magil from Radical Dreamers, who became Guile in Cross. While his role is similar in that he is one of three possible characters who can escort Serge and Kid into Viper Manor, he was reduced to a filler character with his entire personality stripped away. These differences and similarities are even accounted for in a late-game dungeon in Cross, where the events of Dreamers are revealed to have actually occurred in an alternate dimension. Without both games’ contexts, an important piece of lore connecting the two and Chrono Trigger is overlooked.

What is lost when a game is forgotten and relegated to the past? It’s a perfect question for a series based on time travel and alternate dimensions. In an interview for Chrono Cross’ Ultimania guide, director Masato Kato said of its ending, “I thought that was the perfect material to use to give meaning to a parallel world. In each independent parallel world there would be respective developing stories,” adding that the intention was for players to transpose Serge’s story upon their own lives and think about the reality of their own world.

Likewise, when developing Radical Dreamers, there was a very definite purpose in its creation. Kato felt that some of the business in Chrono Trigger was left unfinished, particularly the question of what happened to Schala. While production deadlines contributed to Kato considering Radical Dreamers incomplete, it did contribute to Chrono Cross coming into existence as an attempt to do that story justice. Square Enix didn’t have to include the audio novel in a bundle with Chrono Cross for The Radical Dreamers Edition to be a success, but their choice to do so is noteworthy. Japan’s 1999 re-release of Chrono Trigger on PS1 was originally meant to include Radical Dreamers before being nixed by Kato, who felt that he didn’t accomplish his goals with the project.

Where the preservation of video games is concerned, this is a significant step in the right direction. What we lose when a game is not preserved isn’t just the experience of playing it but the intentions of those who created it. Perhaps Radical Dreamers has been rendered unnecessary by the existence of Chrono Cross, but as a stepping stone in that story coming to fruition, it is no less significant. The goals that the developers wanted to achieve and what ideas they wanted to share with players is no less significant.