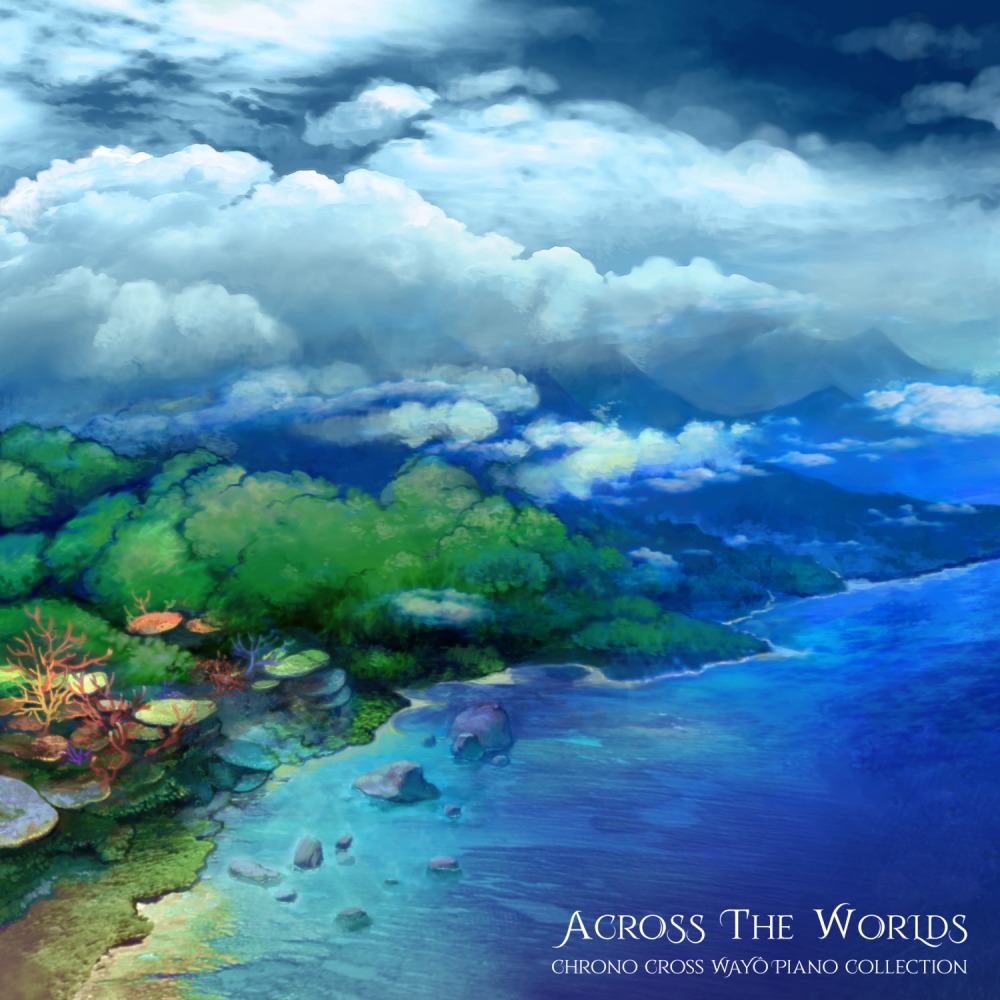 I waited twenty years for this day, and all I got was this strange, subversive, and fantastic album!

Many times in many reviews and commentaries, I have lamented Square Enix’s general lack of support for Chrono Cross, specifically the incredible soundtrack by Yasunori Mitsuda. While fan arrangements have been released over the years with relatively consistent quality (see Parallelus, for example), Square Enix has only recently gotten on board, with a Chrono Trigger/Cross combination arrange album in 2015 called To Far Away Times and an orchestral arrangement album in 2019.

Apparently, however, Square Enix Music was not interested in producing a piano solo album. Instead, musicians who have regularly worked with Square Enix banded together for a crowdfunded project produced and published by the European label Wayô Records, entitled Across the Worlds. Accomplished pianist Benyamin Nuss was tasked to tackle high-concept arrangements from Masashi Hamauzu (longtime composer and arranger on high-profile Square Enix projects, including Final Fantasy XIII), Mariam Abounnasr (a prolific orchestral arranger whose works include the NieR and Chrono orchestral sets), and Akio Noguchi (Millennial Fair member who also worked on To Far Away Times).

With this much talent, and given the fantastic source material, you might think this piano collection is a surefire win. However, after listening to this album nearly fifty times, I am not certain I can recommend it to all Chrono Cross fans.

The key here is that phrase, “high concept.” If you are looking for vanilla transcriptions — easily digestible arrangements where melody comes first and foremost, that sort of thing — you have come to the wrong place. Each of the three arrangers working on this project have developed advanced, meandering, and nuanced arrangements, all of which match the sensibilities of the prodigious Nuss. Noguchi’s arrangements tend to stay the most connected to the core melody, particularly in “Fossil Valley” (07) and the absolutely perfect “Girl Who Stole the Stars” (13). Longtime Hamauzu fans will not be surprised by his impressionist approach to this album. His arrangements for “Shadow Forest” (04) and “The Frozen Flame” (15) turn the Mitsuda compositions into something that could very well fit with Hamauzu’s self-arranged piano work on SaGa Frontier 2, Final Fantasy X, or Final Fantasy XIII.

As for Abounnasr? Her consistently impressive orchestral arrangements show us her strengths. This does not mean she is weak when it comes to arranging for solo piano. What it does mean, however, is that she is an arranger who pays close attention to voicing and layering. Having Benyamin Nuss at the piano makes her challenging, multi-faceted arrangements come to life. The closest thing to a “simple” piece on the entire album is her arrangement for “Chronomantic,” which strongly states the melody up front, then later allows for significant variation embellishment.

Take a look at the tracklist, and you’ll find plenty of favorites to enjoy. However, I was disappointed with the “Medley” tracks, especially since I wanted the same fleshed-out, high-concept treatment for certain songs in those medleys. The “Battle Medley” and “Another World Medley” are two tracks I’d have preferred be broken into separate arrangements, spliced across the album. In other words, considering the high-concept approach this album takes, I feel like medleys make less sense than the close attention given to individual pieces.

And then, as always, there is the problem of track selection. Nobody is going to get everything they want. Granted, I got most of what I wanted in this tracklist (though some of it got buried in those darn medleys!). But if I had been in charge, there would be full piano arrangements of “Earth Dragon Isle,” “Bound by Fate,” “Peril,” and “The Sea of Eden.”

That being said, I do not look a gift horse in the mouth, even a crowdfunded one — and yes, I chose to back this project within days of it being announced! From a song selection standpoint, it still met most of my expectations, and it surprised me with arrangements of source material I’d nearly forgotten to include in my personal wish list (here’s looking at you, “Fossil Valley”). From an arrangement standpoint, the healthy mix of Hamauzu’s impressionist vibes and densely layered arrangements from Abounnasr and Noguchi grants you the opportunity to slowly parse, digest, and deconstruct each piece over multiple listens. As for performance, Nuss knows how to bring the heat when needed and still allow space for soft expression as well.

And finally, as I hinted at earlier, there is “The Girl Who Stole the Stars.” Good old Kid. She didn’t just steal the stars. She eternally steals the show and any album her musical theme appears on as well. I wasn’t lying about how many times I’ve listened to this entire album, puzzling over how to describe it in a review. But this one track? I’ve listened to it over 300 times, which is unsurprising. The source material alone makes it worth it, every time. Thank you, Noguchi and Nuss, for absolutely nailing it with this one. I’ve shed countless tears while listening to this track.

Fans who want to pick up this album can only do so digitally. The CD and vinyl prints appear to be reserved only for Kickstarter backers, at least for the time being. Sheet music has not been published separately for retail release yet, though Wayô Records has stated it is in the works. If you want an opportunity to support game music, Chrono Cross, or the specialty work of publishers like Wayô Records, you might want to purchase this album. Just consider adjusting your expectations first. Comparing Across the Worlds to most any Final Fantasy piano collection would be folly. It’s not a matter of better or worse; it’s just an entirely different experience. Take a deep breath, clear your head, and enjoy.