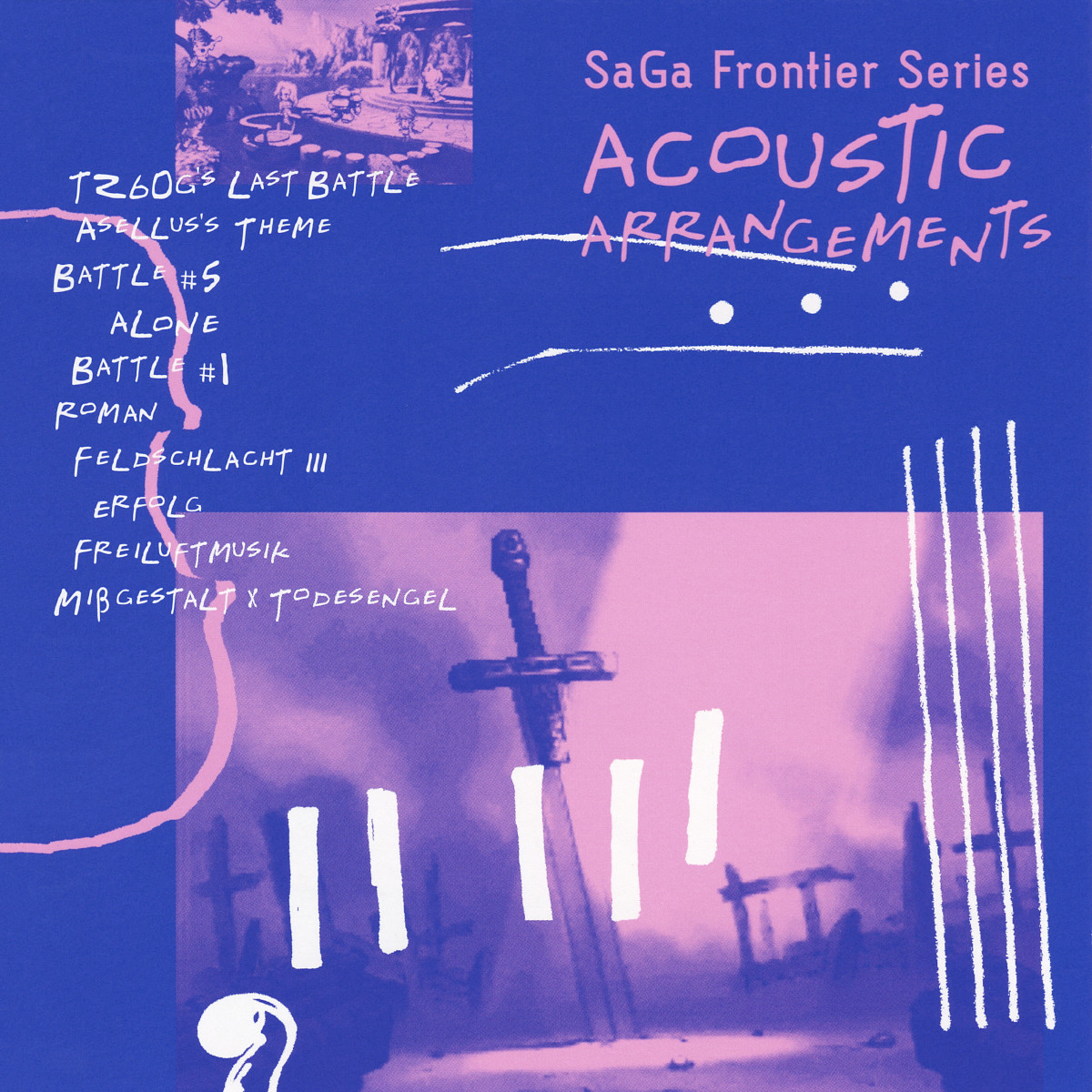 SaGa Frontier Series Acoustic Arrangements marks the third in Atsuki Yoshida’s ambitious “Acoustic Arrangements” series for Square Enix Music. And it is a strange entry indeed, as it celebrates the SaGa Frontier Series. I don’t know about you, but I have never heard this duology referred to in this manner prior to this CD release. As many fans know, these two games couldn’t be more different. Key development members switched from the first game to the second, including series composer Kenji Ito taking a rest so Masashi Hamauzu could take the mantle for SaGa Frontier 2. Attempting to bring a unified approach to these two titles, of all the titles in the larger SaGa franchise, may well be a fool’s errand. Or maybe it was something done intentionally after the release of SaGa Frontier Remastered (and rumors of a pending SF2 remaster).

In any case, Yoshida and friends took to work arranging five tracks from each of the SaGa Frontier titles for a total of ten new “acoustic” versions for fans to enjoy. For those wondering what this generic “acoustic” label entails musically, check out our review for the first album in the series, which focused entirely on early Square Enix titles.

SaGa Frontier Series Acoustic Arrangements opens with a surprising, powerful choice: “Last Battle -T260G-,” arranged by Kenta Higashiohji. This piano and strings arrangement makes plentiful use of pizzicato and other extended techniques that allow each instrument to become just as percussive as they are tonal. The performance here is shocking: the kind of thing I had always wanted for this song, but could never have imagined myself. Every performer on this one is amazing, but I have to give an extra nod to pianist Mariko Taguchi. What a whirlwind!

The opposing bookend to SaGa Frontier Series Acoustic Arrangements also sports some great final battle music. I was not surprised to see the final battle themes “Mißgestalt” and “Todesengel” on this album, but I was surprised to hear them as a medley arranged by one of my favorite people in the commercial music scene today: Kevin Penkin. Penkin made a name for himself at a young age, having composed for visual novels and TV anime as early as age 20. His most recent work as a composer was the complete soundtrack for the stylish genre-defying adventure game Necrobarista. But on the arrangement side, Penkin has always known his way around orchestra and chamber music. For this contribution, Penkin pairs a string quartet (foregoing a second violin and replacing it with a contrabass) with a woodwind trio. Except, in this case, the wind trio is three separate recordings from the same performer, Misaki Hatori. The winds do an incredible job holding melody when the strings are frantically working to fill out the void of what we would expect to be much larger ensembles. Since “Mißgestalt” includes the game’s iconic main theme as a motif, Penkin appears to have had a great time trading that classic melody across each instrument while working the structure of “Todesengel” around it all, creating a true fusion rather than a linear medley of the musical themes. This arrangement is equally emotional and cerebral, and I absolutely love it.

While I could speak at length about all ten arrangements, I’ll say that I don’t think there are any “misses” here in terms of opportunity. The quality of the arrangements are solid, and my overall satisfaction with SaGa Frontier Series Acoustic Arrangements is high. I want to note two other tracks that hold up as especially enjoyable from my perspective. First is track 4, “ALONE” (the Bio Research Lab music), arranged by Shingo Nishimura. I called special attention to the orchestral arrangement of “ALONE” for Orchestral SaGa Live Disc, as it was a powerful arrangement. However, it was also a relatively “safe” arrangement. On this album, Nishimura dares to play with tempo and time signature, adding so much decorative flourish there are times that the song itself seems lost to all the changes for a moment or two before coming back together. This arrangement is daring and smart.

The other especially impressive track is Atsuki Yoshida’s own arrangement of “Freiluftmusik” (track 9). From start to finish, while the basic form of Hamauzu’s airy melody is maintained, Yoshida uses this one as an excuse to go full hoe-down, a la “A Settlement in the Red Bluffs” on the Octopath Traveler Blu-ray concert. Atsuki Yoshida has never been afraid to think of his violin as a fiddle, and a-fiddlin’ he goes on this one!

For SaGa lovers, SaGa Frontier Series Acoustic Arrangements is unlike anything in the extensive catalogue of arrange albums out there. However, I think fans of Square Enix arrange albums writ large will continue to find high-quality arrangements of this style in the future, so long as Atsuki Yoshida is willing to lead the charge. I can’t wait to see what’s next!