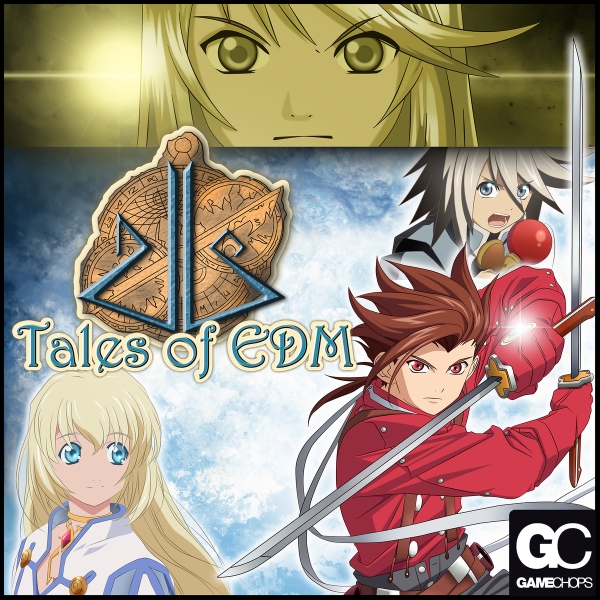 Tales of Symphonia was a fine RPG that pretty much did everything right. I remember the lovely visuals, the quality voice acting, the solid storytelling, and the thoroughly enjoyable gameplay. Unfortunately, I don’t remember anything about the game’s music. The soundtrack was inoffensive, but not at all memorable. This is precisely why I wanted to listen to GameChops’ Tales of EDM EP featuring dubstep remixes by DJ Jo. A lot of people dislike dubstep because they think it’s dissonant, but I could argue that the sound of distorted electric guitar had that same effect when it was first introduced and now it’s a big part of the musical lexicon in pop styles as well as rock. Regardless, DJ Jo has taken four pieces of music I could not recall from the game and breathed amazing new life into them.

Tales of EDM consists of four tracks that get progressively better throughout its duration. The first track, “Beat the Angel,” is a mid-tempo piece that starts out melodically before the heavy dubstep pops in to say “hi.” The remainder of the piece melds the melody with the dubstep noise in a pleasing way. The dubstep noise takes the role of the rhythm guitar playing a riff while the lead is layered on top of it, like during the guitar solo section of a rock or metal song.

I really liked the melody in the second track, “End of a Thought,” and the occasional use of voice clips to punctuate transitions was a nice touch. The chord progressions during the dubstep sections were nicely chosen, reminding me more of distorted guitars playing melodies rather than one-chord “chugga-chugga” crunch breakdowns.

“Fatalize,” the third song, started out like an old school Megami Tensei dungeon theme before going into the high flying melody prevalent throughout the track. I liked how the dubstep noise emulated turntable scratching and enjoyed the elements of trance and eurobeat in this song as well. This dynamic track with its varying styles and tempo changes was easily my second favorite on this EP.

“Fighting of the Spirit,” the fourth and final track was easily my favorite. Its uptempo parts were easily some of the fastest on this EP, but always slowed down to comfortable speeds before getting too frantic. It also had the least heavy-handed dubstep components and was the most melodic piece throughout its duration.

None of the tracks felt long and none of them overstayed their welcome. Each track also had good variation and well-placed changes that kept things fresh to my ears. If you have an aversion to dubstep and its ilk, this EP may not change your mind. However, I have to give DJ Jo a lot of credit for taking tracks from Tales of Symphonia‘s plain-vanilla soundtrack and remixing them into exciting pieces — in a musical genre I have mixed feelings about, no less! That’s no mean feat, andTales of EDM is easily one of my most pleasant musical surprises of 2013.