...the music is probably the best and most consistent part of the series, so it's only right that we get to celebrate this musical legacy by hearing and interacting with the songs in a new way. And that's exactly what Kingdom Hearts Melody of Memory wants us to do. 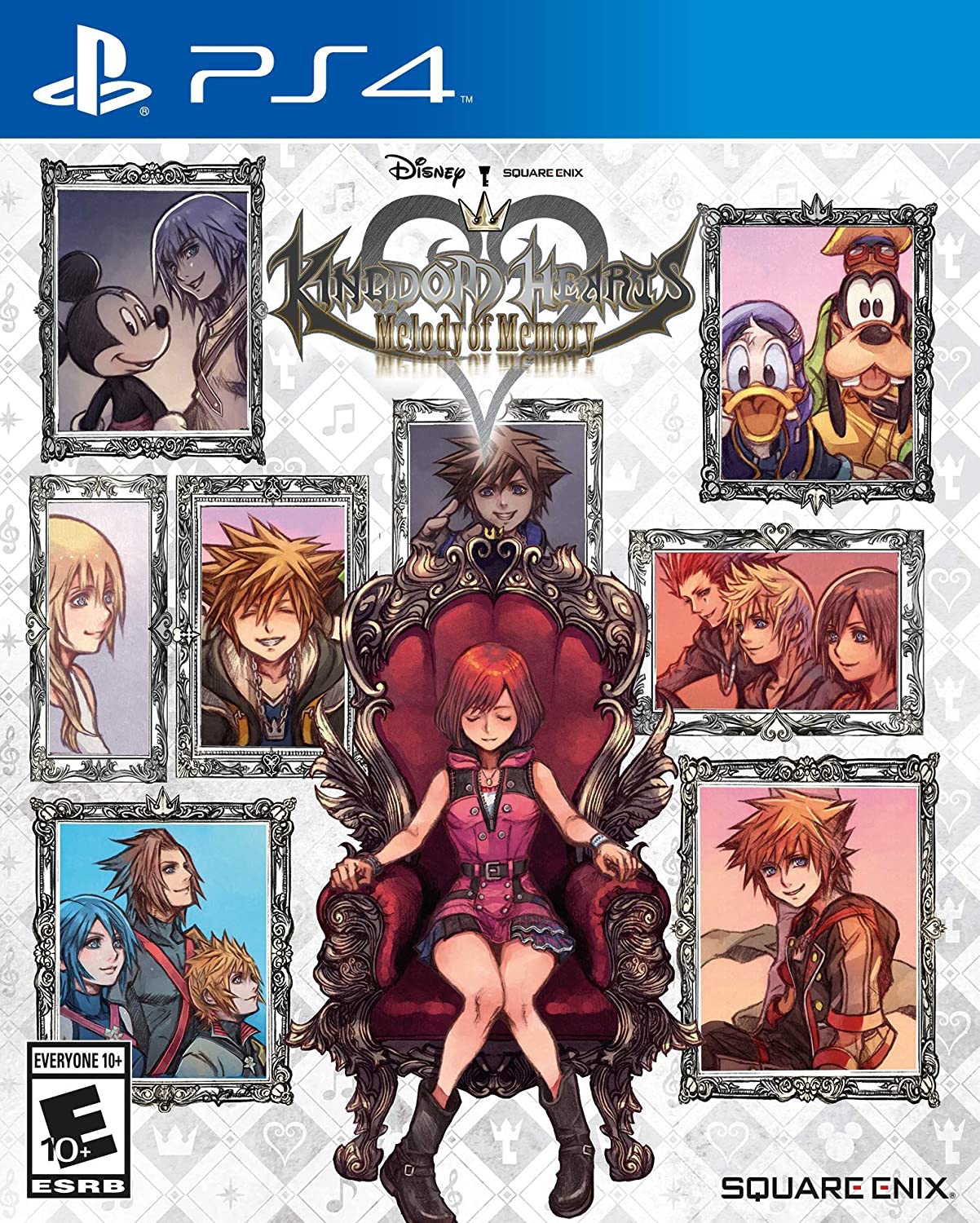 We all know just how powerful a good video game soundtrack can be. It’s almost impossible for me to distance the first piano note of “Aerith’s Theme” from the visual of the Holy Materia hitting the ground and clinking in Final Fantasy VII, nor can I hear “Chrono Cross -Scars of Time-” without seeing the opening words of Chrono Cross while the pages of that old, musty book on the desk open out. Nothing else invokes memories like music, and ever since Theatrhythm Final Fantasy was released, many of us have clamoured for more video game music rhythm games. Kingdom Hearts has always been a natural and deserving pick. After all, the music is probably the best and most consistent part of the series, so it’s only right to celebrate this musical legacy by hearing and interacting with the songs in a new way. And that’s exactly what Kingdom Hearts Melody of Memory wants us to do.

Melody of Memory is one big recap of the entire series told by Kairi as she reflects on the events of the Dark Seeker Saga. Throughout the game’s “story mode,” called World Tour, you unlock short vignettes that are a thread-bare retelling of the series with Kairi’s narration. World Tour is where you start off spending most of your time. This mode sets many of the series’ worlds and key battles on a Gummi Ship-style map. Every world has one or two songs to play on it, and every song has three missions which, if achieved, grant you stars that allow you to progress further on the map and reach the end. You can also adjust the difficulty of each song to Beginner, Standard, or Proud mode. During the music stages, you can pick up items (like potions and experience boosts), synthesis materials that you can use to create more items, collectable profile cards, or even unlockable songs.

The story part of the game feels tacked on, especially considering that for many — myself included — this could have been Kairi’s chance to shine. I had tempered my expectations towards launch, especially as Tetsuya Nomura confirmed in an interview with Famitsu that Kairi’s addition to the game was a late inclusion, but getting nothing until the last hour of the game felt like a slap in the face. Kairi’s involvement has always felt like an afterthought, but the series’ inability to be consistent with its female cast is grating. Don’t go in expecting much, but I will say there’s a little bit more breadcrumbing for the future of the series, which left me curious and maybe even a bit excited.

Progressing through World Tour to advance the story is incredibly frustrating, too. While you don’t need to complete every world/song to make progress in the story, you have to complete many of each world’s missions, which vary from beating the song on Proud mode without using any items to getting a high chain of perfect hits. The first of these comes up very frequently, which makes the item system seem superfluous. You can use it elsewhere in the game, but why implement an RPG system like this and discourage someone from using items? And gating progression like this can really drag the story mode out depending on your skill level.

Perhaps more annoying is that to get the most out of the Track Selection mode, you do have to play through every song and stage in World Tour to play them. That’s on top of all of the songs you need to synthesise to get the full tracklist. And the complete tracklist is great, even if there are some fairly significant omissions from Kingdom Hearts III (the two games were apparently in development at the same time). But with World Tour’s nature as a lot of Disney worlds, these arrangements don’t hit the same highs as the series’ classic songs like “The Other Promise” or “Hollow Bastion.”

The bulk of this game is spent playing through the various music stages. There are three different types: Field Battle, the most common, where you fight Heartless and the like and run across a stage; Boss Battle, a fight staged against a major foe where your timed notes let you dodge special attacks; and Memory Dives, where all notes are controlled by using one face button and the two back shoulder buttons in order to time your hits with the beat of the song. In Field Battles, you can jump, glide, and unleash skills and spells too. The gameplay does a lovely job of feeling like a Kingdom Hearts game, especially in the Field Battles, where your characters run up the screen attacking enemies and using spells.

The difficulty and beauty of these games is mastering them, and Melody of Memory can certainly get tricky. I played most of the game in Standard or Proud mode, and I was actually quite surprised to see how the different note layouts were handled between difficulties. It actually felt like I was playing meaningfully different stages, but also improving and gaining the confidence to tackle the higher difficulties. Improving and practicing on Track Selection is where this game really shines for me, because I lost myself in the magic of the series’ music in whatever way I saw fit. This is also the only place you can change Style, which affects how many buttons you need to press. Normal is the standard, used in World Tour; One-button allows you to play with just a single button; and Performer adds extra buttons and enemies for more challenge.

The biggest adjustment I had to make was adapting to how busy the screen can get. Boss Battles in particular are egregious in this respect, as your characters run around in the background while attacking the boss on a bright, crisp background while the bar for your notes is faded and difficult to see. Luckily, there are only four bosses in the whole game; that means that most of the stages are Field Battles, which start to feel a bit repetitive. The visual variety is really lacking too, and while assets have been understandably reused, the Switch’s lower resolution and performance means many of the CGI cutscenes are a little blurry and sometimes jittery, which can be distracting, especially in a Boss or Memory Dive.

But there’s something that the frustrating gating, the busy and often lacklustre visuals, or the lack of any care for Kairi can’t take away from me: Kingdom Hearts is a series I’ve grown up with, and as complicated as I feel about it now, I can’t deny that it’s a series I have many strong memories of. “Roxas” not only reminds me of the sadness and uncertainty as Roxas ends his summer vacation in Kingdom Hearts II, but also my shy, uncertain teenage self. Likewise, “Rage Awakened” invokes the fight between Terra and Xehanort, but I felt the inner struggle I was going through while I played Birth By Sleep. Playing Melody of Memory was like opening a music box stuffed full of old photographs and notes from my old self. The memories aren’t all good, but they’re what make me me, and likewise, the music is what makes this series so special to so many.

For as messy as Kingdom Hearts is, for all of its flaws, the series has a lot of heart and emotion that’s been beautifully conveyed through the music over the years. With Melody of Memory, I got the chance to re-experience many of the tumultuous emotions that I’d felt since the beginning and reconcile them. This was a series I once adored and recently began to feel disenchanted with, but this game reminded me of joy I’d felt hearing each song for the first time over the years. And while the package could be better, and I wish I enjoyed playing it more, this feels like the only way to cap off the Dark Seeker Saga. Whether I’ll be back for the next Saga, I’m not sure, but Melody of Memory captures my journey with the series perfectly: we’ve had our ups and downs, but ultimately, Kingdom Hearts has been influential in my life, and I don’t regret seeing the series through.

It's a rhythm-based Kingdom Hearts game full of fantastic music, fun and challenging gameplay, a hint at the future.

Some blurry visuals on Switch, too much happening on-screen, progression gating, Kairi's arc still may as well be nonexistent.

It's never Simple and Clean with Kingdom Hearts, but Melody of Memory still manages to be a mostly-fun celebration of the series' music.