MazM: The Phantom of the Opera

I still found myself worrying about Christine’s physical and emotional health, as well as what the Phantom might be plotting to do to her next. 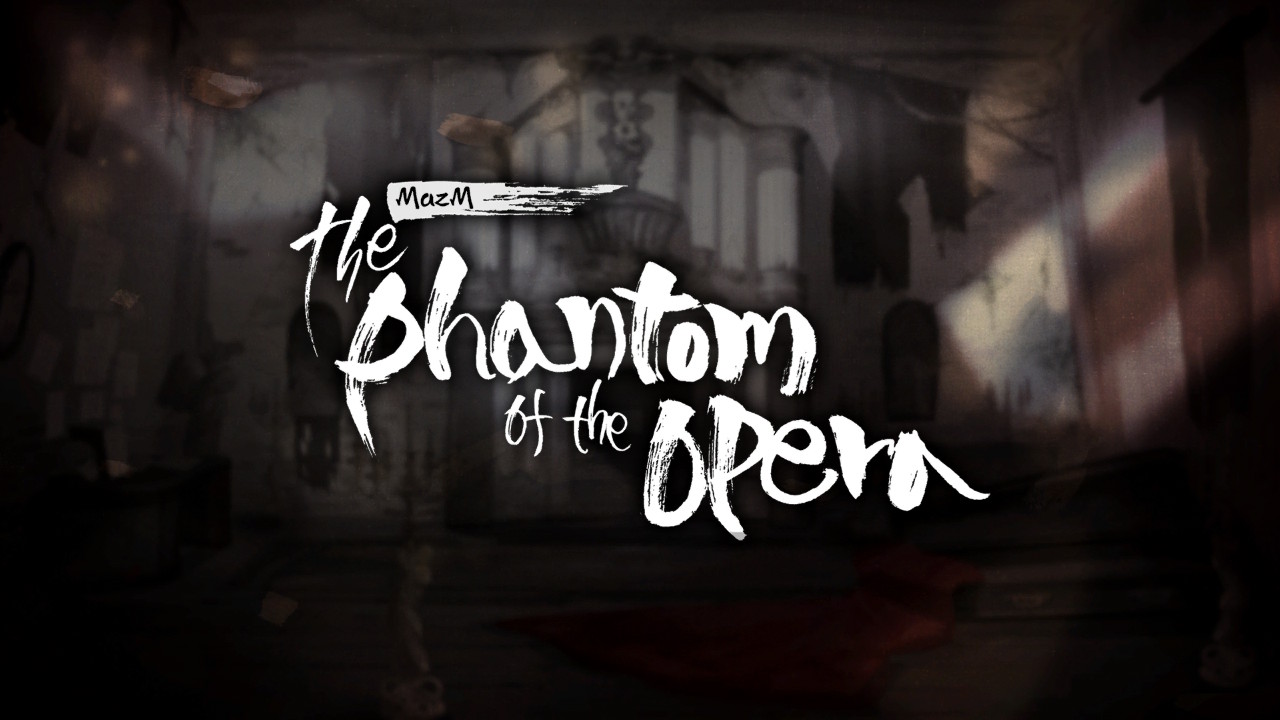 I was all set to write that MazM: The Phantom of the Opera would be the first game I’ve played based on a theater production I’ve seen. But South Korean developer Growing Seeds’ version of the classic story is instead based on the early 1900s novel, not the 1986 Andrew Lloyd Webber musical. While I’m still left waiting for the “Music of the Night” rhythm minigame I was hoping for, I did get to delve into the century-old story’s gothic stylings, with a stronger emphasis on horror than I was used to.

The Phantom of the Opera is, as you might have guessed, an adaptation of the Gaston Leroux book by the same name. In this lightly interactive, point-and-click visual novel, you explore your surroundings, talk to characters, and inspect items, but there aren’t any puzzles to solve. You take on the role of several of the story’s famed characters — including Christine, the opera singer, and Raoul, her wealthy, confused suitor — as they try to survive the titular Phantom, who terrorized the Paris Opera House in the late 19th century. Obviously, this is well-worn ground; aside from the essential musical, a quick check of Wikipedia reveals hundreds of books, movies, comics, etc. based on this story. So what’s one more? Though I can’t speak to the quality of any of those side works, Growing Seeds offers a visually and aurally attractive presentation of the classic story, with enough modern nuances on the narrative and its themes to justify its existence.

Most people have been introduced to The Phantom of the Opera through the Webber musical. While that version lightly acknowledges the Phantom’s obsessive, abusive relationship with Christine, it’s also kind of sexy, setting up a love triangle with Raoul. But in this game, the Phantom is purely a holy terror who keeps Christine under his thumb through gaslighting and a forced sense of obligation. At one point, Christine even tells a friend she hopes she can change him, a well-recognized notion in abuse dynamics. The narrative shapes the Phantom into as complete a character as possible, even making him sympathetic to a degree, but without excusing his monstrous behavior. Raoul isn’t given the hero treatment here, either. Though he isn’t murdering people, as the Phantom is, Raoul’s controlling approach toward wooing Christine is not far off from the Phantom’s. Considering his wealthy family background, Raoul comes off as spoiled, especially compared to the Phantom, whose upbringing was filled with misery and suffering.

The brightest star of the show is the sound design. Despite being about an opera house, there are no soaring operatic songs in Phantom of the Opera. The background music and effects drive the horror tone, with the sounds of plinking strings and dark melodies creating a growing unsettling feeling as the story slowly unravels. There’s one particularly unnerving audio effect with what sounds like a bunch of different bird noises smashed on top of one another. It all comes together with the imposing Phantom and his disturbing antics to strike an ominous mood. It’s not all a horror show, though. There are some nice period-style tunes and sparse piano pieces, some beautiful (if haunting) vocal arrangements, and a possibly anachronistic record scratch that accompanies jokes. Many of the sounds are recycled throughout the game, but they’re smartly placed to hit differently in a variety of moods. Despite being mostly wordless, the sound is super effective at driving the game’s direction.

The character designs feature period-appropriate attire, but some are quite extravagant, and their portraits are striking. Our opera-singing heroine has an eye-catching appearance that is a wonder of the cosmos. You’ve probably witnessed some of Square Enix’s ridiculous, gravity-defying hairstyles over the years, but you haven’t seen anything until you’ve gotten lost in the wonders of Christine’s body-length blonde hair that wraps around her like a robe, then descends into the midnight sky. Raoul and his brother look like fairly normal well-to-dos for the time, aside from their pinkish hair. The Phantom also has an original design, showing up decked out in black with a full, expressionless mask. This is not the suave version we are used to from the musical (or Gerard Butler), but rather a menacing figure who casts his shadow over the entire story. Sure, society is the real monster, but the Phantom is himself a monstrosity. The innocent-looking, chibi-style characters evoke sympathy, and the animations, while simple, entertainingly convey their outsized personalities.

The standout characters are Christine’s close friends, the dancers of the opera. Despite being Christine’s backup onstage, each gets their chance to shine. Future baroness Meg Giry, knife-wielding and upward-mobility hopeful Sorelli, and especially cat-loving, budding revolutionary Jammes are the life of the show. The points where they take the spotlight, showing their bravery and loyalty to Christine and everyone at the opera house, are among Phantom of the Opera’s most enjoyable moments.

But is there an actual game here? Well, sort of. I mentioned earlier that the game is lightly interactive, and even for a visual novel, player input is limited. Some of the interactive elements, like one where you follow button prompts to bash through a mirror in a desperate attempt to escape an enclosed room, let you experience the characters’ dread through their eyes. The most basic rhythm minigame where you’re trying to read a letter (French handwriting is the true horror, apparently) is so low-stakes. The Simon Says repeat-the-sequence segments are too uninvolved to be interesting but also difficult enough that they slow you down. Thankfully, the minigames only crop up occasionally, but they don’t improve the experience.

The minigames are the only “game-like” parts of Phantom of the Opera. Though the walking portions are set up like a point-and-click, your only task is to walk to the next person or item you need to interact with to advance the story, and your destination is usually obvious. There are occasionally points during dialogue where you can pick from two responses, but in most cases, there’s little difference between them besides maybe an extra scene at most. You can optionally collect green notes, which offer generally insightful tidbits about a range of topics, like character backstories or historical facts about the time period. You’ll find some of the notes on the way to your destination, but others are located painfully out of the way. Repeatedly exploring the same handful of rooms is made even more frustrating by long load times between screens, at least on the Switch. Also, the controller buttons feel sticky, and the interface seems made for mouse and keyboard anyway. Though I didn’t play the PC version, it’s probably superior.

Don’t mistake the lack of gameplay to mean there’s no intensity, though, especially about halfway through when the story heats up. Though I knew there was no “game over,” and I’d seen Phantom of the Opera enough to know how the tale ends, I still found myself worrying about Christine’s physical and emotional health, as well as what the Phantom might be plotting to do to her next. And because there are some differences from other versions of the story, I was worried about the fate of certain side characters, too. My concern came in part from the fact that outcomes were out of my control, much the same way Christine feels with the Phantom’s hooks in her (not literal hooks — he has other preferred tools for murder). It’s a testament to the quality of the narrative that it managed to create that level of tension, even though I had an inkling of how everything would end.

The finely detailed story is admittedly impressive and a nice modernized spin on the classic Phantom of the Opera tale. However, that detail takes a lot of time. In the 20-25 hours it takes to get through this game, you could read the original novel, catch the stage version, watch both the 2004 movie and the 1925 silent film, and still have hours to spare. The length isn’t necessarily a negative, but it could use a trim, as the story lingers a little too long on its themes. The characters have added complexity, but their traditionally simpler counterparts have worked just fine in the past, and brevity would have been appreciated.

I think some people would love an experience like this (sans minigames), where you just walk around, talk to people, maybe do a few interactive sequences for effect, and enjoy a narrative (that’s the MazM series’ goal), especially one presented with such an attractive style. In terms of gameplay depth, however, Phantom of the Opera makes other walking simulators feel like Dark Souls. It has nothing to do with this game, but I would have loved to see the eye-catching art paired with a deep SRPG-style system like Final Fantasy Tactics or at least something with more substance.

Overall, this is a pretty nice Phantom of the Opera presentation that digs deeper into the characters and story than other versions. If you’re looking for intricate gameplay, your princess is in another opera house. But if you’re interested in a different spin on an old story, or if you just hate reading books, this is a lovely but creepy multisensory production you can curl up with as if you’re diving into a familiar classic novel and biting your fingernails over the drama.

A horrific antagonist accompanied by impressively eerie sounds casts the Phantom of the Opera and its characters in a new light, making it worth the price of admission.