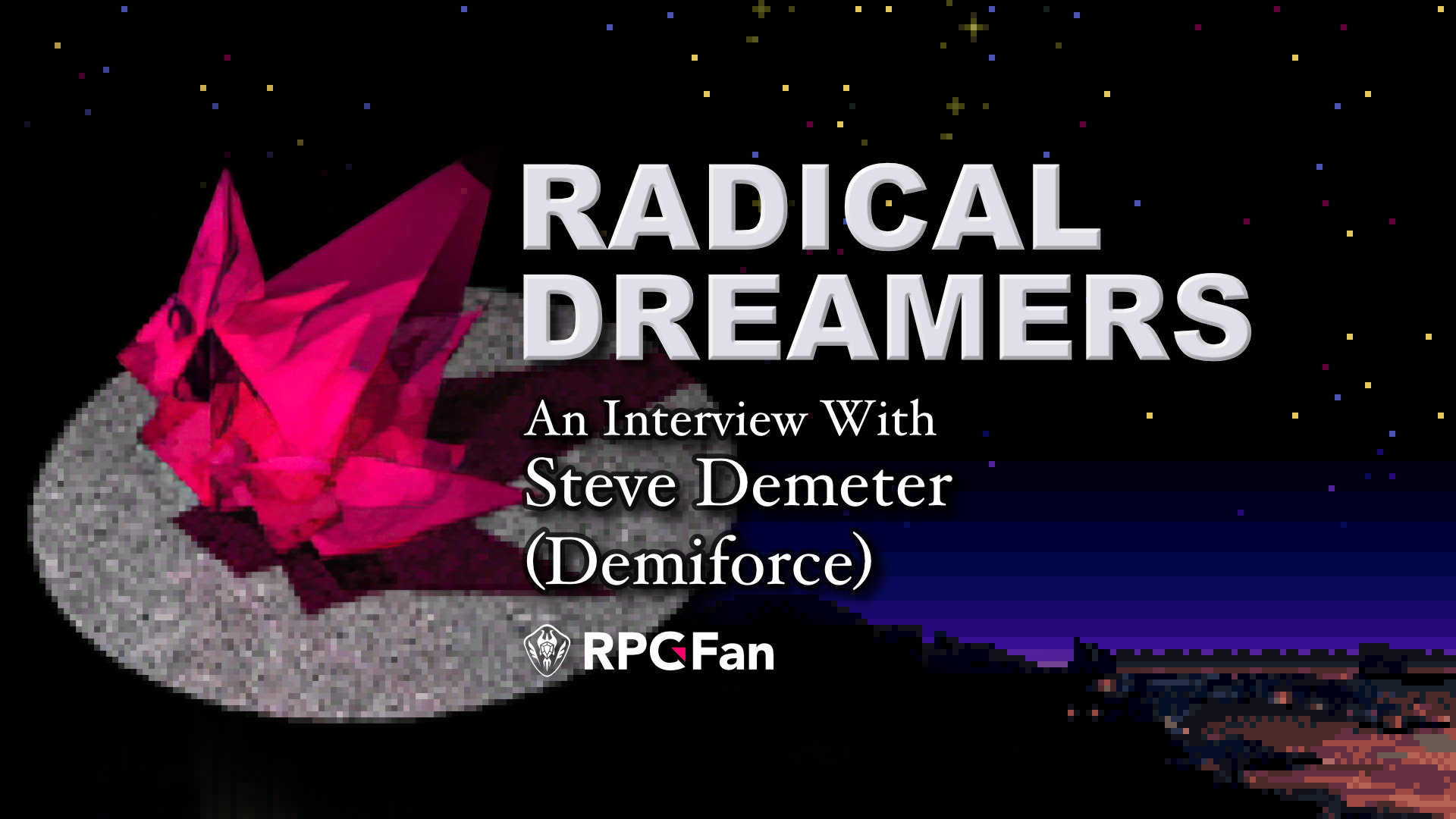 With the recent release of the Radical Dreamers Edition of Chrono Cross, Radical Dreamers is now more widely visible in the gaming world, not to mention more readily available to the target RPG fan audience. But long before that, there was the definitive fan translation in 2003 (long after the original limited window the game was available in 1996) by a devoted fan called Demiforce. Having an official version of this title is significant from a game preservation standpoint as well. We were lucky enough to catch up with Demiforce on this occasion and discuss the Chrono series, the official translation, and a bit about what he’s up to currently.

RPGFan: What made you choose Radical Dreamers for a project? We have tons of fan translations today, but back then, most of those were still not localized.

Steve: Good question! First, HUGE Chrono fan here. Beaten Chrono Trigger more times than I can count. Wanted to pay homage to the series the best I could. At the time, Chrono Cross had been released for a few years, and while there were rumors of a third game in the series, nothing had been officially announced.

At the time, there was a groundswell of attention regarding anything related to the IP: even this small text-based game released for the Satellaview. To my knowledge, it hadn’t been touched prior to my involvement because of [its] BS-X memory nuances and the sheer size of the [game’s] script (~700 pages)!

RPGFan: Having played it, I’d never have expected there to be THAT much text. That must have been a huge undertaking!

Steve: The first challenge worked itself out in time; emulators began to support the more exotic peripherals, which made playing the ROM a non-issue. Once I looked into the ROM, it became clear there was more than enough free space available to insert an English script with no size constraints.

It was a great opportunity! I had just graduated university with a Japanese degree and had spent some time living in Nagoya, so this was a real opportunity to test my skills. (That, and no one I asked wanted to undertake such a behemoth.)

RPGFan: That actually answers part of my next question. I was wondering how fluent in Japanese you already were when you began the project and if it was a skill you studied specifically for gaming purposes or not.

Steve: I would not say I’m fluent, especially now. I traveled to Japan with my boyfriend in 2018 and had difficulty doing much more than ordering dinner. I have my JLPT N3 if that helps shed light on an empirical bar of skill. At the time, I was conversant and could do a decent amount of translation thanks to my courseware, dictionaries, and friend circle. Main weapon in my tool belt was time. I was between jobs at the time and spent a good couple of months heads-down on the material. Translating, proofing, editing, rinse and repeat.

RPGFan: I did notice that the team for Radical Dreamers was a bit larger than what you usually see on these projects. Were those individuals part of that friend circle, and were there any particular parts of the project you struggled with that others were able to help on?

Steve: Of course. I can’t take all the credit, not by far. There were a number of folks involved on various assembly mods (Disnsquick, Madoka, CStrife, Radical R, and Dreamer_Nom). The scene at the time was very much a communal space; we were all on the same side of things, with the same goals.

On the translation side, same situation. MO, Loek Van Kooten, Datenshi, and Akujin were a huge help in validating some of the trickier parts of the localization. It was reference heavy and self-parodying at times, making some of the idioms tough to understand for a gaijin. We all wanted to do the best we could for the project, especially considering how serious the community took the work.

To wrap up, I have to say it’s a huge honor to be interviewed. Been reading RPGFan since day one. Appreciate all the quality work you do.

RPGFan: Thank you! One last question: How was your experience playing the official localization? Was anything done significantly different from your own localization that you agree or disagree with?

Steve: Firstly, I loved coming back to it after all these years. Really appreciate Square Enix “going there” and deciding to put money into an effort like this. Hopefully, it means there is renewed interest in the franchise, enough to possibly release a new game in the series. *fingers crossed*

As for the localization effort itself, I have to commend them. The localization accuracy is high and the prose comes across very eloquently. One point to mention: the original Japanese had some inconsistencies, such as the spelling of some locations like Regionna/Regiorra, and directional navigation within the manor. At the time, I felt this made the game more frustrating, so I decided to correct them even though it meant a less “authentic” translation. This new version, on the other hand, seems to have kept those inconsistencies intact. Not trying to make this version look lesser-than; just a different approach from one localization to another.

On the other hand, one area the official localization took a bit of creative license was to put the entire body of text in past tense. This was not done in the original Japanese, and I never thought to do it when I localized. To compare the two, I feel using present tense (“I attack the goblin”) comes across more immediate, as if it’s a conversation between the main character and the player. Using past tense (“I attacked the goblin”) makes it feel like the main character is recounting an old tale to an audience. Given that the prologue of this game depicts a book that the protagonist is reading from, I feel using past tense is a better fit. Kudos to the official localization team for making this choice.

RPGFan: Just wanted to thank you for your hard work bringing this to us back in the day, and for taking the time to discuss the experience!

Steve: Much appreciated! Have a great night.

Currently Steve is heading a project called Steam-on-Chromebooks that just made the rounds at GDC in an alpha build. If playing Steam in a portable format is of interest, then check it out and show some support!