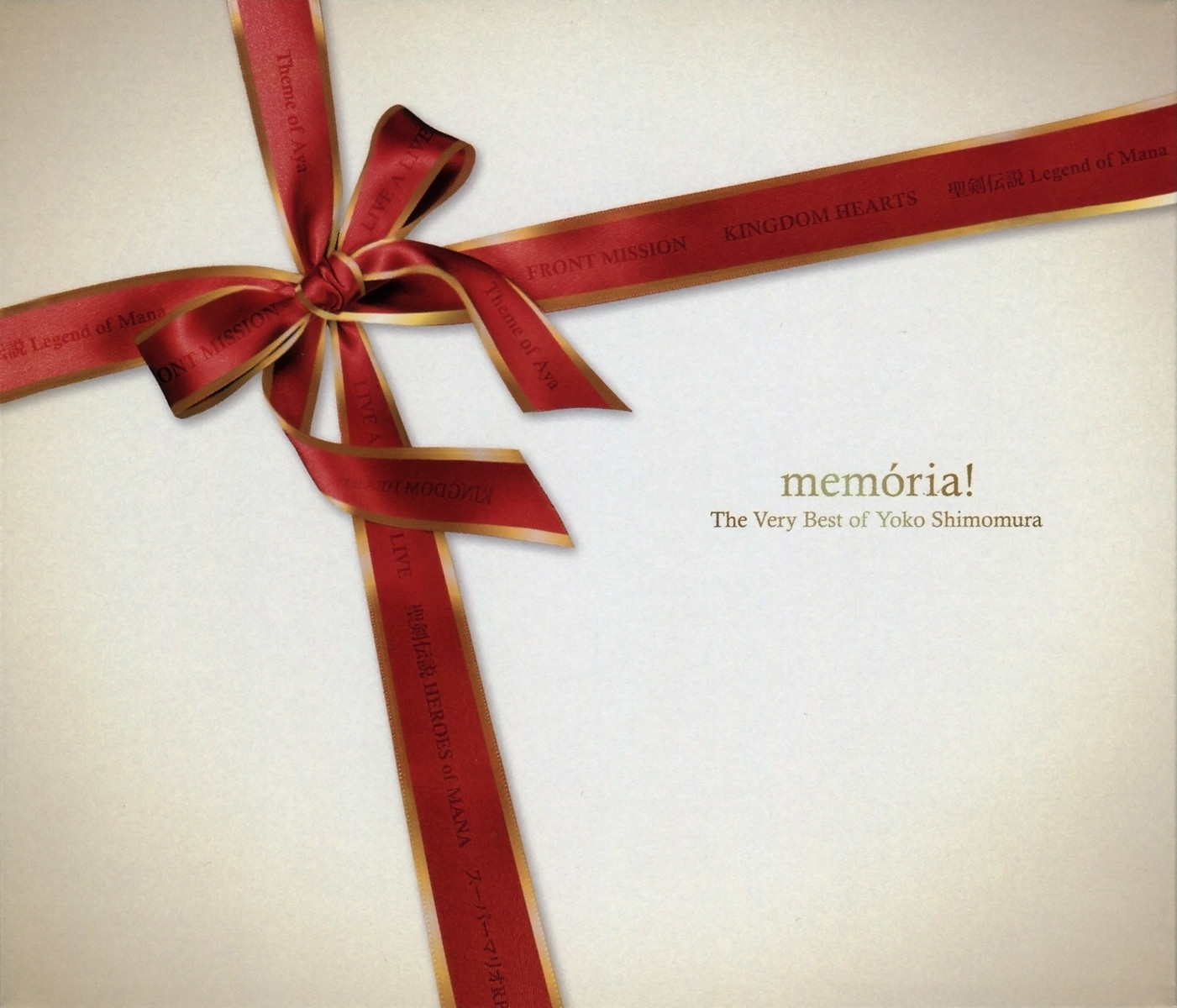 2008’s drammatica – The Very Best of Yoko Shimomura is one of my all-time most beloved albums. I’ve listened to it regularly since it debuted and hold each and every track on the disc in the highest regard. It shouldn’t come as a surprise, then, that memória! / The Very Best of Yoko Shimomura had some serious legwork ahead of it to live up to its fantastic predecessor in my mind.

Much like the recent Drag-on Dragoon 3 Original Soundtrack, this is a markedly different album than some might be expecting. There’s more variety to the kinds of sound on offer here than was found in its predecessor, and unsurprisingly, there are two additional arrangers on-hand. What this translates to is an album with a less consistent identity, but much greater breadth. For example, a track like “MEGALOMANIA,” from the lesser known Live A Live soundtrack, features upbeat synth-heavy beats with a fast-paced vocal delivery. While it may not seem quite as measured or dignified as some of the slower-paced tunes on the album, it’s an undoubtedly catchy song and one of the highlights of the album for its sheer catchiness.

“Pain the Universe” is another rocking synth track (and one of the best from the Legend of Mana OST) arranged by “MEGALOMANIA”‘s HIDEAWAYS. In this case, the original was stylistically quite different from the piano/violin-heavy tunes Shimomura is known for these days. As a result, though, the wailing guitars and heavy riffing of the arrangement are well-suited to capturing the essence of the original and translating what made it so wonderful.

It’s not all singing and rocking, though. The oft-arranged “Dearly Beloved” from Kingdom Hearts also makes an appearance. I was originally a bit apprehensive about this choice, since this tune has been covered so many times by various artists (including Shimomura herself). However, the arrangement wisely plays with the source a bit, incorporating some lovely new phrases and showcasing a fantastic performance besides. “Going Through the Flame ~ Dragon Killer Medley” from Legend of Mana is a full-bodied orchestral piece, and the track most evocative of the style of music featured on drammatica.

Perhaps in response to listener demand, Parasite Eve and Super Mario RPG also see representation here. “Beware the Forest’s Mushrooms” is as playful and curiosity-invoking as it ever was, showcasing the brilliance of the original composition through the arrangement. I couldn’t help but be reminded at times of the Wonderland theme from the Kingdom Hearts series as I listened. “A.Y.A.” takes the original song “Theme of Aya” and renders it brilliantly as a solo piano track. It’s perhaps a bit less foreboding than its source, but is undoubtedly more listenable as a result.

The last four tracks are pegged as a bonus: karaoke versions of Live A Live‘s “Kiss of Jealousy” and “MEGALOMANIA,” Final Fantasy XV‘s “OMNIS LACRIMA,” and “The Masked” from Demon’s Score, a mobile title featuring the work of many Square Enix-affiliated musicians. The karaoke tracks are a fun addition, but the other two deserve the most attention.

We’ve only had a few brief musical glimpses of what to expect from the yet-unreleased Final Fantasy XV, the last being drammatica’s “Somnus.” “OMNIS LACRIMA” feels like the result of a fusion of Shimomura’s Kingdom Hearts-style strings-and-piano writing with the melodrama and Latin vocals one would expect from a mainline Final Fantasy title. It’s a sweeping, dramatic song, and one that has me excited to hear what the full game’s score will sound like. “The Masked,” however, feels more like something out of a Wild ARMs title. In the liner notes, Shimomura describes the song as having a “Latin flavor” with crunchy acoustic guitars and violin, and that’s an apt description. It’s easily one of my favorite songs on memória!.

The million-dollar question: Does memória! live up to its predecessor? Absolutely. Is it more of the same thing? Definitely not. There’s much larger variety of musical flavors on offer here, which came as a pleasant surprise to my ears. While those looking for “drammatica part II” may be disappointed to find the synth-heavy tracks and lots of vocals, the fact remains that memória! is a fitting, multi-faceted tribute to Yoko Shimomura’s musical legacy.