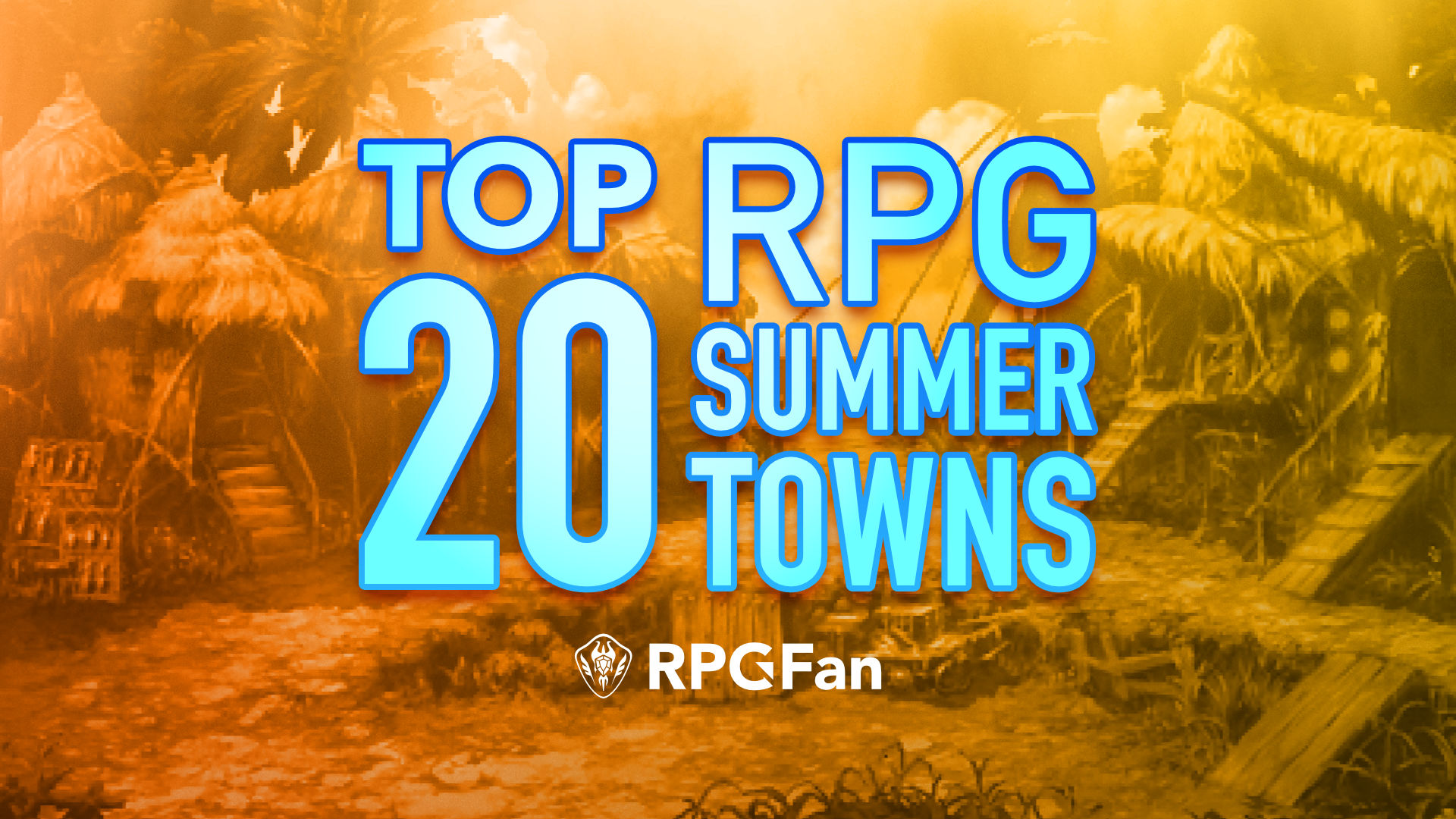 As summer comes to a close, I’m already lamenting the loss of beautiful beach vacations and the warm weather. Plus, who doesn’t love the excuse to stay inside and play a lengthy RPG when it’s too hot?

So, to help lessen the blow a little, we decided to get together and talk a little about our top 20 RPG summer towns and spots in RPGs. While we don’t visit all these spots in “summer,” they all give us that vibe, and we love them. And may we suggest listening to our recent Tropical Tunes episode of Rhythm Encounter as you browse the list?

What are some of your favorite summer spots in RPGs? Are there some we missed? Be sure to let us know on either Twitter, Facebook, Instagram, Discord, or however you most enjoy interacting with us!

In this stunning vaporwave utopia, statues line the coast, pyramids rise from the ocean, warm days are spent on sandy beaches, and an aurora lights up those hot summer nights… if you were born lucky enough to enjoy it (“Commoners! Get back to work!”) All is not right in this “perfect” paradise created by the immortal Syndicate to worship alien gods. In fact, the head of the Syndicate has been ghastly murdered! Was the culprit a frustrated citizen fed up with long hours of excruciating work? Was it an inside job by one of their own? There is trouble in paradise after all… and it’s happened 24 times before!

I love me a town that grows throughout the adventure, and this town also has characters that grow throughout the adventure! The castaways not only provide engaging stories of survival and cooperation, but open up new services that keep the gameplay systems fresh and exciting as the main campaign continues. Many castaways even get their own story arcs, such as the timid doctor Licht gaining confidence in his medical abilities or the aristocratic Austin learning some humility. The most special moments occur when the castaways join forces to defend the town during raids, establish a trade economy, and build a ship to escape the Isle of Seiren. Getting to help build Castaway Village from the ground up and seeing it grow is a highlight of Ys VIII: Lacrimosa of Dana.

While perhaps stretching the definition of a “summer town,” I honestly couldn’t get the Citadel, as experienced in the same titled DLC expansion for Mass Effect 3, out of my mind for this topic. The areas of the Citadel you get to traverse and interact with are reminiscent of a well-deserved vacation for Shepard; the entire galaxy is going to hell, thanks to the Reapers, and you’re given one last reprieve. There’s friends to catch up with, parties to throw, arcades to play around in, sports to bet on, and even mock battlegrounds. Plus, noodles that are spicy even for a Krogan! It’s just a shame that Shepard can’t get sushi there following a certain explosive incident. The Citadel DLC is a highlight of ME3 as both a love letter to fans and a fun vacation I’d gladly partake in again!

When thinking of RPG summertime locales, one of the first places that always comes to mind is Costa del Sol: a beachside resort town that features prominently in multiple games within the Final Fantasy VII Compilation. You even battle with a beach umbrella there in Crisis Core! Originally a Shinra vacation spot, there isn’t much to Costa del Sol in the original Final Fantasy VII beyond various touristy-spots, though you can later purchase the Shinra president’s very own, and very expensive, condo for bragging rights! The music superbly fits the beachy vibe permeating the town, and I love the overall relaxing atmosphere of Costa del Sol’s setting. Apparently Square Enix enjoys it too as a new version of the beachside community features in Final Fantasy XIV, offering residents of Eorzea the perfect vacation getaway from adventuring.

Downtown Ryukyu is my dream destination, and I say that having only toured it in a video game. This Yakuza 3 locale is modeled after a small part of Makishi in Naha, Okinawa. Coming off Kiryu’s usual haunts, I find it refreshing to stroll down its less crowded streets and alleyways. The district shopping arcade, for example, bustles, but hardly feels claustrophobic. I love how people can commute by monorail every day. I love how the afternoon lends the place a nostalgic orange tint. You get up to some of your most memorable hijinks here, like watching a scooter-driving grandma flip 360 degrees over a car! You also meet some of the series’ best, kindest characters, like Rikiya, there.

Ryu Ga Gotoku Studio worked their magic to infuse Downtown Ryukyu with a laid-back atmosphere that truly captures the spirit of summer. If you’re curious about the real place, lurking around Makishi on Google Maps isn’t a half bad way to spend a few minutes.

Unlike other regions in the Pokémon world, which may feature snow engulfed routes not far from sweltering settlements, all of Unova is at the mercy of the seasons. But no matter the time of year, Undella Town always screams of summer. It’s nearly deserted during spring, autumn, and winter, with a subdued music track that’s barely audible against the gentle crashing of waves. During the summer, the town comes to life with visitors and a tropical background tune.

The summer vibes live on year-round at the nearby bay. You can Dive into the water to explore the ancient ruins on the ocean floor. Other Trainers are also drawn to mystery, though, and any brave soul who doesn’t fear an abrupt end to their summer vacation can snoop around Undella Town’s villas to see who’s come to visit—just be prepared to get sent back to the Pokémon Center.

Need to get away while you’re trying to save the world from monstrous aliens? Drop into Summers, the world famous resort town! Hang out on the beach and get a tan, but take a moist towel in case you get sunstroke. Go to a weird club, have a bite of magic cake, and dream deeply.

Summers promises to be a brighter reprieve from the fetid swamps and grungy zombie wastelands you have to trudge through. Though the sun does shine brighter there, Summers has its downsides.  Similar to many popular vacation destinations, the high-priced gift shops, expensive restaurants, attacks from overzealous cops, and mad taxis are unfortunately relatable.

Thankfully, Ness and his friends can teleport away when they need to get away from their summer getaway. Saturn Valley, while more rural, is unheralded as a destination. At least they have a hot spring.

One of the first and last places you’ll visit in Chrono Cross, Arni is a small yet absolutely bustling beachside village. Not only does this little community feature grass huts, people in swimwear, and a central  market, it also boasts many important features to Chrono Cross’s overall narrative. For starters, the chief’s hut features the Record of Fate- a device used to control the actions of the people of El Nido. Your first few party members are encountered in Arni, along with a few important characters whose fates deviate between timelines. One of my favorite moments in Chrono Cross was convincing the despondent poet in Another World that “another” world exists where she successfully pursues writing poetry. Arni is a beautiful little tropical locale that feels alive and thriving; I can’t imagine a more peaceful or summery town on the El Nido archipelago.

Puerto Valor is the ideal beach destination in the world of Erdrea. In fact, its finest bar and restaurant is right on the beach itself! Enjoy a nice meal and then sit back to watch children play with penniless vagrants by the ocean. Puerto Valor is far more than just a gorgeous shoreline with crystal-clear water, though. You’ll want for nothing as every cobblestone path leads to a shop or destination. Why not visit the mansion of town leader Don Rodrigo and see the stunning swordsmanship of his courageous caballeros? If that’s not for you, Puerto Valor also features the largest casino the world over. And when you’re ready to sleep after all that fun in the sun, there are two nice hotels to pick from.

Puerto Valor is truly the finest destination in the land. Erdrea may be full of scary monsters, but Puerto Valor’s citizens have the utmost faith in their leader to protect their precious town. The world may be in turmoil, but you certainly won’t be in Puerto Valor.

Castaway Cove – Ni no Kuni: Wrath of the White Witch

In Ni no Kuni’s Seaside Paradise of the South, relaxation isn’t a perk; it’s a requirement. To gain entry, you’ll need to attain citizenship. The only requirement? Wear a bathing suit. While this might seem like a goofy concept, the reasoning behind this rule is to prevent violent crimes. After all, have you ever tried smuggling a weapon in a bathing suit?

Once you’re in, a guaranteed good time awaits. Fresh coffee, frozen treats, and a selection of fresh fish are among the available delicacies. Seaside cottages offer a wonderful vacation retreat. But the most obvious reason to go to a seaside town is to swim! With water within arm’s reach of any location in town, there are always places close by to get your swim on. Honestly, why would you go fight evil witches when there’s paradise waiting for you?