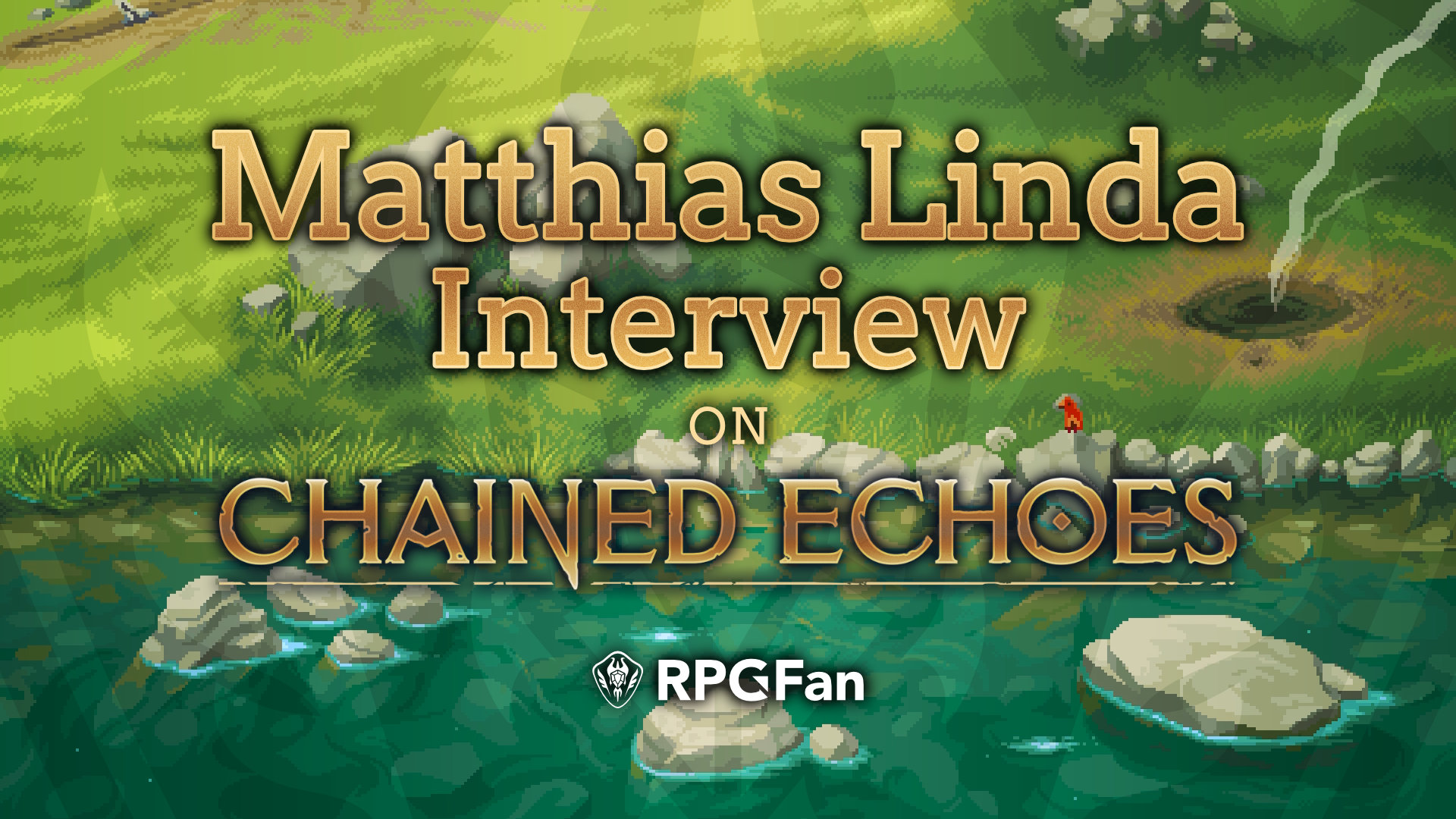 In early 2019, Chained Echoes exploded onto Kickstarter with a final total more than double the original goal: a pretty impressive result for solo developer Matthias Linda. If you don’t know what Chained Echoes is, then go watch this trailer. We’ll wait. Seeing the game in motion proves that Linda understands classic JRPGs and knows how to recapture our memories.

While Linda is currently busy finishing up the game, he was kind enough to take the time to answer some of our questions.

RPGFan: Developing a game is a monumental task, especially for a solo developer. How did you get into game development, and why did you want to develop this game in particular? What challenges have you faced?

Matthias Linda: Back in the day, I created small games with RPG Maker in honor of games such as Final Fantasy VI and Chrono Trigger. Well. They weren’t small. And I never finished one. And never released one. But you know, these were my first steps. I always wanted to create a game which captured the memories of my childhood. Not my actual memories, but the ones I have for the games I played back then. You could say that Chained Echoes is my magnum opus.

RPGFan: Chained Echoes immediately catches the eye of any fan of JRPGs. Which retro JRPGs inspired you? Which modern JRPGs?

Matthias Linda: There are quite a few games which inspired me. Xenogears, Chrono Trigger, Final Fantasy VI, Suikoden II. I’m really serious when I say I want to create a love letter to the golden era of RPGs. There sure are influences from modern games, probably quite a few from the Xenoblade Chronicles games. But also some ideas from non-JRPGs.

RPGFan: We all love mecha, and Chained Echoes has some great mecha designs. Why was it a priority to include mecha, and how important are they to the game? What are some of your favourite mecha designs?

Matthias Linda: First of all, when you play the game, it takes quite some time till you get to the mechas. They should feel like a reward. And they also change the combat system a bit. And the general gameplay. So yeah, they are pretty important. There are regions which you can’t reach without them. I wanted to have them to have a tool at hand to change things, to break with expectations. And I just love mechs. I don’t know. It felt natural to have them in my world.

I think my most beloved design is from Xenoblades Chronicles X.

RPGFan: Chained Echoes looks to have quite an expansive world map. Were the map and the airship something you wanted to include from the beginning of the project? What do you think world maps bring to a game?

Matthias Linda: For me, world maps give you a feeling of an open world. Back when I grew up, real open worlds weren’t possible but those world maps made you feel like you were traveling within a connected world. And I, on my own, fell in love with that idea. That’s why I wanted to have one, too. Plus, it is fun to design them and fill them with tons of little details. And yeah, it also allowed me to justify the existence of airships which I just love.

RPGFan: Chained Echoes’ combat system looks both strategic and fast-paced. What is the primary goal you wanted to achieve with this exciting battle system?

Matthias Linda: My primary goal was to make it look and feel strategic and yet fast-paced. So, according to your question, I already achieved my goal by 50%. Jokes aside, that was indeed what I wanted to create. I mean, fighting a boss monster should always take time, but I really wanted to create something which feels fast-paced while being turn-based. And something which still offers enough tactical depth.

RPGFan: Chained Echoes has a distinct visual style that feels fresh yet nostalgic. Do you believe you’ve been able to successfully convey your vision?

Matthias Linda: I hope so. From my personal perspective I did, but the players will decide in the end, right? My vision was… well, that’s hard to explain. So, I tried to create a game which looks like how I remember the games from SNES era. Not how they actually look like but how I remember them to look like. The more time passes, the better they look in my head. That’s the style I was aiming for.

RPGFan: Though Chained Echoes’ composer Eddie Marianukroh only has a handful of game credits, his portfolio of work is quite impressive. How did you meet Eddie, and what made you decide his scores were the perfect fit for Chained Echoes?

Matthias Linda: It is relatively unspectacular how I met him. I posted an offering in a place for composers and he applied. I fell in love with his work right away. And, well, here we are. He is probably one of the most talented musicians I have ever met. And I knew when we talked for the first time that I could trust him blindly. And so I did. He could do whatever he wanted to make the soundtrack as fitting as possible.

RPGFan: Since Chained Echoes so effortlessly brings to mind old favourites, we have to ask – would you like to be a part of the development of an established/beloved RPG series? If so, which one?

Matthias Linda: Final Fantasy. To be exact, the very first Final Fantasy. God, imagine your name being listed in the credits of one of the most influential games of all time.

RPGFan: What’s next for you? Do you plan to keep developing games?

Matthias Linda: Oh that’d be great. This depends obviously a bit on the success of Chained Echoes. But yes, I want to continue developing games.

RPGFan: Do you have any words for aspiring developers?

Matthias Linda: Make sure to combine what you have early on. If you build levels, assets, mechanics, quests and all that separated, trust me, it makes sense to bring everything together as early as possible. Your concept might look good on paper. Your mechanics might be cool. But only if you have everything working at the same time, you will really know if your ideas work out or not. Plus, throwing everything into a playable build is way more work than you might think it is. And it helps to have it done once to know what needs to be done.

As was recently announced, Chained Echoes is releasing on December 8th, 2022 on PS4, PS5, Xbox Series X|S, Switch, and PC. RPGFan would like to thank Matthias Linda for his time in answering our questions, for his continued hard work on Chained Echoes, and for sending along this photograph titled, “Matthias Linda — after seven years of game development.”