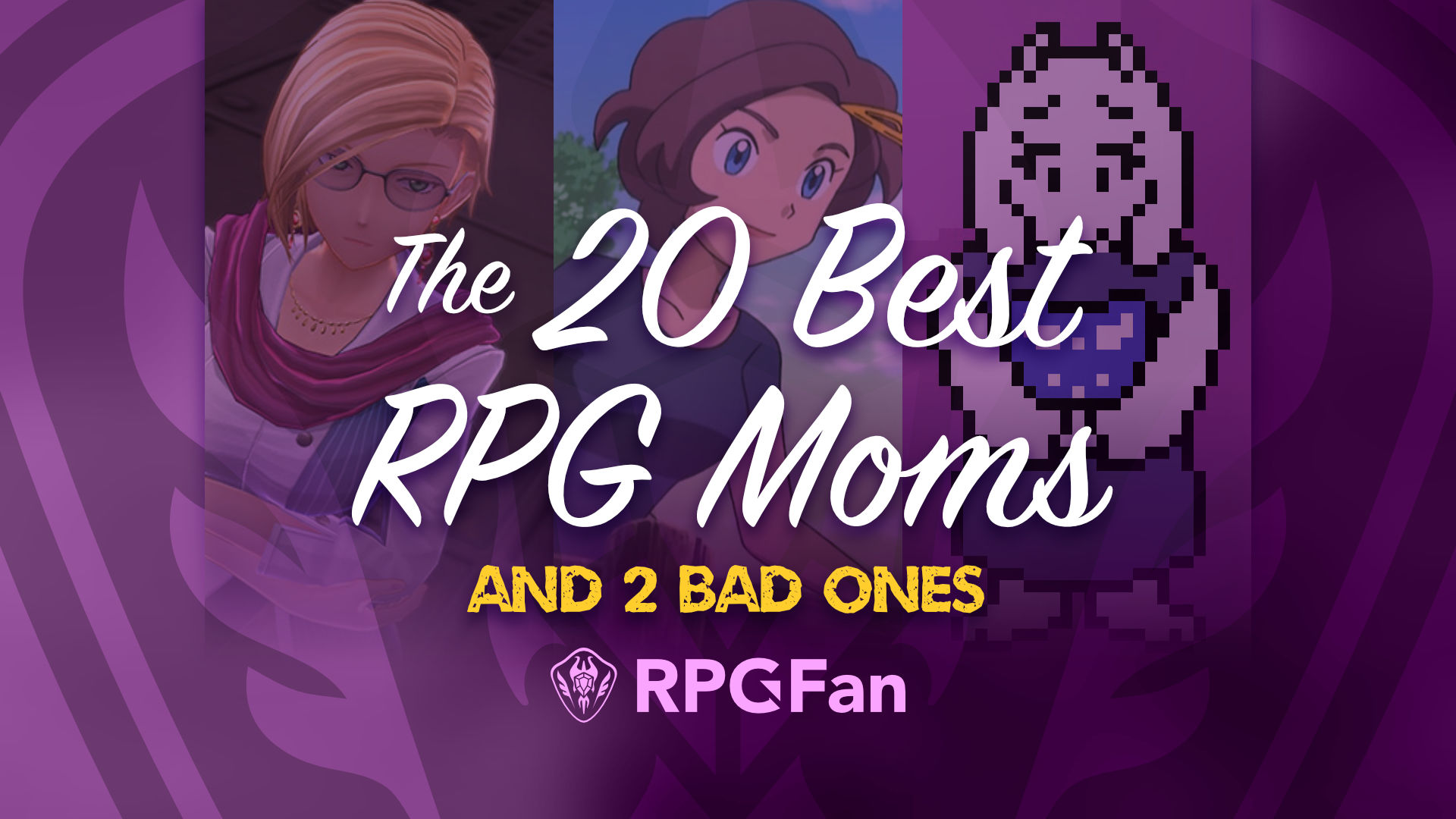 We at RPGFan wanted to give some appreciation to the mothers out there on this Mother’s Day, so we’ve compiled a list who we feel are the 20 Best RPG Moms, along with commentary. Some are incredibly giving, some are complex, and two…well…let’s just say the last two are antagonists where those mother-child bonds come into play. It all goes to show the sheer power of that relationship. These are a bunch of cases where those particular relations quite literally changed the world, so remember to appreciate and honor those types of attachments in your own life, no matter what form they may take. Enjoy!

See the first ten below, with the second half of the best RPG moms on page 2. Be sure to also check out our companion feature, The 30 Best RPG Dads!

Lucia is the capable leader of the Karayan Clan of the Grasslands, and also the single mother of one of Suikoden III‘s main characters, a teenage boy named Hugo. In Suikoden II, players were introduced to her before she became a mother: as an impulsive warrior wanting revenge for wrongdoings towards her clan. It seems that motherhood and years of leadership calmed her, but it never diminished her desire to protect her people. Lucia balances her role as leader and love for her son throughout Suikoden III.

You know one thing that makes any adventure exponentially easier? Having the full and unerring support of a mom who’s created a cozy home for you to come back to. There’s even a status effect where Ness gets homesick and you need to call Mom to cure it. Whether she’s giving you your favorite food and sending you upstairs to get rest or teasing Pokey on your behalf, she’s there for you. If a mom’s role is to encourage their child to explore/find a place in the world while providing a safe foundation, then Ness’s mom strikes that balance beautifully. And she does all this while achieving peak Mom-ness on the phone. (We’ll try not to interrupt your soap operas or aerobics too much with phone calls while we’re saving the world, mom!)

Gina is the first voice you hear in Chrono Trigger, and for good reason: She’s your mom! Well, she’s Chrono’s mom, and like all great mothers, she’s making sure you get to the Millennial Fair on time! Chrono may not have embarked on his incredible time-hopping adventures without his mom’s timely reminder (and allowance to boot!), so let’s give thanks to the real hero who started it all: Gina, Chrono’s Mom.

If the player develops a rapport with Samara it is revealed that her true Justicar purpose is to find and kill her daughter, Morinth. All three of Samara’s daughters have a rare genetic condition that results in them inadvertently killing those they “mate” with. However, Morinth didn’t wish to go into a monastery, instead killing in her wake and leaving Samara feeling responsible for those deaths. Despite this, Samara mentions she considered Morinth the bravest of her daughters: a proud mother even with her familial tragedy. In Mass Effect 3, players are given the opportunity to help Samara see that her other two daughters are just as brave as Morinth in their own ways, and can help her have a healthy relationship with her youngest. Samara’s devotion to her children isn’t how most stories would present a caring mother figure, but there’s no denying that she loved her children if the player takes the time to get to know her.

It’s hard enough to be a single parent to a child, particularly after your one night stand with a wayward adventurer during the unleashing of an eldritch horror left you pregnant and alone. Harder still when it’s 1913, you’re Roma, and both you and your son possess unimaginable powers sought by the Inquisition. And yet, Koudelka, who has dealt with ostracization and fear all her life, is determined to make sure her son Halley doesn’t fall into the same bitter hatred of the world that she has. From sacrificing herself (twice!) to make sure Halley is spared to trying her best to make sure he understands his strange powers, Koudelka makes sure that Halley knows she loves and cares for him. One of the great reveals of the game is that the mysterious voice guiding the protagonists is, in fact, Halley’s mother. It’s fitting that is how she’s identified for nearly all of the game afterwards. Still arguably one of the most powerful figures besides Roger Bacon and Albert Simon, Koudelka still sees herself as Halley’s mother, first and foremost.

In the grand scheme of things, Medena is a very minor character. However, how her plotline plays out in one pivotal Xenogears scene really sticks with the player even years later. No matter what the truth of her blood relation to her daughter Elly was, it was obvious she was her mother in every way that makes that word have meaning.

Suikoden V, like the rest of the franchise, has an enormous cast of characters, but few are as immediately important as Kisara and her family. Hailing from the waterbound people of Raftfleet, the whole gang are tough-as-nails fisherpeople, and Kisara is regarded as a vocal authority amongst them. She’s also exceptionally well-known for her beauty and once had to help fend off envious suitors to protect her chosen then-fiance, Logg. When she’s not accompanying the Prince into battle, she’s keeping her foolish husband and their rowdy daughter Lun in check.

Adoptive mothers are underappreciated in real life and do an incredible job, so we should take this opportunity to celebrate one of the first adoptive mothers in video games, Elmyra Gainsborough. Elmyra adopts Aerith after finding her with her dying mother Ifalna at the Sector 7 train station. Ifalna asks the woman to take care of her daughter for her, and Elmyra adopts the Cetra’s daughter. She protects Aerith with her life, refusing to talk about her adoptive daughter’s powers too much and stopping Shinra soldiers from taking her away. She’s a gentle and caring soul with a stern nature; later on, she even ends up caring for Marlene, Barrett’s adopted daughter, but not without scolding Barrett first. Elmyra is selfless, willing to look after anyone and protect them from the evils of the world. Her importance in Final Fantasy VII is underplayed, but without her, Aerith may have been a very different character.

Karen is a well-respected Queen of the Amazons, though in Loren The Amazon Princess she ends up giving up that title in the name of love, putting her at odds with her daughter as Loren inherits the throne. Eventually the new ruler ends up respecting her mother’s actions, relying on Karen for support and advice. Theirs is a complicated relationship based on mutual respect and, ultimately, love. You further see Karen’s feelings for her daughter through their interactions in the prequel game Tales of Aravorn: Cursed Lands, which showcases the two of them during a much more innocent time in their familial history.

Toriel is the first friendly character the player meets in Undertale. Taking the human under her wing, she guides you partway through the ruins and tells you to stay until she gets back. Toriel is extremely motherly and caring, worrying for the protagonist constantly. You see, Toriel has been through this before, having had a son herself and adopting the very first human who fell into the Underworld. Sadly, she lost both, and she left her husband who declared war on humanity from that point onward. Toriel attempts to adopt you (just like she did with the first human) because she doesn’t want you to follow that same fate as her first two children did. She cares for her kids, both adopted and otherwise, regardless of whether they’re human or monster. She is the epitome of Undertale‘s themes of kindness and forgiveness, and the perfect mother for any game.