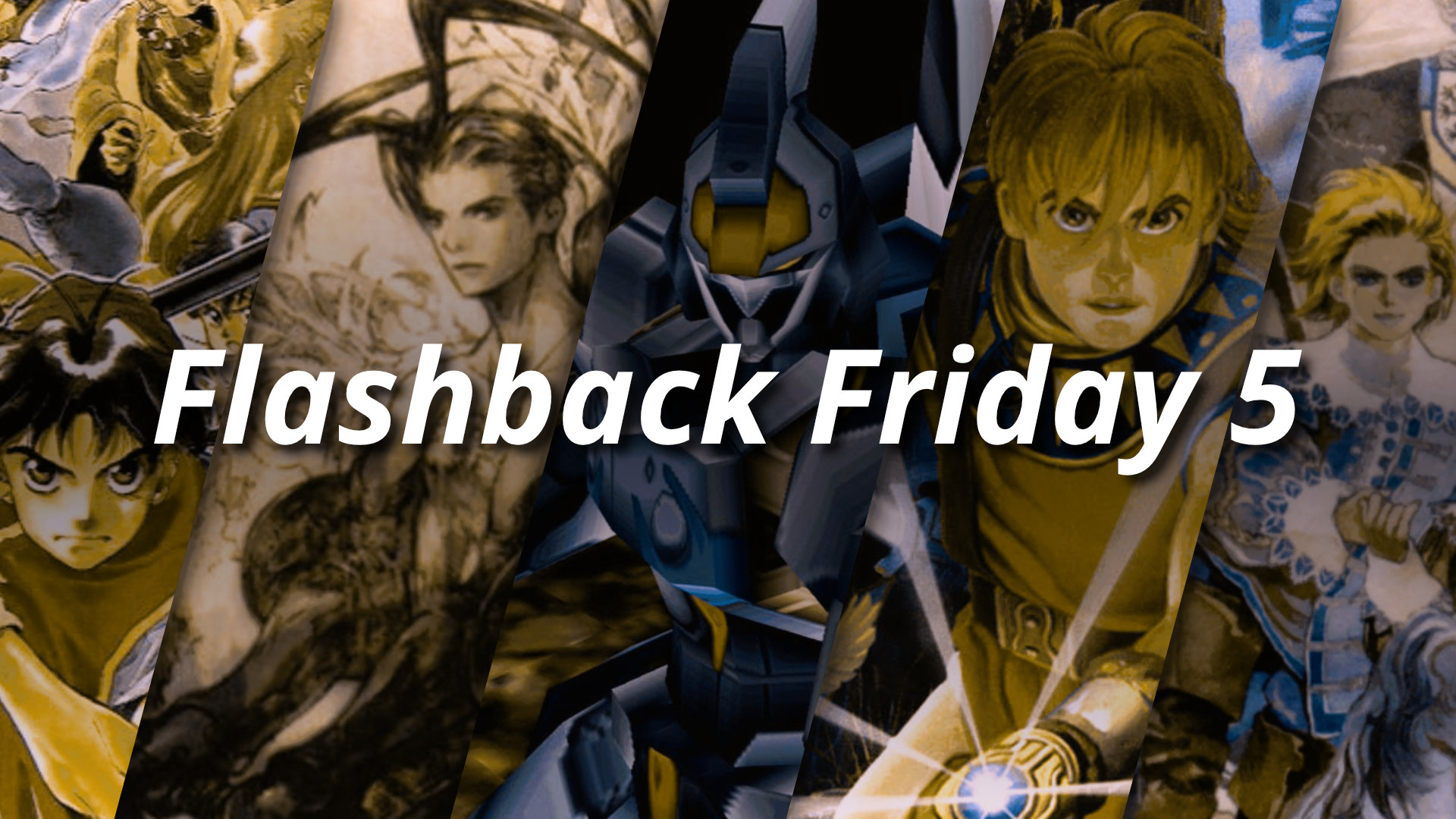 I hear your screams of discontent. This is supposed to be about nostalgia and looking back on fond memories, right? Right. Don’t worry, this is very much that, just as a top list. I wanted to share with you five great games (in no particular order) for the original Sony PlayStation that I think you’ll truly enjoy, and share a fond memory of each while I’m at it.

Yes, I’m talking about the original Suikoden. This was the game I played almost immediately after Wild ARMs. Where Wild ARMs was a gift from my Grandfather, Suikoden was something I picked up by myself. It drifted into my local Blockbuster at some point in late 1996 and, despite the hideous cover art, I decided to give it a try. I remember thinking “what does Suikoden even mean?”, and then being able to connect it to my childhood growing up listening to excerpts from The Water Margin that my Grandfather would translate for me.

These days, Suikoden is a bit rough around the edges. The pacing is a mess, the artwork is amateurish (Junko Kawano has come a long, long way from those first watercolours of Tir and company), and the whole thing feels a little early. Because, after all, it was. Suikoden was emblematic of those early PlayStation days, where developers were just coming to terms with 3D, expanded colour palettes, Red Book audio, etc.

Despite that, it’s an utterly charming adventure, with intrigue and rebellion at its core. Seeing your castle grow as you recruited each of the 108 characters, hearing the incredible music as you paraded across the overworld, and living through one of the most heart-crushing character tragedies of all time, all make for a deeply memorable adventure.

I’ll talk about this one at much more length at some point, but I’m sorry to say I passed on Vagrant Story when it was first released. I read somewhere that the combat was “clunky” and immediately dismissed it. The game looked too gothic for my tastes at the time, too much like a “boring PC game.” I had a thing against the darker Western-style fantasies available on the PC platform. Sure, I played Diablo and Diablo II at the behest of my friends, but things like Baldur’s Gate and Icewind Dale just didn’t do anything for me. From a distance, Vagrant Story looked just like those games in terms of theme, and that wasn’t what I wanted from my PlayStation.

Ten years later, I rectified my oversight. Vagrant Story is a masterpiece, both in terms of storytelling and technical achievement. Yes, the combat is clunky and way ahead of what the hardware could provide, but the whole game is that way. What developer in their right mind gave their characters breathing animations on the PlayStation? Or used fully 3D environments with segmented enemies whose specific body parts could be targeted? Or had dynamically-moving camera angles and movie-like cutscene direction?

It’s a tour de force of technical achievement, and it really doesn’t take the easy route on anything. I can only imagine what heights it may have achieved a generation later on something like the PS2, but Yasumi Matsuno and his team made miracles happen on the original PlayStation.

Man, how do I even start with Xenogears? While the majority of my friends who played RPGs enjoyed things like Final Fantasy VII or Chrono Trigger, Xenogears was just too “intense” for them. It was esoteric, it was demanding, and it completely evaporated as a game for a good portion of the second disc. To enjoy Xenogears, you had to be willing to put up with a lot, and I was just that kind of teenage child.

It may sound strange, especially for an early PlayStation title, but Xenogears holds spiritual significance for me. I’m a believer in reincarnation and I always have been, so the themes visited by the game spoke to me at a level beyond entertainment. I knew it was fiction and far removed from my sincere beliefs, but it stimulated thoughts in me that I still value to this day. It was also the first game that got me to think about “theme” more than spectacle. I wanted to understand Xenogears and interpret what it was trying to say. It wasn’t easy, and it still isn’t. There’s a reason they had to publish Perfect Works—essentially an encyclopedia to round out the lore.

I wasn’t raised in any Abrahamic faith—most of my family is Buddhist—but hearing and seeing Gnostic ideas presented in a format I was so keen on was eye-opening. I feel like Xenogears is that for a lot of its fanbase, even if they don’t sincerely share belief in what it explores. It’s a game I would describe as literary in nature, and there’s nothing else out there quite like it.

Okay, before you cry “they don’t have faces!”, neither did anyone in the original Metal Gear Solid (mostly). The Granstream Saga is an early attempt by a developer that hadn’t made a 3D game before, and it shows. Despite that, Quintet did a surprisingly adequate job with what was available to them, making one of, if not the first fully 3D RPG on the PlayStation. Plus, it has some pretty great animated cutscenes by Production I.G., some of the finest on the system.

More than anything, however, it fulfilled an aesthetic hunger in me because a lot of it takes place on a continent in the sky. I’m an absolute sucker for skyborne adventures, whether it’s a game like Skies of Arcadia or an animated series like Last Exile. I didn’t pick up The Granstream Saga expecting it, either. Its skyborne setting and ancient temple-inspired motifs just became the reasons I kept on playing.

The Granstream Saga is one of those “forgotten” games that I love. It has no real home in the hearts of most gamers, and few people know about its relationship to the rest of Quintet’s major works: Soul Blazer, Illusion of Gaia, and Terranigma. It has awkward controls and primitive graphics, but it’s charming despite that. I don’t recommend it so much as a “high quality” sort of experience, but as a novel one, especially for those that love adventures in the sky.

SaGa Frontier 2 is a bad game. It’s also really, really good. It’s completely broken and nothing seems to make sense about its leveling system, but the game is absolutely gorgeous and has a deeply intriguing narrative. The music is outstanding, the painterly backgrounds are some of the best on the PlayStation, and yet it’s a game that is deeply unrewarding to actually progress through. I can’t tell you how many times I’ve picked it up, played ten or even fifteen hours, and put it down in frustration due to the way its weapons work.

Despite all that, I love the game. I wish more games were like it and its visual cousin Legend of Mana: storybook illustrations come to life. Beautifully rendered 2D sprites on lush, hand-drawn backgrounds that don’t have any of the artifice of modern mobile games or 3D cel-shaded approximations. Since since I first played it in 1999, it’s stuck with me. And I mean stuck.

A fair warning: I’m going to talk about a dissociative experience, a type of which manifests where you aren’t certain that your reality is “correct.” I don’t experience these anymore, but for a brief period in my teenage years they cropped up from time to time.

The related (and my first) dissociative experience was in 2001, when for some strange reason I thought the world should look like SaGa Frontier 2, despite knowing that was wrong. It was a feeling which lasted for hours and an experience I’ve never really been able to get my head around. I even had a dream where the experience recurred, and I relived a memory in that dream but through the graphics of SaGa Frontier 2. It was weird, and I’m glad it never happened again, but it shows you just what kind of impact the beauty of a thing can have on someone.

SaGa Frontier 2 looks like someone took a piece out of a game’s artbook and made it the actual game. It’s a low-res affair by today’s standards, but in 1999 it looked like absolute magic. Even if you never quite get a handle on the broken systems within it, SaGa Frontier 2 is worth the hours of your time just to indulge in the high quality aesthetics.

That’s it! All five games I truly want to recommend you go out and experience. Yes, the original PlayStation has an enormous library, and plenty of my favourites aren’t on this list. I love Final Fantasy VIII more than is socially acceptable, and neither The Granstream Saga nor SaGa Frontier 2 are actually major favourites. But that isn’t the point of this list. These are games I think are unique and interesting experiences. Things that can leave a real impression on the player, even if they aren’t all-around great works. I think that some experiences are valuable because of their oddities and individual achievements, and every game on this list offers something in that regard.

Did you enjoy this list? Do you have games you’d like to recommend? Leave them in the comments below. If you’d like to see more lists like these, let me know as well. I already have plans to share something similar for Sega Saturn games, so look forward to that in an upcoming column.