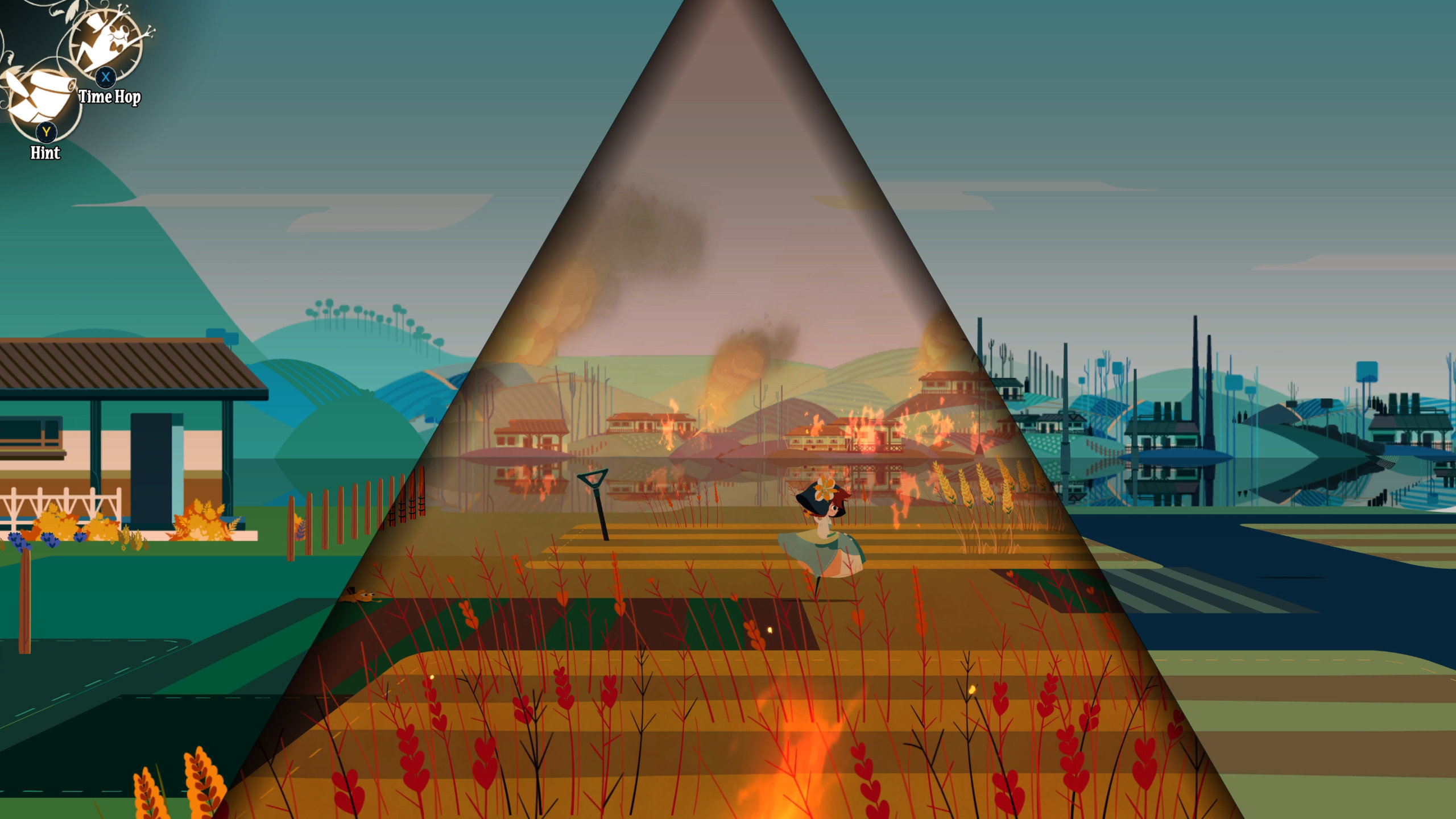 I have a cruel master.

One week into Ring Fit Adventure, and I can already feel my abdomen beginning to poke out a bit (in a good way). I’m also convinced my neck is a tad thinner. My legs, however, are actively questioning me on whether or not I made some Faustian deal with the devil, and although I walk a lot, they were clearly unprepared to do anything more intense than that.

I guess I’m Ryuji now. You know, from Persona 5. He gave up running for a while, and it took him a bit to recover. Only, I’m nearly twice Ryuji’s age because “time is the fire in which we burn” and all that cynical jazz. Which — in all likelihood — is making this harder on me than it was on him.

Ha, my character arc is that much richer, Sakamoto. Deal with it.

Anyway, RPGs coming this week. There are a good number of them. You love to see it.

Well, you’re a highly-trained soldier. You also exist in a universe that seems to have taken a few cues from Tron. Together, this one-two combination ought to ensure your successful infiltration into a seedy alien space station, but alas, the world is not so kind. Instead, things go horribly wrong, and before you know it, you and your mates are engaging in tactical turn-based combat. Your foes are a synthetic race of beings, and your hero is Angel, a special agent with martial arts skills.

The wonderful thing about The Protagonist: EX-1 is that the likelihood is nil that martial arts special agent Angel will find themself in a situation as stupid as the one from Babylon 5: Legend of the Rangers. (Seriously, what the hell, J. Michael Straczynski?) I know this because I read an Early Access review of The Protagonist and not once was anything so dumb even alluded to, let alone mentioned. So, you’re probably good to go with the full release this week.

I suppose I can briefly loop back into my Ring Fit Adventure escapades courtesy of this screenshot.

Anyway, Akiba’s Trip: Hellbound & Debriefed is a remaster of the first game in the Akiba’s Trip series. The lead character transforms from an otaku into a vampire-like being with a weakness for the sun. I’m honestly not at all convinced that’s an actual transformation, but here we are. In the 2011 original, you must expose other vampire-like beings by stripping them down to their underwear. You can also visit maid cafes and cosplay to your heart’s content. If this sounds cheeky, there’s a reason — it’s cheeky.

Of note, this is the only Akiba’s Trip that the West hasn’t seen until now, so it’s worth checking out when it hops onto PS4, Switch, and PC this week. It’s my understanding that there’s not a whole lot by way of added content here, but even if that’s the case, it’s technically 100% brand new for most of us!

We’re pretty excited about Cris Tales. It takes some cues from such titans as Chrono Trigger and the Persona series, which becomes readily apparent between the time-skipping, the problem-solving cast, and how hero Crisbell’s interactions with other characters can influence the world and story. Between a superb art style and an appropriately compelling suite of differences between the past, present, and future versions of your adventure locales, Cris Tales has a lot going for it when it launches on, well, a lot of systems. My props to the developers for that; it can’t be easy for smaller studios to craft so many different ports! And if you want more details on the game, we interviewed Derek Neal, lead producer on the game, just last month!

Death’s Door is an action RPG from developer Acid Nerve, published by everyone’s favorite “strange E3 presence” publisher, Devolver Digital. The premise is a hoot; you’re a Reaper-like figure known as the Crow, and the game treats your job something like a standard-issue 40-hour workweek. From afar, I honestly believe the Crow looks like Kylo Ren, but that’s hardly his fault. Eventually, Death’s Door brings the death-making Crow into a strange realm where creatures live “far past their expiry.” In the spirit and tone of this game, that’s a problem you’ll need to solve to put the universe back in cosmic balance. In the spirit and tone of other games, I bet they treat it like a good thing.

I feel like I’ve written at length about ENDER LILIES: Quietus of the Knights many times already, and that’s because I have. If you missed its arrival on Switch and Windows a few weeks back, here’s what you need to know. I’m quoting Quinton without their express permission, so first, allow me to ask if it’s cool. “Quinton, is it cool?” “Dude, it’s fine.” “Thanks.”

When the “Rain” transformed all living things into frenzied monstrosities known as the Blighted, the denizens of Land’s End knew they were in a right mess. As despair spreads across the realm, a young girl named Lily awakens in a church and… well, subsequently sets off to go full Dark Souls on the ugly blighters with the aid of powerful knights who don’t see anything wrong with following a kid in a white dress into combat.

With its expansive map, numerous weapon types, and a conclusion that will reflect the choices you make along the way, ENDER LILIES: Quietus of the Knights has made the right sort of splash throughout its Early Access phase. Now, it continues its full launch rollout with PlayStation hardware. Go play it. You know you want to.

Fatal Twelve follows high-schooler Shimisai Rinka. Two things are almost immediately clear about Rinka, one of which is a bit surprising, and the other goes without saying. The former is that young Rinka is already running a café despite her age. The latter is that her life is soon turned upside-down thanks to a significant event. Given that this is a Japanese work about a high school student, I feel this goes without saying. If you’re in the mood for a cute visual novel, solve yourself a mystery and make yourself some friends today. If you’re simply looking for a great game that teaches you about coffee beans, I suppose you might still be in the right place.

You should go read Patrick Gann’s review, by the way. I like the way he writes. You will, too.

Have you ever thought to yourself that the one big thing Pokémon is missing is a MOBA spinoff brought to you by a massive Chinese multinational technology conglomerate holding company? If so, boy, do I have a game for you.

It kind of felt like Pokémon UNITE crashed the party when it was revealed as “the big thing” during Nintendo Pokémon Direct a little over a year ago. Many fans felt let down by such a thing, especially with “streaming influencers” all doing that thing where they shout excitedly about it during the reveal trailer. But as the game resurfaced with more details and in the wake of largely positive closed beta impressions, the narrative around UNITE has changed considerably. Now, I’ve spoken with many fans who are excited to give the five-versus-five MOBA a fair chance when it arrives free-to-play this week on Switch, iOS, and Android devices.

Last Stop has all the makings of another potential Annapurna Interactive gem. Labeled a “video game about secret lives,” Last Stop brings together a spaced-out schoolkid, a middle-aged single dad, and an ambitious professional. I don’t need to have played the game yet to make an educated guess that their eventual crossover will feel appropriately bizarre and that Annapurna has selected such a weird premise because that’s more or less what lets them shine their brightest. Throw in a soundtrack from BAFTA award-winning composer Lyndon Holland, and well… it’s a date. Something tells me this is going to be great. Or good. Or decent at the bare minimum.

It feels like we’ve got ourselves one of those wonderful weeks wherein there’s something for just about everybody, which is rad! But it also feels like this is a bit of a calm before an unexpectedly packed late-July storm. Next week, NEO: The World Ends With You marches onto the scene, as well as the Pixel Remasters for Square’s first three Final Fantasy games.

Now, if you’ll excuse me, I’m off to get ripped. Or rather, far less flabby. But that doesn’t have as good a ring to it, does it? No, no it does not. So consider my abs poppin’ off until further notice.

Wait, that’s not good, either.