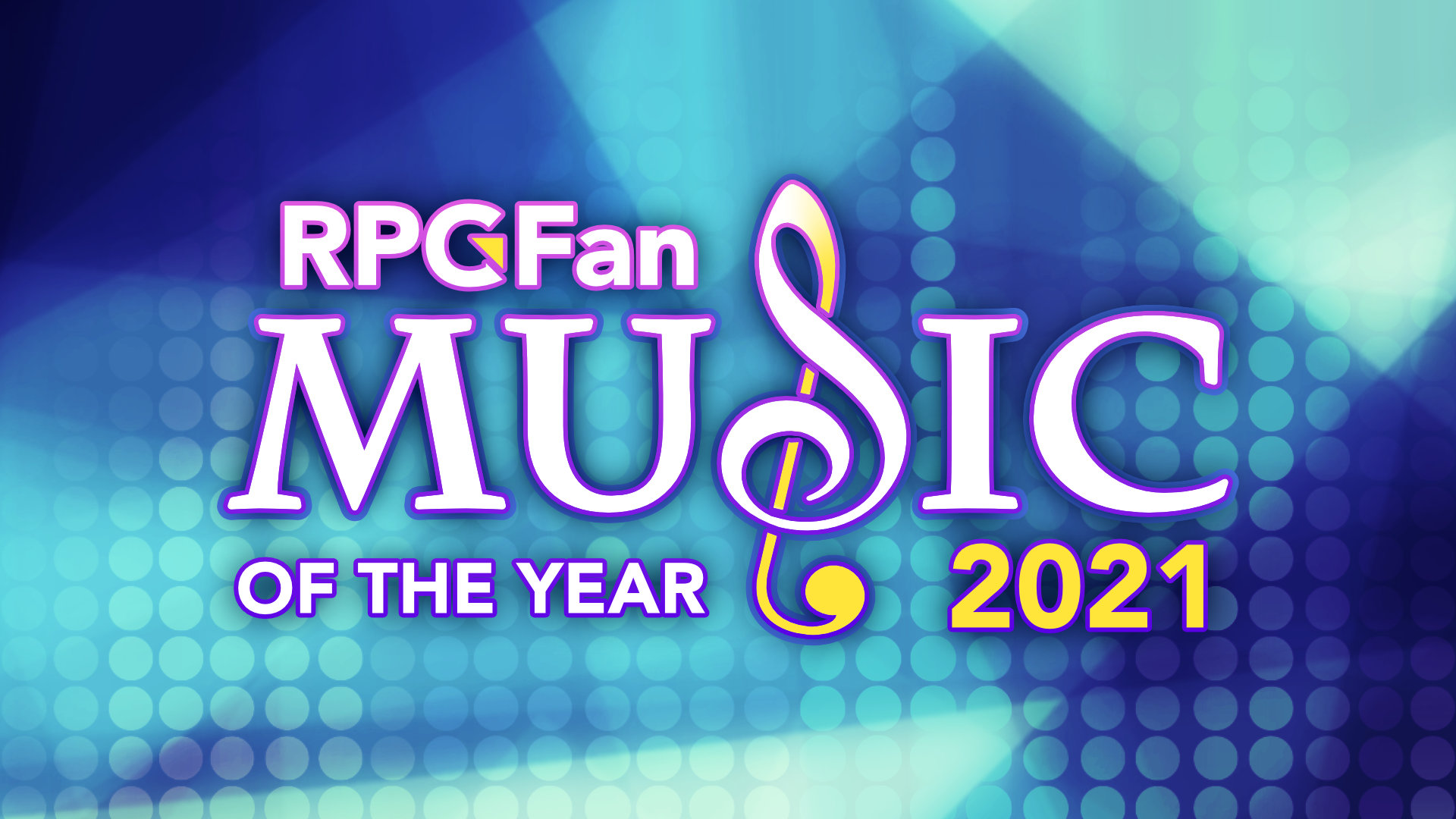 As one year ends and another begins, it’s a natural time for reflection—looking back over the year so we can take what we want to keep from the previous year into the new. And, honestly, as fun as it can be to discuss the best or most anticipated games, what leaves more of an emotional impact than music? That’s why I’m particularly excited and pleased to present 2021’s Music of the Year. Our overall picks are the result of a widespread internal poll with different staff members writing their thoughts on each album. We also have our individual awards, which allow contributors to curate a more personal list and go into more detail about their specific picks.

We presented a Rhythm Encounter episode with some highlights, but it always gives us great satisfaction to curate a list of the year’s notable releases together. Please join us on this journey, and hopefully you’ll find something you really like.

What are some of your favorite soundtracks of the year? Make sure to let us know on Twitter, Facebook, Instagram, Discord, or however you most enjoy interacting with us!

Basiscape’s return to the excellent 13 Sentinels: Aegis Rim soundtrack is a blast of sound and creativity and an exercise in experimentation and mood. What was already an energetic soundtrack has evolved like the very amino acids many of the songs are named after.

Lead with “Brat Overflow -Branched-,” Remix & Arrange ups the ante from the get-go, taking what is a fascinating and rousing title song and turning it into an anthem for battle with additional electronic instruments and heavier percussion. Other tracks go in the complete opposite direction, such as “In the Doldrums -Branched-,” where the flute and birds chirping at the start stand in stark contrast to the peppy, halcyon-evoking music from the game. There are even a few original tracks to boot.

The crowdfunded project published by Wayô Records turned out to be one of the best, and subtle, piano collections in years. Having Benyamin Nuss perform works arranged by Masashi Hamauzu and others from one of Yasunori Mitsuda’s best scores? It’s a match made in heaven, and I daresay it takes risks as a crowdfunded project that Square Enix Music might not have taken had this been an in-house project. My detailed thoughts on this album have already been made known. It’s a worthwhile album and definitely a great precursor to the upcoming Chrono Cross re-release!

Actraiser came out mere months after the SNES launched, and Yuzo Koshiro’s orchestral soundtrack was a stunning demonstration of the new console’s technical prowess. It was also a beautiful showcase of Yuzo Koshiro’s range as a composer. Actraiser was a dramatic departure from his work on the Ys series and Revenge of the Shinobi, drawing heavy influence from contemporary cinema and classical music. Still, there’s a certain energy throughout that is undeniably Yuzo Koshiro. It’s a classic that has languished in relative obscurity, but I am happy to see that Wayô Records chose to give this soundtrack some attention with a new release. Not only does this album feature a new remaster of the original soundtrack, but it also comes with a new arrangement and recording of the Actraiser Symphonic Suite, performed by the New Japan BGM Philharmonic Orchestra. It’s a loving tribute to this oft-forgotten gem, and many tracks feel like they always belonged in this setting.

Atelier Ryza 2: Lost Legends & the Secret Fairy continues the long-running Atelier series’ more recent trend of new directions. As a direct sequel to Ever Darkness & The Secret Hideout, the soundtrack is a very fitting parallel to the story content of both games. Ryza centres around the titular alchemist’s journey to find a purpose on her home island, whereas Ryza 2 throws her straight into adult life in the big city.

Perhaps due to a slightly different composition team, or maybe to directly reflect Ryza’s personal growth, Ryza 2‘s soundtrack contains much more diversity in its styles and use of instruments than Ryza did. There are solo piano pieces such as “Okay Lets Start” (sic), a honky-tonk-ish toe-tapping piece, through to more grandiose and fantastical tracks such as “City of Stars Reflected in the Water.” It’s consistently beautiful, whimsical, and retains a signature style throughout, while being versatile in its intention.

The original Blue Reflection soundtrack introduced me to a whole new subgenre of music that I never knew existed: artcore. Upon hearing the tracks for the first time, my heart resonated with the chaotic and pretty rhythms of pure emotion that replaced traditional music structure. Blue Reflection: Tie (Second Light)‘s Official Soundtrack is a heartfelt follow-up that shores up the weakest points of the first OST while continuing to elevate and expand the subgenre of electronic music.

One of the OST’s biggest strengths is its usage of the series motif. The simple string of notes gives it a stunning identity that evokes memories and emotions the moment they are heard. Every song pulls at the heartstrings in a different way. Some grant the feeling of desolation mixed with serenity while others give an exciting and warm spark of hope and strength. Much like the game, the soundtrack is simply magical.

Revo is a Japanese composer and musician who leads the self-described “fantasy band” Linked Horizon. Their music is a wonderful amalgamation of instrumental Classical and Rock genres, and their signature style has become a defining feature of the Bravely games. The battle theme for Bravely Default II, “The Bell of Battle Tolls Again,” is a truly bombastic pulse-raiser. It layers percussion, string, and brass instruments at a BPM you’d be hard-pressed to keep a walking rhythm to. The soundtrack as a whole is full of nuance, perfectly compliments whatever in-game situation you’re in, and is an overall treat for your ears.

Mitsuda’s own studio (Procyon) and label (Sleigh Bells) published a live concert Blu-ray (also available as a digital download!) featuring three hours’ worth of footage from the finale to their Radical Dreamers tour. The Millennial Fair is in perfect form, having way too much fun with the faster tracks while bringing the audience to tears with the slow ones. Vocalist Sarah Alainn is there for a great deal more than the end credits music as well. She appears to have created original English lyrics for some tracks and has added real vocalizations to improve upon the sampled vocals used in the OST (see “Dragon God”). I confess, I need to spend more time with this one, because this is something incredibly special.

Deltarune Chapter 2 has solidified my opinion that Toby Fox does leitmotifs better than anyone else in the video game music industry. His soundtracks are saturated with recurring themes, and he weaves them together with such deftness and specificity that one could glean a few plot spoilers from a careful listen. Of course, it doesn’t hurt that the individual tunes are as compulsively listenable as ever. With the help of a small list of guest composers, this soundtrack is complete with engaging tracks for characters (“Queen,” “Berdly,” and “Spamton”) and the world (“A CYBER’S WORLD?” and “WELCOME TO THE CITY”). As one would expect, Deltarune Chapter 2 carries forward the intriguing tonal balance set by its predecessor, both in its narrative and its music. It’s a cheerful and energetic affair with tons of retraux flair, but it’s marbled with a sense of foreboding throughout. The album’s strangely sombre opening track “Faint Glow” illustrates this duality perfectly. While Deltarune’s music is undeniably fun, there is a hungry darkness just beneath its cheerful veneer.

Yes, there was a brand new expansion for Final Fantasy XIV in 2021. But as longtime fans know, Masayoshi Soken isn’t one to rest on his laurels between expansions. Containing music from patches 5.1 to 5.56 of Shadowbringers, Death Unto Dawn is where some of the best songs in the MMO make their debut.

There are some incredible arrangements with the techno-style “Twice Stricken” and the sweeping, triumphant orchestral version of “Rise of the White Raven.” Final Fantasy VIII and NieR (Automata too) fans also get a feast with the Eden and YoRHA: Dark Apocalypse music (“Ami” is the last song I expected to get a beautiful arrangement, while “Kaine – Main Theme of Final Fantasy” might be the best ever version of the character’s leitmotif.) Throw in a veritable bounty of original music, such as the dungeon theme “Seven Flames” and the sorrowful “And Love You Shall Find,” and I’m not sure you can make a case against the Final Fantasy XIV composers being the best in the business.

Here is my one-sentence review of Eastward’s soundtrack: It sounds like it looks.

But seriously, that’s high praise. If you have drooled over this game’s nostalgic yet unmistakably modern pixel art as much as I have, then you’ll be glad to hear that Joel Corelitz’s soundtrack delivers the same experience in aural form. Despite the occasional chiptune, it’s not a retro soundtrack, but it’s absolutely overflowing with retro energy. The album is buoyant with optimism and vigor, with “Life in a Pot,” “Saka no Machi,” “Strange Quest,” and the title track being particular highlights. Even tense boss themes like “Rust” are still undeniably groovy. It’s not all sunshine, though. The jaunty tone gradually transitions into more melancholy material, and the final one-two punch of “Iron Carbine” and “Salvation” delivers a bittersweet payoff. It’s an instant classic, one of those rare releases that fully embodies the joy and pathos that video games can deliver.